Katie Gee was 18 when she was doused in acid by strangers while volunteering in Zanzibar. Five years (and more than 50 operations) on, she shares her long road to recovery – and why she’ll never have closure.

Working out in her local gym recently, Katie Gee spotted a woman walking in her direction, holding a plastic cup. ‘The gym provides paper cones for water, so when I saw the plastic cup, immediately my heart started beating faster. I was shaking, thinking, “Why are you holding a strange cup? Why are you walking towards me? What are you going to do?”’ Katie recalls. ‘Of course, she just walked past me, but for a moment all this panic was triggered and memories came flooding back.’

It sounds an unlikely incident to spark such fear but not when you know the story of Katie’s past five years. In August 2013, she and her best friend Kirstie Trup, both 18 and waiting for their A-level results, volunteered to teach underprivileged children in the apparently idyllic Tanzanian island of Zanzibar. On the last evening of their month’s work, the friends were walking to a restaurant in the island’s ancient capital Stone Town when two men pulled up beside them on a moped. The passenger smirked, pulled out a jerry can, doused them in battery acid then drove off.

‘At first I thought it was boiling coffee but the bitter smell was so strong I realised it was acid,’ Katie says. ‘I was in agony, burning everywhere as though I’d been stung by wasps – but 100 times worse – all over my body.’ From that moment, her life was transformed. From a carefree teenager, she became a depressed young woman with more than 30 per cent of her body covered in burns. She’d been preparing excitedly to start studying at Nottingham University but, instead, life became a constant round of surgeries – she’s undergone more than 50 operations to date, not to mention many minor procedures. 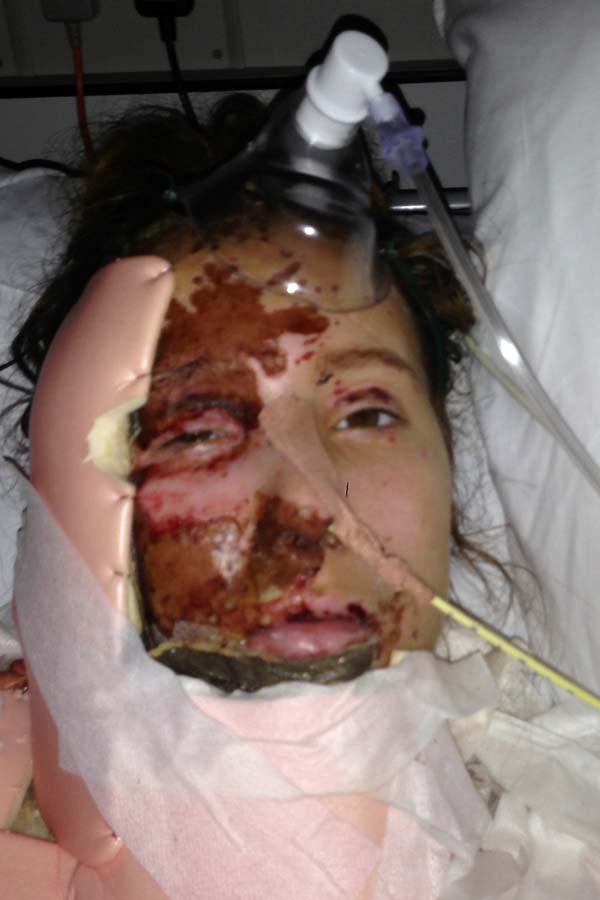 One of the first surgeries involved removing Katie’s damaged right ear. When we meet, in a restaurant near her North London home, she tells me happily that doctors have just given her a new one. ‘It took three 14-hour surgeries. First they made the new ear canal from rib cartilage,’ she says, pulling back her long dark hair so I can see the new, perfect version. ‘Then they diverted a blood vessel in my head and took skin from my legs. The surgeon even added a hole in the lobe, so I can wear an earring again.’

Katie looks elegant in a black sleeveless jumpsuit, apparently tanned (‘That’s out of a bottle. I can’t sunbathe – it makes the scarring worse’). The surgeons have done magnificent work. You are first drawn to her pretty brown eyes and high cheekbones. Only as she talks do you notice how her skin is bumpier on the right side and her eyelids (had she not blinked as the acid splashed, it would have blinded her) and lips are slightly swollen. Her chest is scarred, as is her right arm. She looks gorgeous but it’s easy to see how any 23-year-old woman would feel hugely sensitive.

Katie has mostly kept silent about her ordeal but now – having graduated with a 2.1 in sociology from Nottingham, and started a high-flying job in commercial property – she has decided to discuss it through her YouTube channel. ‘It’s to raise the issue of diversity, to say, “Don’t keep people who have scars off our screens”,’ she says. ‘But I also want to help anyone who’s been through trauma, to show them you can come out the other side. It doesn’t have to ruin your life.’ 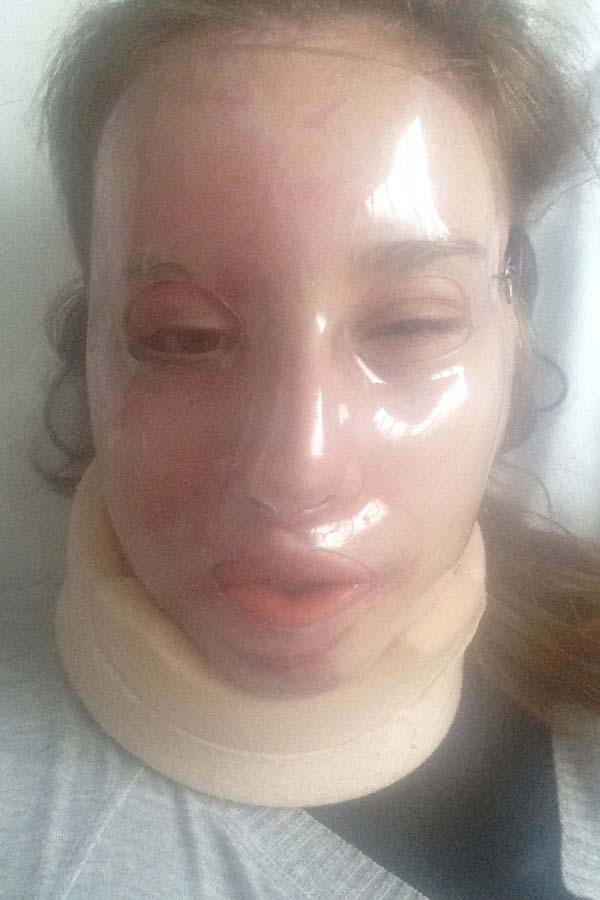 She has recently become a champion for Changing Faces, a charity that campaigns for people with facial disfigurements, and modelled this summer for Rebecca Violette, a label that challenges perceptions of visual differences. Katie also saw her beauty diversity campaign #SettingTheStandard go viral on Instagram, as women shared photos of their flaws.

But for years Katie found it hard to feel so positive, constantly revisiting that night in Zanzibar. ‘It felt like my face was falling off,’ she says. After being attacked she ran to a nearby restaurant and stood under a shower tearing off her clothes, screaming for help. Two tourists she calls ‘our saviours’ found her and Kirstie, who was washing herself in the sea, and took them to the nearest hospital. ‘It was so rundown, with just one nurse on duty who gave us packets of saline to pour on the burns.’ When that ran out, the girls headed to a nearby hotel where they sat for hours under the rooftop showers. ‘We were freezing, shaking with shock. I was wrapped in sheets and towels and was vomiting from the pain.’

The tourists helped put the girls on a plane to mainland Tanzania, then a medical evacuation flight was organised to London. During a refuelling stop Katie saw herself in a toilet mirror. ‘I broke down. My face was swollen, my right eye was completely shut. Everywhere the acid had hit was black and purple,’ she says. 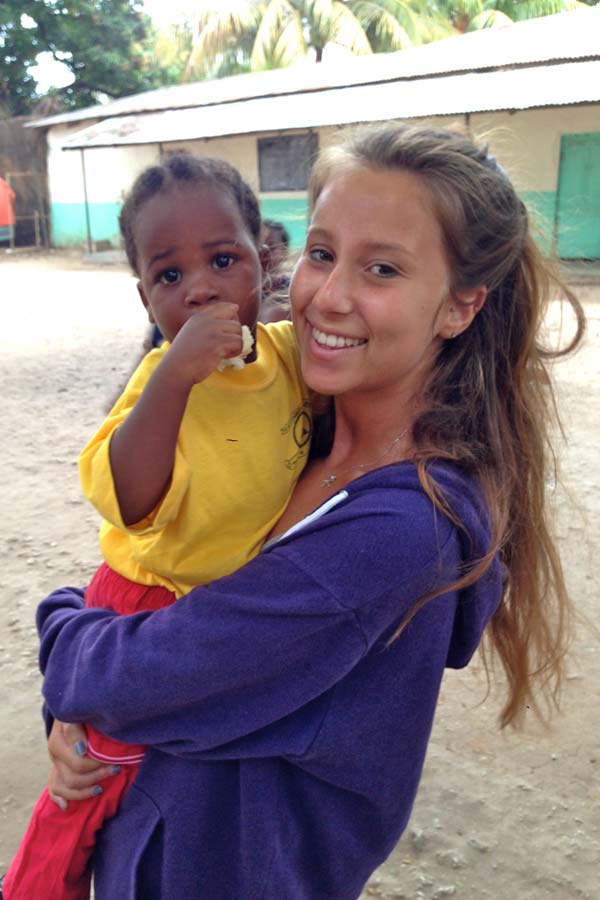 On arrival the girls were taken to the burns unit at the Chelsea and Westminster Hospital. The following morning Kirstie – who, having been standing further away from the attacker, was less severely injured – went home. Katie, meanwhile, was being prepared for a seven-hour procedure to remove all the burnt skin, then wrapped head to toe in bandages. ‘The doctors sat me down and said: “This is going to be a long road to recovery.” I was so sad and scared,’ she says. ‘I was also completely out of it from the painkillers and anaesthetics, and I was being fed through a tube because my throat was too swollen to eat or drink.’

In small ways Katie tried to cling to her former outgoing personality, for example, by refusing to let doctors take skin from her scalp for grafts as it would mean shaving her head. ‘I wasn’t ready for that. My hair was the only thing that gave me the confidence to leave the house. I was so insecure that I would put my hair in front of my face. The doctors probably thought I was the most difficult patient in the world but it was the right decision.’

The bleakness of her situation only sank in after Katie was allowed home, though still returning to hospital every day for treatment. ‘My friends had been great but their lives went on and many of them were off to university,’ she says. ‘I should have been going, too. Instead I was at home alone looking at their photos and not knowing what I would do with my life. The isolation was unbearable. In public I avoided all eye contact and wouldn’t speak to anyone.’

Gradually, with the help of therapists, Katie’s outlook became more positive. A year after the attack she had taken up her delayed university place, at first doing all the work at home, later occasionally visiting Nottingham for lectures. ‘I felt so self-conscious; what if people stare? What if they ask questions? Now I’m not fazed by people looking; I’ve realised they’re not thinking “Eurgh”, they’re just curious, and I’m happy to answer anything.’

After three years of being too frightened to go out at night, Katie found the courage to attend a party in a club. ‘It was the first time since Zanzibar. I was so worried but the reality was fun. I’d applied a full face of make-up and I felt normal. A huge weight lifted from my shoulders.’

Throughout, Katie and Kirstie have remained close, although Kirstie required only one operation and went to university a month after the attack. ‘Naturally, that was really hard for me,’ Katie says. ‘But we have a pact – we will never fall out over it.’ 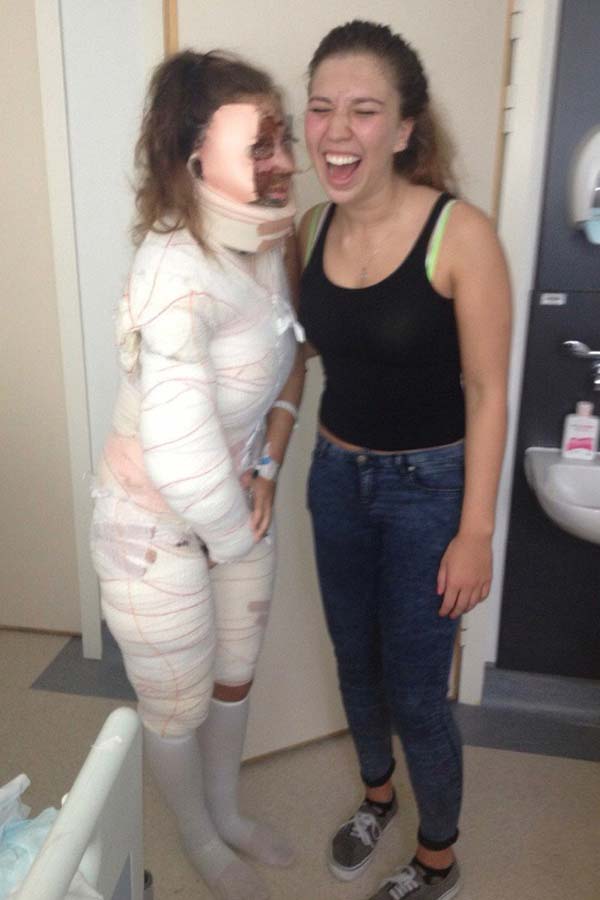 Despite Katie and Kirstie giving the police detailed descriptions of their attackers, the assailants have never been caught. Katie says she never really expected justice. ‘The setup was so year corrupt. The Tanzanian police never replied to emails; meetings with Scotland Yard came to nothing. They probably know who did it – the island is tiny, everybody knows everybody – but they’re all family so I don’t think anyone will ever come forward.’

There was speculation that the girls, who were modestly dressed in baggy trousers and loose tops, were targeted because they were Jewish, when the majority of the island’s population is Muslim. ‘No one knew our religion,’ says Katie. ‘And a month later there was an acid attack on a Catholic priest. I think it was because we were two young, vulnerable, non-Muslim white girls.’

Katie’s family – her father Jeremy, who works in property, her mother Nicola, who is a teacher, and her two younger brothers – have finally come to terms with the trauma. ‘For a long time my mum suffered terrible guilt about letting us go to Zanzibar, but now she can live with it.’ Nicola was especially upset when shortly after the attack a therapist asked Katie if she feared she’d never find a boyfriend. ‘Mum was furious that the idea was put in my head when it wasn’t yet an issue. It is something I speak about with friends – I’m single and, of course, I hope I’ll meet someone. It might not be the same person as before the attack, but that’s probably a good thing.’ 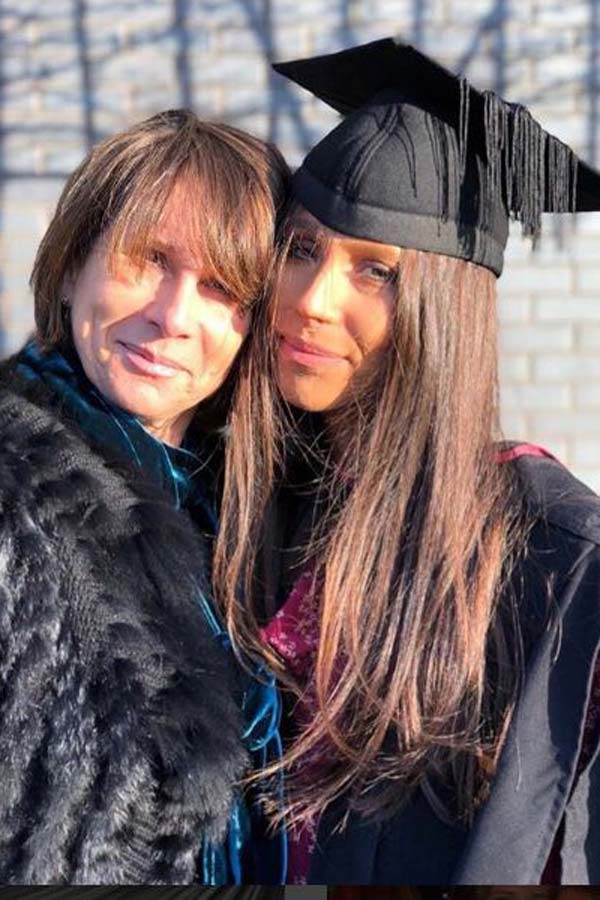 Katie is far from fully healed, either physically – there will be more operations to come – or emotionally. Her lips quiver occasionally as she tells her story, and her eyes are mournful. ‘There’s never closure, but time passes,’ she says, ‘and right now, I’m in a good place.’

Having always dreamed of travelling the world, she has ruled out returning to Zanzibar (‘Why would I? There are so many beautiful places to go to’) but recently enjoyed a US road trip with friends and is bursting with pride at coming through six rounds of interviews to win her new job. ‘Before the attack, I wasn’t focused, I just wanted to have fun; now I definitely work harder. My attitude is that I could die tomorrow,’ she says. ‘Life was bad for such a long time. Now I just want to have a good one.’

Don’t stare. If you’re interested in knowing why someone is scarred, introduce yourself and ask about it in a nice way.
Do pick your moment. If I’m on the tube or eating, don’t come up to me and ask me about my skin. I’ll be in a rush, paying for petrol and strangers come up to me asking, ‘What happened to you?’ Frankly, it’s annoying.
Don’t praise our bravery. People tell me that they could never have gone through what I have. My answer is, ‘I didn’t have a choice!’
Don’t touch our scars. It’s very intrusive. When my friends at university helped me change my dressings after surgery they always asked if it was OK to touch me.
Do ask us how we are. I don’t bring up my scars in case friends don’t want to talk about it; I’m paranoid that I’m complaining too much.
Don’t say, ‘It could have been worse’. The recovery is the hardest thing I’ve been through.