Poised, polished and perennially fashionable, the Duchess of Cambridge never puts a foot wrong. So what’s her secret? Royal expert Claudia Joseph explains how it’s all down to three simple rules.

Amid the recent chaos weathered by the Royal Family, there is one member of the Firm who outshines the rest: Kate, The Duchess of Cambridge. Throughout it all, Kate has remained poised and professional while inspiring millions with her enviable sense of style. So much so that she has just been voted Britain’s most fashionable Royal by the Fashion Retail Academy. Some fashionistas have suggested that a rivalry between Kate and her sister-in-law, the Duchess of Sussex, had sparked her new look, but I believe that she has finally found the confidence to be herself. As I discovered when I wrote my book How to Dress Like a Princess, Kate has become a modern icon.

Perhaps Kate has taken notes from her grandmother-in-law for her first commandment. The Queen is known for her thrift, and the Duchess echoes this with her penchant for affordable labels. The 2019 Cambridge Christmas card featured her wearing a teal dress by Boden. In the sale for £60, it promptly sold out. Last month, the black and white check Zara dress she wore on a visit to Bradford, reduced to £15.99, sold out in three hours, with some shoppers posting it on Ebay for £125. And recently she’s set social media alight by rewearing a pair of £1.50 Accessorize earrings.

Standout Kate dazzled in a gown by British label Needle & Thread at the recent UK-Africa Investment Summit at Buckingham Palace.

Bargain Kate was ahead of the curve when she picked this Zara hound’s-tooth dress. It originally cost £89.99; when she wore it last month it had been reduced to £15.99. Needless to say there was a stampede, and it sold out in hours.

The Duchess demonstrates how to add dash with less cash

Clever Kate’s £38 pumps are from children’s store Trotters – George and Charlotte have the same ones!

Thrifty Kate wore these £1.50 earrings from the Accessorize sale for a visit to Stockwell Gardens Nursery last month.

Knit at a snip Zara strikes again: Kate chose this £39.99 red knitted dress with statement sleeves for a visit to Port Talbot.

High-street hit The Duchess paired a blue traditional kurta tunic and trousers with a pair of £23.99 New Look courts.

The Duchess wears her clothes again and again, and the second of her commandments was on show during October’s tour of Pakistan. Repeats included an Emmy London clutch and pumps, plus a leather vest from British label Really Wild, last worn in 2016. But it was her star turn at the Baftas, where she wore a gown recycled from 2012, that exemplified how Kate refreshes a piece: the sleeves were tweaked for a more structured shape. Reworking is a typical Kate tactic: for example, taking up necklines, and on the Pakistan tour she even turned a dress into a top.

Va-va-versatile When Kate first wore this £550 Beulah London dress she amped it up with a glossy belt and pointed pumps from Gianvito Rossi, one of her go-to brands. Later that year, she toned it down with a fabric belt.

Sleek Kate first wore this Catherine Walker dress with a black hat. When she wore it again for Holocaust Memorial Day, she tied back her hair for a more modern look.

Stunning Kate first dazzled in this Alexander McQueen dress at a state dinner in Malaysia. She made headlines again this year when she wore a tweaked version with more fitted sleeves and shoulder pads to the Baftas.

Perennial pumps The Duchess recycled her favourite Emmy London shoes in the Pakistani national colour on the Royal tour.

The Pakistan trip was the perfect showcase for Kate’s third commandment. With help from her stylist Natasha Archer, the Duchess’s wardrobe championed British designers and respected the host country in modest but stylish outfits. She wore dresses by Jenny Packham and Catherine Walker in varying shades of green and white, the Pakistani national colours, as well as a dazzling array of traditional costumes.

Shimmering For a reception at the Pakistani National Monument, the Duchess chose a bottle-green gown by one of her favourite eveningwear designers, Jenny Packham.

Sleek chic In a Hicks & Brown fedora and Roksanda coat for a Sunday church service on the Sandringham estate in January.

Tribute In a navy Alexander McQueen suit for her trip to Loughborough’s Defence Medical Rehabilitation Centre this month.

Modern For a recent trip to Bradford, Kate swapped her usual clutch for an on-trend top-handle bag by Aspinal of London.

Stately Wearing the Royal Victorian Order over a McQueen gown with the Queen’s tiara at a Buckingham Palace reception.

How would these fashion insiders style Kate?

The Duchess has a classic way of dressing. Her clothes are very fitted, and while I think it’s nice to see her lovely figure, I’d love to play with the proportions of what she wears. For a dress-down day I’d like to put her in wide-leg pants, cool trainers, a white shirt and a fitted jacket.

Former editor of Vogue and Mail on Sunday columnist

Catherine looks good in anything. I’d like to see her experiment with some of the younger British designers who could make her some terrific formal clothes. Michael Halpern’s sequined styles would adapt brilliantly to the red carpet, and Richard Quinn, who won the Queen Elizabeth ll Award for British Design, has beautiful florals.

The Duchess is so chic that it feels unnecessary to try to recommend what else she might wear. Although, having said that, I think she would look terrific in Vivienne Westwood. She has such a strong sense of personal style that I’m sure she could carry it off with conviction.

Kate is a huge fan of prints, embroidery and flowing dresses, so I’d love to see her try a few classic, minimalist looks. It would be great to see her channelling Princess Diana in shapes that are feminine yet strong. I’d like to dress her in this Jil Sander-inspired suit – a structural shape in a pared-down palette, with sleek accessories. 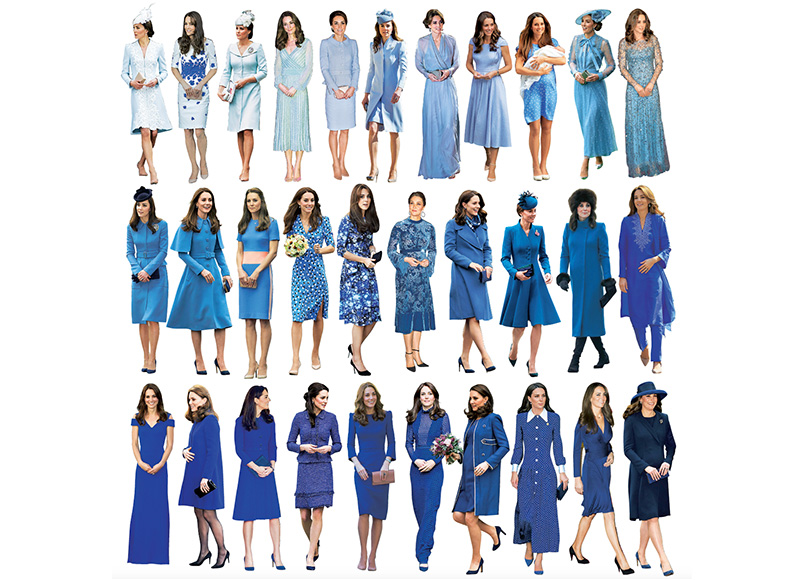 From her engagement announcement to the birth of Prince George, Kate likes to celebrate her milestones in blue. And this might not be a coincidence. According to colour analyst Melissa Nicholson, who advises her clients on what shades to wear based on their complexion, hair and eye shades, Kate best suits a ‘summer’ palette, which means she looks better in clothes that have a cool blue tint rather than a warm yellow one. ‘I would say her best shades are French blue and bright navy,’ Melissa says.

Claudia Joseph is author of How to Dress Like a Princess: The Secrets of Kate’s Wardrobe (Splendid Publications, £12.99)

Our top pick of white fashion trainers from just £12

Sainsbury’s pink dress is a major hit with influencers – and...

A fashionista’s road trip: On location in the Cotswolds with the...

4 fashion brands that are enjoying a retro revival

9 of the best budget-friendly bridal collections

Kate Garraway’s £12 earrings are the accessory every wardrobe needs