Kate Middleton’s wardrobe is full of must-have staples that can work in any woman’s wardrobe. For example, the humble blazer. Kate is clearly a fan, often seen sporting a smart blazer over a tee and jeans or trousers. In fact, it’s somewhat become her go-to look for those in-between occasions that don’t require a ballgown but where her beloved trainers and chic tracksuits or jersey jumpsuits won’t quite cut it.

The duchess sported a couple of great blazers during her appearances in the stands at the Euro 2020 football games, namely a striking red one. And now, she’s just stepped out wearing the very same red ZARA jacket.

Kate most recently sported the blazer while visiting the Copenhagen Infant Mental Health Project at the University of Copenhagen on 22 February. She paired the striking jacket with a white frill neck blouse, smart black wide-leg trousers, a court shoe and black Aspinal bag.

The postbox red design in question also made an appearance during England’s big game against Germany back in June 2021. She sported the vibrant find with a white tee and smart trousers as she attended with husband Prince William and eldest son Prince George.

It was then revealed shortly afterwards that this jacket was actually from none other than ZARA; cementing our opinion that the duchess can’t get enough of the high street. The blazer is made from a tweed material and features gold buttons, a chic longline collar and a nipped in waist.

Unsurprisingly, the blazer style flew off the shelves after it was spotted on Kate Middleton, meaning most shoppers lost out. However, luckily ZARA has another bright red blazer that bears a very close resemblance to the royal’s. 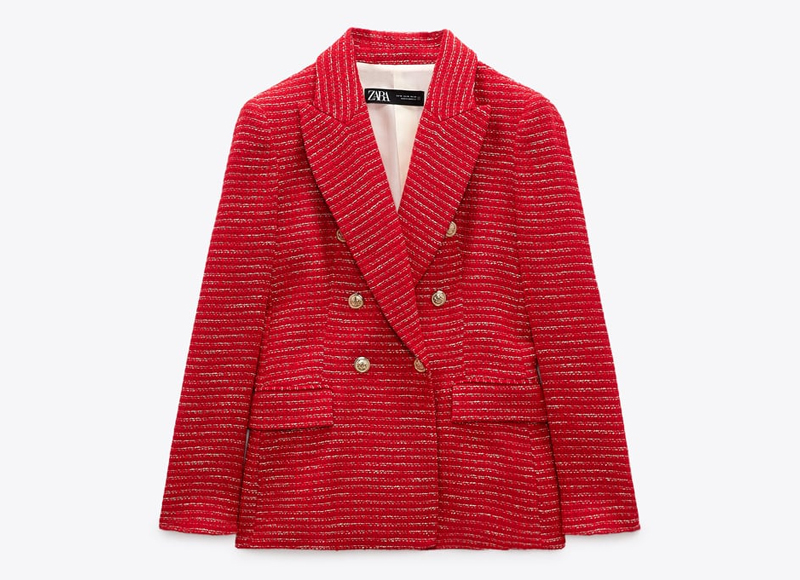 This updated textured design also features gold buttons and a lapel collar like Kate’s, but now has a subtle white stitch running through it.

Snap up a Kate Middleton-style blazer quickly before it reaches sell-out status, too!