It’s only in retrospect I notice the warning signs. A slight ‘gravid’ feeling in my lower abdomen. A little bit like how it used to be just before a period. But I’m sure it’s nothing. And besides, I had a uterine scan in 2018 and it was fine. It’s nothing. Calm down.

Stop focusing all the time on me.

But then there’s the bleeding. Only very slight bleeding, true (a chemical bleed is a normal side-effect of combined oestrogen/progesterone HRT treatment). However, it has become more frequent in the past six months. Often, I’ll look down at the stain in my knickers and think, ‘Wait? What’s that doing there? Again?’ 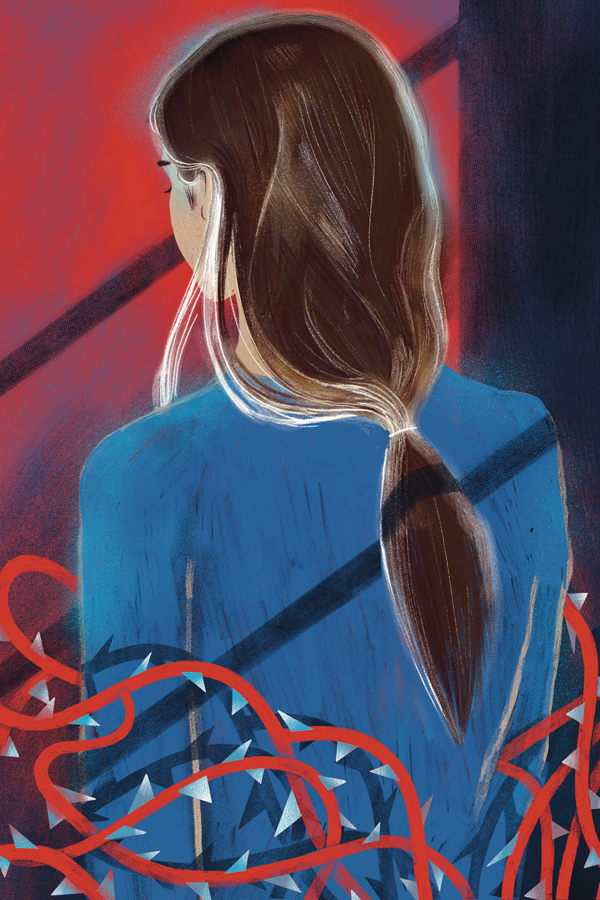 In the back of my mind, I feel the late Professor Studd’s finger wagging at me. The Professor oversaw my HRT after I had breast cancer in 2007– and recommended that I take progesterone ten days a month. But I’ve let it drop to seven days, sometimes even less, because I don’t like the way it can make me feel bloated and woozy.

I know I need to take it because it counteracts the build-up of oestrogen (which can thicken the uterine lining and in certain cases lead to endometrial cancer); I know it’s a non-negotiable choice for those, like me, who still have a uterus. But I figure it all balances out given I take slightly less oestrogen than prescribed.

Still, to rule everything out before I go on holiday, I call the doctor’s office for a uterine scan. It’s been nearly three years because of Covid – and, at 61, I’m meant to have them every year. The nice Italian man doing the ultrasound tilts his screen towards me so I can see what he is seeing. ‘But everything’s fine, right?’ I say, leaning round as best I can with my feet in stirrups.

A flicker of a grimace as he points to the screen. ‘See here,’ he says, pointing to a bulge: my uterine lining is thicker than he expected it to be given my age and history. I repeat my question. ‘Everything is fine, though, right?’

‘I don’t know,’ he says carefully. ‘It could be nothing, but you need to have some further tests to rule out certain possibilities.’ A minuscule bullet lodges in my brain. It couldn’t be… could it?

Straight afterwards, I head to Harley Street with my results in a brown envelope. The doctor has such a sympathetic bedside manner I find myself bursting into tears the moment I sit down. Damn. I so didn’t want to do that.

He looks through the results and then, placing his fingertips on his desk, brightly says he wants me to have something called a hysteroscopy, which involves having a tiny camera inserted through the cervix up into my womb to do a biopsy of any abnormal-looking growths.

I clutch the nurse’s hand throughout; it’s not nice at all, on the painful side of uncomfortable, but everyone is so sympathetic and kind. Hopefully, this will be the end of it. The doctor, who is disquietingly handsome and almost young enough to be my son, says it is fine to go ahead with the week’s holiday we have planned as the results are not in for another ten days.

Off we go to Greece. The beach-house is tiny, and I don’t want my eldest son, who is with us, to hear me, so I secrete myself in a bedroom when the doctor’s secretary calls a day earlier than she said she would and asks if I can get on Zoom with him now.

The results of the hysteroscopy have come through and it looks almost certainly like endometrial cancer. I sit down with a towel wrapped round my bathing suit to absorb this latest piece of information. I’m in a daze and only half listening to what he is saying.

Endometrial cancer is more likely to occur in post-menopausal women; the biggest risk factors relate to the amount and duration of exposure to oestrogen through a woman’s life. The next step is an MRI to see what kind of tumour it is, followed by a laparoscopic hysterectomy to take out not just my uterus, but my ovaries, fallopian tubes and cervix.

Oh. Still in that glaze of incomprehension, I ask him if I need to come back from holiday early. Oh no, he says with an almost-laugh, it won’t make an iota of difference– the best thing you can possibly do is forget about this and enjoy the rest of your holiday.

I want to relay all this to my partner immediately, I want a bear-like hug from him, but he is outside on the deck with my son and his girlfriend, and it will look odd if I pull him away.

The MRI, which I have the day I get back from Greece, reveals it is only stage 1 and has not spread. We got it in time. No treatment necessary, just the hysterectomy. The world tilts back to normal. How lucky am I? I have no emotional ties to my reproductive organs. They have done their job. As I am wheeled down to the operating theatre, I feel a sense of euphoria: by the time I wake up, I can put this whole thing behind me.

But the pathology results of my hysterectomy reveal it’s not quite what we’d thought. Cancerous cells appear to have migrated into the cervix and come ‘within 15mm of the serosal surface’ [of the uterus], so my tumour has changed from grade I to II. It has gone and there is no evidence of ‘lymph or vascular’ invasion, but there is no way to know for sure if I’m totally clear. For that reason, the doctor strongly recommends further treatment. The fat lady still has to sing.

That night as I brush my teeth, I look at the blue and white Estradiol HRT pump dispenser sitting there innocuously beside the basin and hurl it in the bin. Was this my fault? Something entirely preventable had I been taking more progesterone? Was I playing Russian roulette by taking HRT (with my cancer background) in the first place? Why, why, why didn’t I have a prophylactic hysterectomy [to remove the ovaries and fallopian tubes], which Professor Studd told me that American women routinely have after treatment for breast cancer?

But my doctor thinks there’s a chance it’s been around there for a while and that it may well be something genetic rather than my fault for not taking enough progesterone.

At the same time, I am not your average endometrial cancer patient. I’m not overweight. I didn’t take tamoxifen, the drug commonly prescribed for oestrogen-positive breast cancer (yes, a link has been shown). And I’m ‘only’ 61. I suppose you could call me unlucky. It’s certainly beginning to feel this way.

My oncologist assures me that having chemo would not increase my chances of survival or prevent it from coming back again. We spotted it early, I’m fit and healthy and, of all the cancers to get, endometrial is probably one of the ‘best’. He warns me, though, that pelvic radiation might not be quite the walk in the park it was for breast cancer. For a start, the course lasts five weeks. For a second, the area irradiated is larger. And for a third, you have to have a full bladder during treatment. As for the side-effects – diarrhoea, constipation, indigestion, soreness, fatigue, cystitis, ‘sunburnt’ vagina, discharge – they shouldn’t kick in until the third or fourth week, and if they do, ‘we’ll manage it’. I can, as it were, carry on as normal.

But they all take a back seat to the crippling nausea, which strikes me down so violently after just one session that I think it must be a stomach bug. On my second day of treatment, it is so bad I cannot be treated because I keep having to rush to the loo to vomit. A week later, drinking enough water to fill my bladder without wanting to chunder becomes the most important mission in my life.

Three weeks in, more than half a stone down, the sickness is still there with a vengeance and the diarrhoea is biblical.

You know that old person constantly in fear of being ‘caught short’? That’s now me.

Guilt, embarrassment, reflection consideration of others, fear of looking like a crazy person – nausea like this cancels out EVERYTHING. I spend at least five hours a day prostrate on the sofa watching Selling Sunset and Below Deck. I can’t handle anything more taxing.

For the two last sessions, I have brachytherapy: a form of internal radiotherapy as opposed to the external beam radiation therapy (EBRT) I’ve had up to this point. Also used for cervical and prostate cancer, brachytherapy involves having what looks like a large Tampax or vibrator inserted into the vagina to deliver radiation more precisely to the target area. It takes even less time than EBRT and isn’t painful, but the ignominy of it all – having one’s feet in stirrups in front of the nurses’ viewing platform with this thing up one’s you-know- what can’t help but feel slightly… kinky.

And then it is over. Within two weeks the sickness has gone, and my appetite is back with a vengeance. I am my normal self once again. As for missing the effects of HRT, to be honest I feel no different to how I did when I was on it. Some women are prescribed progesterone after endometrial cancer, but my oncologist doesn’t recommend it for me. Of course, I cannot take oestrogen any more. Oestrogen is my enemy. But what is life going to be like without it, I wonder?

As I write this, I cannot detect any noticeable difference, but that may very well change. Is it only a matter of time before the hot flushes, the insomnia, the sense of doom and so on, return? And I’m one of the lucky ones. What of you out there who feel, quite literally, suicidal without your HRT?

Back to the prophylactic hysterectomy. Shouldn’t our doctors be recommending more vigorously that we have them? There is no conclusive proof that it was a lack of progesterone that caused my cancer – that I would have got it whether I’d been on HRT or not– but if I had my time again, I would almost certainly have had one. And maybe I wouldn’t have even taken HRT in the first place.

If there is a take-home message I can offer, it is this. If your menopausal symptoms are mild, don’t feel societally coerced to take HRT. And if you do end up taking it, take it exactly as your doctor prescribes – don’t be an idiot and ‘wing it’ like me. Most importantly, insist on an annual uterine scan. And if you bleed, whether you are taking HRT or not, you must, must, must tell your doctor. Straight away. You are not making a fuss. You are taking care of yourself.