After years of being ‘knee-deep in nappies’, LESLEY AARONSON became creative director of her husband Denis’s fledgling business, helping to turn it into a global brand. She tells Josephine Fairley how her flower-powered aesthetic has propelled their success. 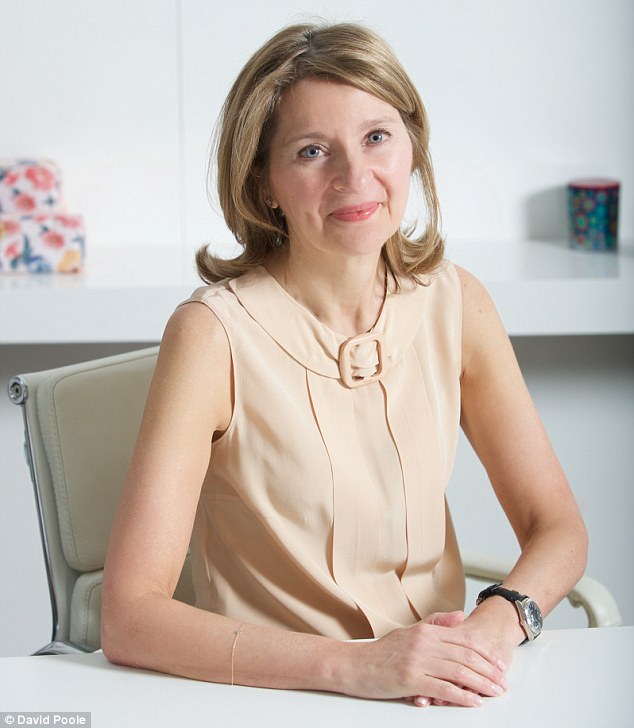 Lesley Aaronson got her job as creative director of beauty brand Heathcote & Ivory by schmoozing up to the boss. But that’s OK because she also cooks with Denis Aaronson, lives with him and is mother to their four grown-up children: Sophie, 32, Georgia, 28, and 24-year-old twins Harry and Imogen.

Do not, however, write this off as nepotism. Because if there is one woman who understands the love of flowers, colour and floral scents that seem to be interwoven into the British DNA – and has harnessed this affection to help put Heathcote & Ivory on the global beauty map in over 35 countries – it is this softly spoken petite dynamo.

Years earlier, ‘trapped’ at home in London’s St John’s Wood with four small children and a husband who used to disappear for days at a time to oversee the Devon factory, this was a role that Lesley would never have imagined for herself.

‘Back then, it was Groundhog Day, every day. I was stuck at home with the children, walking them to school, to piano and violin lessons, ballet – which, with hindsight, was madness because none of them plays an instrument now, and none of them is a ballerina. Having supportive female friends got me through: I’d be looking after a sick child and have to ring someone in a panic to say: “I can’t get to the school.” And they’d say: “Don’t worry; we’ll pick her up for you.”’

But even though she was ‘knee-deep in nappies’, Lesley always found time to discuss Denis’s business with him. He founded Heathcote & Ivory in 2000 – coming up with a name for his fledgling toiletries brand that conveyed a feeling of instant heritage akin to Fortnum & Mason or Charbonnel et Walker.

‘Occasionally, I’d escape to the odd trade show to spend some time with Denis. Then one day, I remember sitting in the car on the way to Harrogate Home & Gift Festival with a box of brochures that had just been delivered. “Open them up,” Denis told me. So I did – and my face fell because they were really bland. Now, it’s not very helpful to be rude to your husband but he could tell I wasn’t that impressed. So he said: “If you can do better, you do it.”’ The next day, I was out for a walk with a girlfriend and told her this, expressing my doubts, and she simply said: “Go for it.”’ 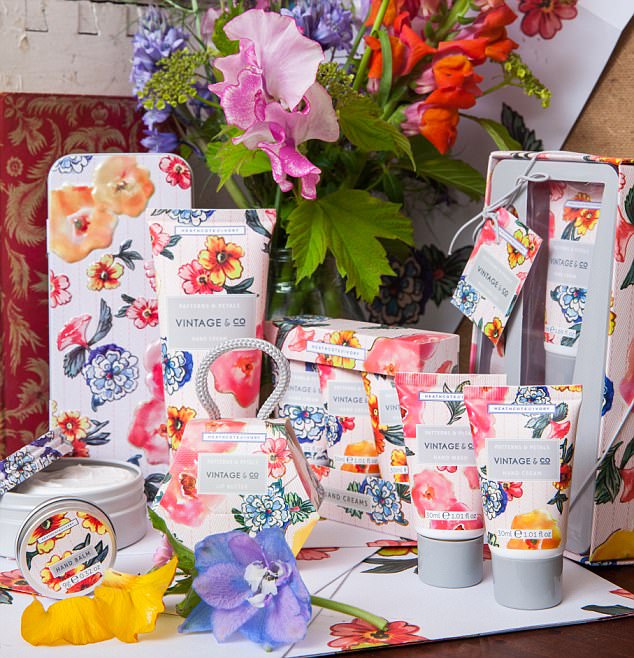 Relying on her strong visual sense – Lesley is a graduate of the Courtauld Institute of Art – coordinating copywriting, styling and photography, Lesley began to bring Heathcote & Ivory to life – to her husband’s delight and her own surprise.

‘Slowly, I sort of insinuated myself into the company. From twice-a-year catalogues, I started to be in the office more. Then, when my twins were around 13, I thought: you’re either going to be that woman helicoptering at the school gates or you’re going to seize the moment and say: “This is my time.” Denis does the bits that I’d be rubbish at – finance, strategy, operations – and allows me to focus on my strength, which is the creative side, via product development, branding and marketing.’

Lesley’s floribundant aesthetic was long-established. From childhood, she had been a compulsive forager in junk shops. ‘I started collecting Carlton Ware porcelain at the age of nine,’ she smiles. ‘I’d spend weekends rootling among the antiques stalls at London’s Camden Passage – and today there’s nothing I love more than a car-boot fair. I have clutter coming out of my ears – but as far as I’m concerned, if it makes me happy, it’s useful.’

Galvanising her love of vintage fabrics alongside a passion for flowers, Lesley began to come up with ideas for the many (delightfully affordable) Heathcote & Ivory ranges that now grace bathrooms (and downstairs loos) around the world – yet are made in the UK.

There are six main collections including Vintage & Co (inspired by that love of florals), plus the ‘bespoke brands’ which feature hugely successful collaborations. The so-English Morris & Co (a bestselling line at Liberty) brings a freshness to the often gloomy designs of William Morris. And Cath Kidston – ‘we were friends from when she had a curtain shop in Fulham’ – has been another highly successful partnership. 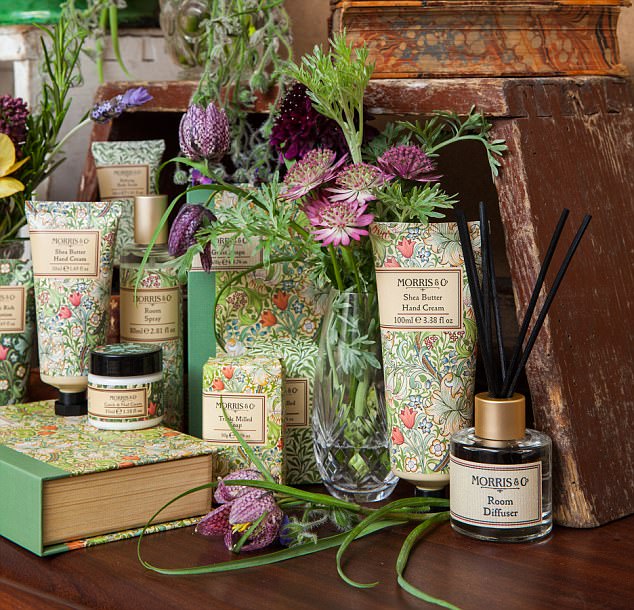 Most recently, Heathcote & Ivory teamed up with knitwear whiz Kaffe Fassett, whose solo show at the V&A almost 30 years ago was a first for a living textiles designer. This collaboration came about by chance one day when Lesley was visiting her favourite florist Achillea Flowers in London’s West Hampstead. Lesley’s eye was caught by a tall, elegant man, who, unbeknown to her, was Fassett: ‘He was a picture of calm, quietly picking out flowers by colour and then putting them together in a very focused way. I was mesmerised.’

Her florist friend Clare Emburey at Achillea introduced them. An idea was born and a name dreamed up: Kaffe Fassett Achillea. The resulting rainbow-bright boxes and tins (which are as close to a Kaffe Fassett original as most of us are ever likely to get) won Best New Design & Packaging at the Pure Beauty Awards 2015.

The range’s Achillea scent, meanwhile, is a unisex fusion of roses alongside bergamot, mandarin and fresh green leaves, underpinned by orange blossom, fig and oleander – all muskily spiced with a cedarwood base. Achillea’s Clare had the final say-so as to which of the three rose fragrances was green-lighted – although it is Lesley who works closely on development with the perfume houses. 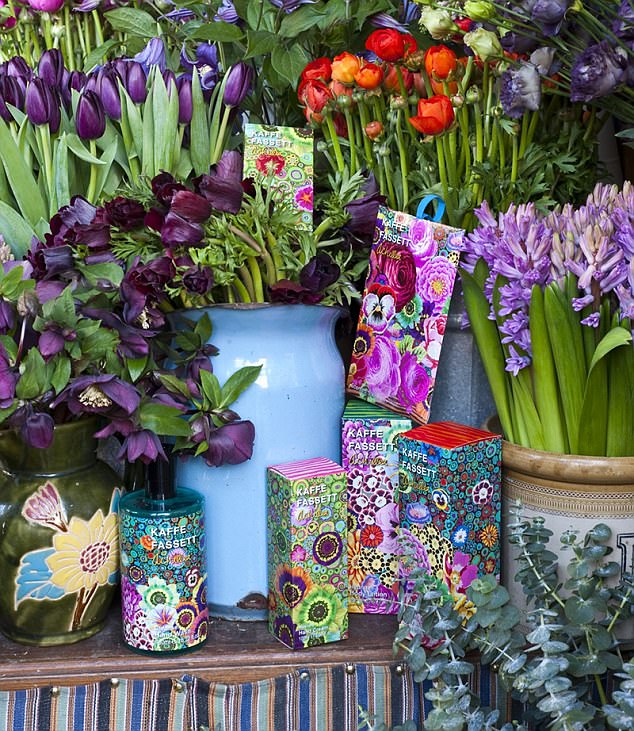 As for the Kaffe Fassett Achillea body lotion? Like everything Heathcote & Ivory puts its name to, it is deliciously rich in maringa, cocoa and coconut – yet products all have to pass what Lesley laughingly refers to as the ‘loo-door test. A cream mustn’t be so greasy that you can’t immediately open the door. As a woman and a mother, a sense of practicality is another thing I bring to this business,’ she smiles.

There’s now a team of 25 in the Primrose Hill office – organised non-hierarchically in an open-plan space so that everyone can share ideas (but with Lesley well out of Denis’s sight-line). ‘There’s a famous saying in the office that makes everyone smile – “Not now, Lesley”. I’ll sometimes be in a meeting with the team, telling everyone about a fabulous new idea I’ve had. But if Denis interrupts and says, “Not now, Lesley”, that’s my cue: I know it’s over, and the idea isn’t going to happen. The slightly annoying thing,’ she says, with the merest of shrugs, ‘is that Denis is brilliant – and is generally right.’

More than most couples who work together, though, Lesley gives the impression she and Denis have found a way to successfully mix business with family life, parenthood and grandparenthood (Sophie is now a mother of four herself). ‘You have to set boundaries. On holiday, we might schedule four hours one afternoon to discuss business. That means it doesn’t spill over into every minute of every day.’ (For more of Lesley’s wisdom on working with your spouse, see the box, right.)

Sweet peas, honeysuckle, roses, lavender, lily of the valley, dahlias, poppies, pansies – all have flourished on Lesley’s eye-catching packaging. The most recent is the Sanderson Archive Collection, which brings new life to classic designs by the British textile and wallpaper brand, following hours spent trawling through their archive of wallpapers and fabrics (astonishingly, samples still exist of every single design Sanderson ever produced).

‘Part of why we’re successful is that it’s a way of bringing the outdoors inside,’ she observes. ‘Let’s face it, you can’t be sad with a vase of flowers on the table – and I think we’ve come up with a way of capturing that feeling, even when there isn’t a fresh flower in the house.’ And she’s spot-on; cleverly, Heathcote & Ivory has tapped into the quintessential British love of fresh air and gardens – and an underlying (if often unspoken) need to reconnect with the senses in a high-tech, screen-dominated world.

Lesley exudes a quiet, understated sense of pride and fulfilment when she talks about how she graduated from full-time mother to the creative role which has flower-powered Heathcote & Ivory to become one of Britain’s best-loved bath and body brands (while sparing her from empty-nest syndrome). Men’s skincare (a separate new brand called Heath, which launched last month) is the latest venture – ‘an eye-opener for Denis, since he was a soap-and-water man. But there was no “Not now, Lesley” when I put that concept forward.’

Ultimately, she acknowledges, ‘there can only be one boss. At work it is definitely Denis.’ But the periwinkle eyes are twinkling as Lesley concludes: ‘However, at home, I am most definitely CEO.’

LESLEY’S GUIDE TO WORKING SMOOTHLY WITH YOUR SPOUSE

-Travel to work independently. ‘We never go to work together. If my car is being serviced, I walk. My journey into work alone is vital. It gives me time to listen to Radio 4 and collect my thoughts for the day ahead. It also helps define our independence from each other – that we are two individuals working at the same company rather than husband and wife. When I arrive I always say, “Good morning, Denis” – it marks the start of the working day.’

-Allocate work-free time when travelling. ‘Work trips are all-consuming, with crazy hours. But when we have dinner we do not discuss work. Then it’s back to the laptops.’

-Remove complex work matters from the boardroom. ‘Walking and talking is a useful method to discuss tricky work dilemmas while remaining calm. The fresh air has a very positive effect.’

– Respect each other and keep a sense of humour. ‘Try to develop a thick skin – this is a particularly useful mantra if I am being overenthusiastic and the “Not now, Lesley” directive is invoked.’