Step into old-world luxury at the Villa Sant’Andrea Sicily.

Perched at the edge of the sea, with magnificent views across a bay of glittering azure, is a divinely nostalgic hotel with impeccable manners.  As you enter the hotel grounds, the narrow road unveils lush gardens and a warm welcome from unerringly polite staff. 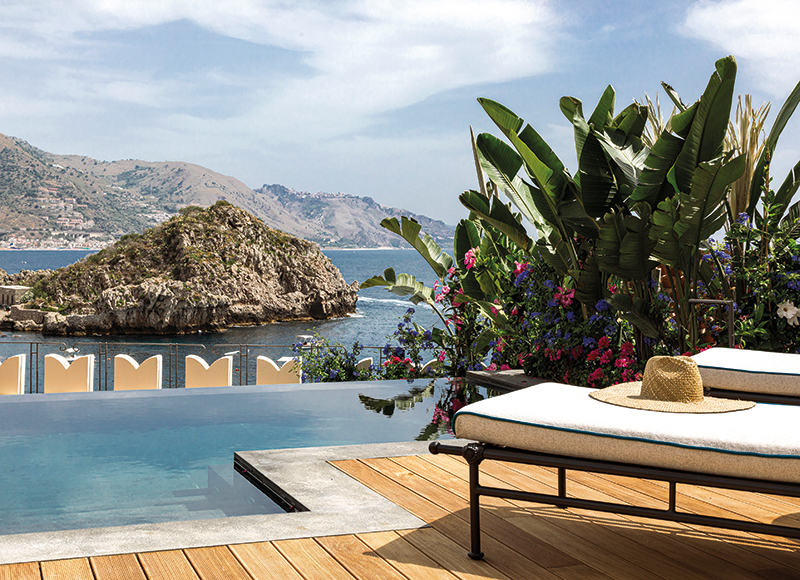 The Villa Sant’Andrea began life as a family home at the turn of the last century, it was only in the 1950’s that its owners turned home to hotel and, in the golden age of Hollywood, the Villa Sant’Andrea was born.  Oozing understated glamour and having played host to some of Hollywood’s most golden aristocracy (Richard Burton, Elizabeth Taylor and Francis Ford Coppola have all graced these hallways) it’s not hard to see why the chic and elite would be drawn here.

Rooms are rich with the scent of Ortigia, and savvy hotel toiletry hunters will be delighted to find a generous allowance of Acqua di Parma hotel miniatures in their bathrooms.  Opulent yet restrained, the hotel is a maze of marble floors, and irregular corridors that yield lush, well-appointed rooms with unrivalled views of the ocean. Lavish gardens, woven with stone terraces and pathways envelop the hotel by land, while elegant private terraces and balconies open out over the water. 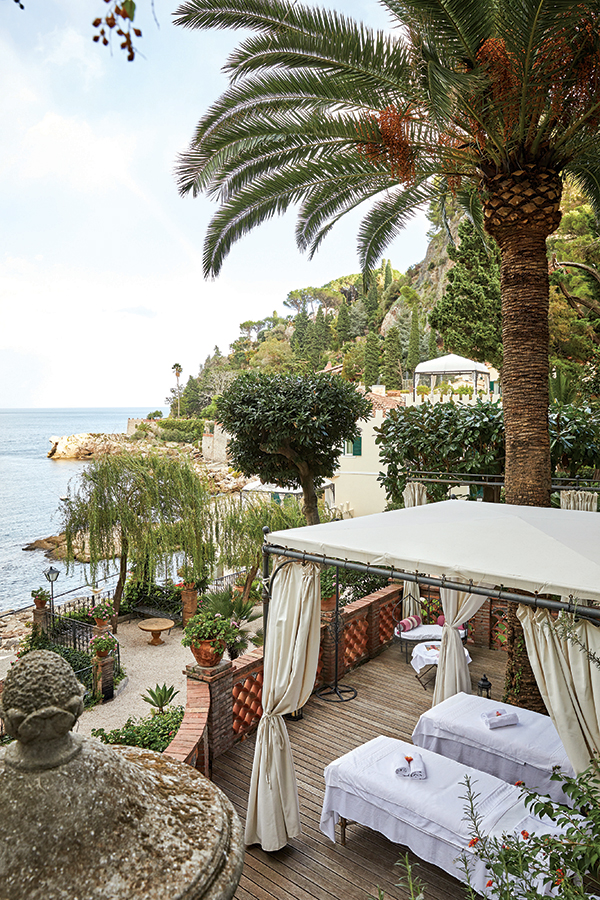 Within the hotel grounds there is much on offer, with a private pool, spa, and kids club as well as a private section of beach on the beautiful Mazzarò Bay.  I’d recommend the hotel’s speciality open-air massage which takes place under a gazebo on a secluded garden terrace above the beach.  I felt all my worries melt away under the guidance of firm, expert hands as I listened to the sounds of the sea. 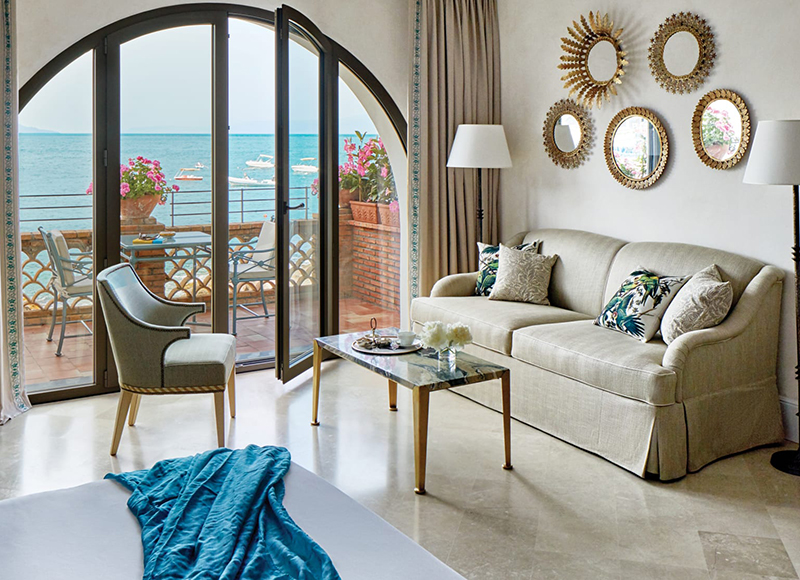 The hotel has its own restaurant, The Oliviero, as well as a large late-night terrace bar serving delicious stone-baked pizzas and cocktails. The menu at the Oliviero is exquisitely Italian, offering a plethora of fresh seafood and freshly made pasta, alongside an impeccable wine menu. 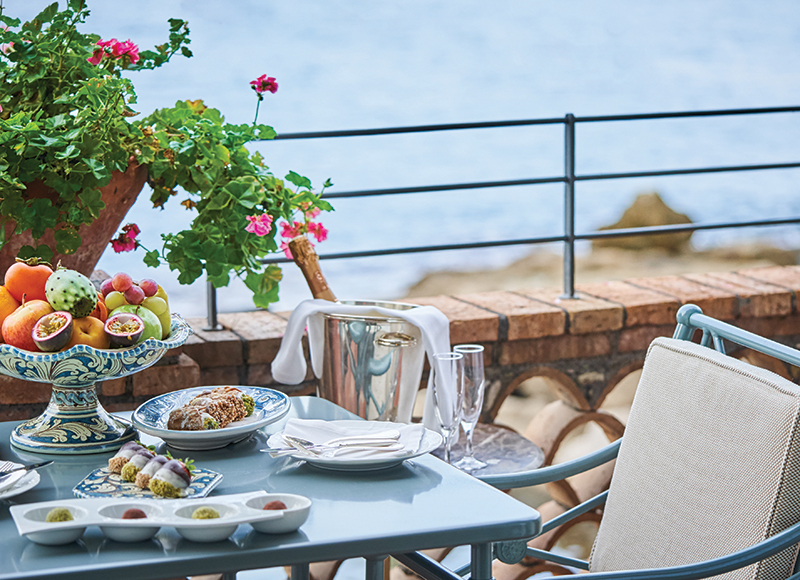 Breakfast on the terrace is not to be missed: it’s impossible to recreate the simple luxury of warm, dappled sunlight and salty morning air while you enjoy a glass of freshly-squeezed Sicilian orange juice.

What to do nearby

The hotel is located at the bottom of the beautiful medieval town of Taormina: a delight of winding stone streets and charming shopfronts. The ancient Greek theatre in the town’s centre is a highlight, and sits right next to the Villa Sant’Andrea’s sister hotel The Grand Hotel Timeo. Hotel guests can catch a free shuttle between the two hotels, so sightseeing, restaurants and nightlife are all within easy reach. 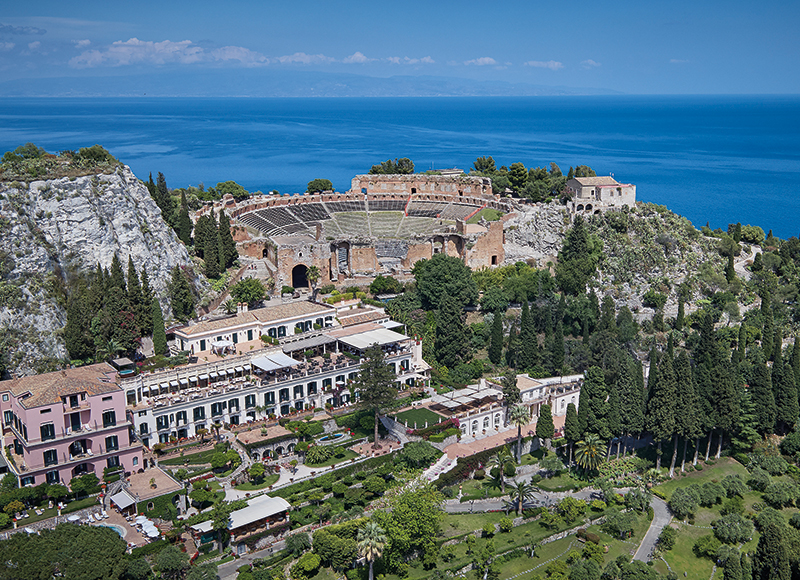 Villa Sant’Andrea is also ideally located for venturing out in Sicily, and guests can even take advantage of a complimentary boat trip up the coast, or take a spin on the hotel’s uber chic Dior Vespa scooter.  Less than an hour away are Mount Etna and the famous Circumetnea railway – the Villa’s original owner was Cornishman Robert Trewhella, a civil engineer who came to build the railway and fell in love with Sicily, leading him to build his family home here – which later expanded and became a hotel. 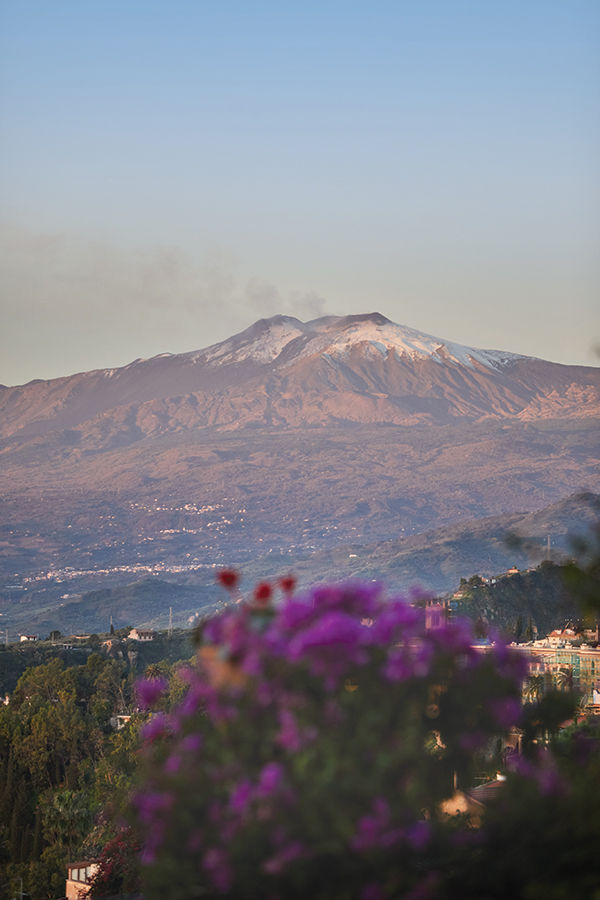 If you want to stay here you’ll have to visit in the spring, summer or autumn months as the hotel closes for the winter season. The Villa Sant’Andrea is the kind of hotel that exudes impossible glamour and calls to mind every dazzling Hollywood movie ever made. You can check in anytime between April and October but I can guarantee that you will never want to leave. 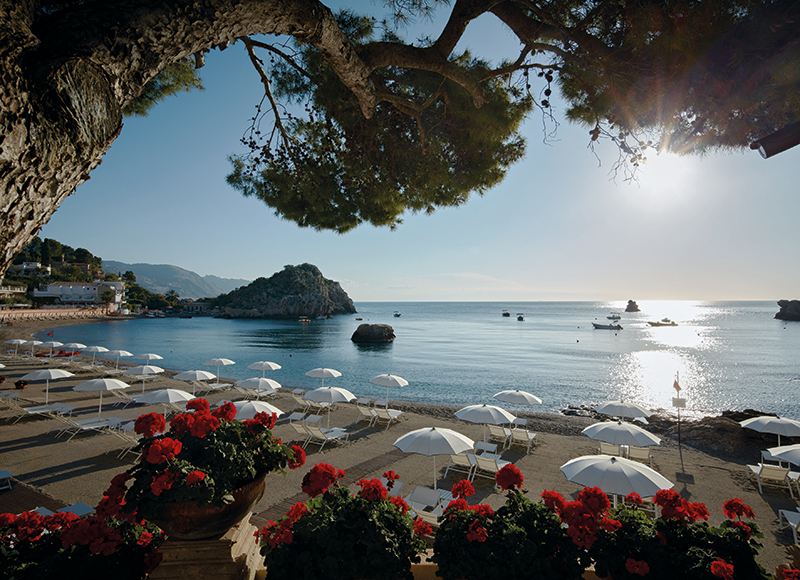 Prices start at £334 per night for a standard room. More info here.

READ MORE: Weekend breaks you can get to by train

The UK’s top 10 tourist attractions, as voted by the public