The impact of Holly Willoughby’s fashion choices is far reaching – when the This Morning presenter steps out in a particular item of clothing, it’s destined to sell out in mere hours and/or cause a frenzy of searches for related items.

So influential is Holly Willoughby’s style, global marketplace LovetheSales.com reports that, on average, Holly’s This Morning outfits have increased fashion searches online by 65 per cent since the beginning of lockdown back in March this year (despite hardly any of actually having anywhere to wear such clothing).

Well, as always, this exact phenomenon happened again when Holly donned a fabulously festive red dress to present the ITV morning show yesterday. Showing off the dress to her 6.9 million followers on Instagram, she revealed that the dress was from cult British indie label The Vampire’s Wife.

Shortly following Holly’s Instagram post and daily TV appearance, consumer shopping app LIKEtoKNOW.it saw a 2,700 per cent increase in searches for red dresses as consumers looked to recreate the look, no doubt for the upcoming festivities.

But not just that, Holly revealed she had rented the midi dress from Hurr, an online fashion rental platform, proving that sustainable fashion can be glamorous.

Holly Willoughby’s red dress is The Falconetti dress, which costs £1,595 to buy new, but on Hurr you can rent it for the much more affordable price of £134-364. Seeing as we live in a culture where we so often wear dresses only once, it’s no surprise that fashion rental services are on the rise, helping our purse strings as much as the environment.

In fact, Hurr proves just how good renting dresses is for the environment: their website states that, by renting the dress instead of buying it new and wearing it once, you are saving the equivalent CO2e of 26 trees or 3979 miles in a car.

So seeing as you’re all searching for red dresses just like Holly’s, here are four options from the high street, all under £100. You’re welcome. 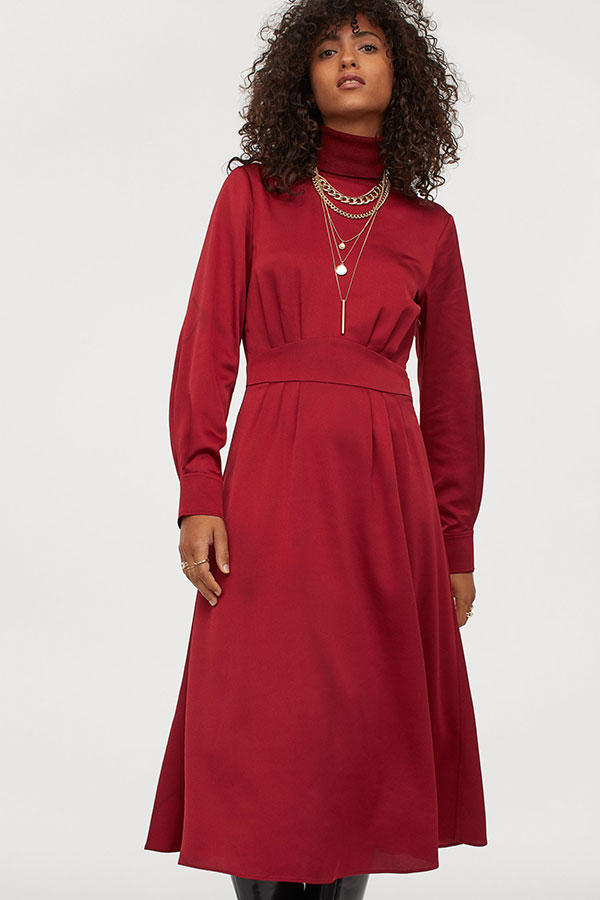 15 of the best Breton tops to see you through spring...

The internet is loving the shoes Emma Thompson wore to collect...

ASOS have released a new range for fuller busts

An insider has revealed the secret to bagging the best Zara...

This simple backpack just racked up a waiting list of 9,000...

Christine Lampard’s Zara jumpsuit is set to be a sellout