As a child, Grace Dent dreaded long boring days at the beach. Now, she says, an expanse of sand is her happy place.

For some time, as a child, I wasn’t entirely sold on the seaside. On the Solway Coast, on any sunny bank holiday weekend in the 1980s, my mother’s Austin Princess would pull up, filled to the brim with children, bats, balls, sweating-egg sandwiches and, perhaps, a cursory bottle of Ambre Solaire Factor2 sun oil. 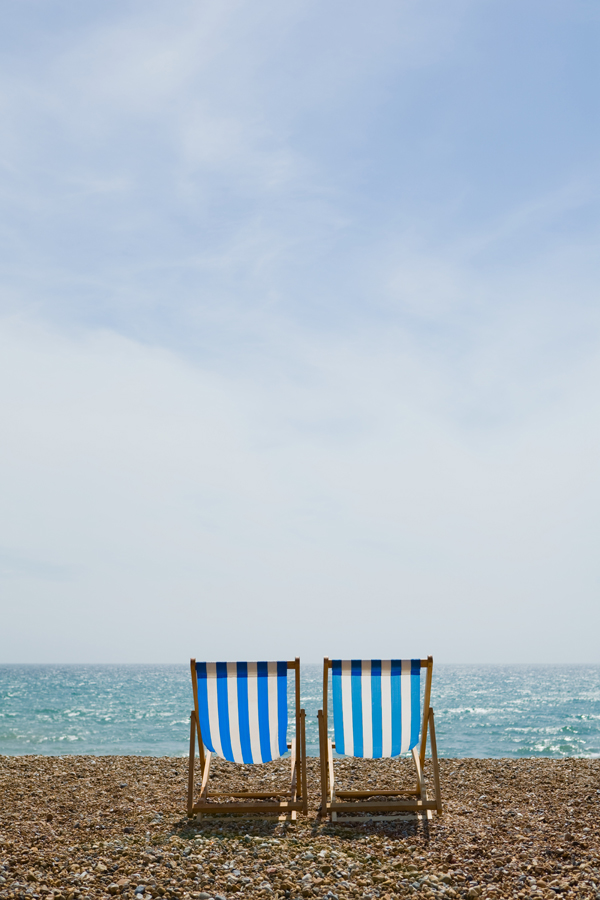 My mother – blonde, fair, easily tanned– adored the sea. One day she would win the football pools, she told us, and we would relocate to a sea-view mansion, perhaps in Florida, perhaps in Fleetwood. She never did, but it was a dream.

I, on the other hand, was less enthusiastic exiting that car with its hot leather seats. Small, pale, anxious, I would stare at the sandy nothingness reaching out to the shimmering blue water between Silloth on Solway and nearby Scotland, never quite feeling the same joy as, say, my little brother David, who would have shot out of the car as it stopped, hooting with glee.

Within 20 minutes, David would have rounded up complete strangers to play beach football, touched a jellyfish, swum up to his chest in the Solway Firth and located an ice-cream van to buy a Lyons Maid Zoom.

I was a far more reticent child. The lack of schedule when we reached the seaside made me edgy. We were there, Mam would say, ‘making the most of the sun’ until it went away again, which to a ten-year-old girl armed with one solitary copy of Blue Jeans magazine seemed a very long time indeed.

Also, even at this precious age, I had figured out that the 30-metre walk from the beach towels into the sea, while wearing a costume that exposed my bare thighs, seemed excruciatingly long. I did not resemble Page 3 girl Samantha Fox.

Years later, on a wonderful, sunny break in Tunisia with my mother – seven days of sandy toes, prosecco and paperbacks – something shifted in my attitude. Beach holidays are for people-watching and me and Mam grew fascinated by a pair of octogenarian sisters who would come through the hotel bar each day. Wearing just swimming costumes they’d gingerly walk, hand in hand, to the sea and paddle up to their waists. It’s then that their dour faces would turn into pure silliness as they shrieked and splashed around.

These ladies gave precisely no stuffs at all about eyes prying at their wobbly, fleshy, wrinkly bits on their walk across the beach. The sea air and the salty water seemed to transform them.

This image has stuck with me. Because, I know now that a trip to the seaside is a powerful tonic. Nowadays, when city life and deadlines are pulling me under, I pine for the desolate, blustery beaches of Aberdeenshire, Carmarthenshire and Suffolk. If you’re lucky, you can have them to yourselves. Just you, your loved ones, some seagulls. Time to laugh, walk and catch up. What could be more perfect, I often sigh, than a long afternoon in Northumberland on a bright day labrador-walking, chip-eating or perhaps a cream tea on a sun-trap hotel terrace? Then, home with toasty shoulders, full of vitamin D plus a renewed sense of perspective.

The beach has been there longer than me and you and everyone we know: no one cares if the council won’t replace your stolen garden refuse bin or your balayage has gone slightly green. We are but specks on the cosmos. Life is short, have a Solero.

Over the years, I’ve become a dab hand at beach life, in all its various forms. I’ve ‘done’ St Tropez in summer, eating lobster in a bikini, downwind of Joan Collins at Club 55. I can’t say I enjoyed this much more than scampi in a basket in Lytham St Annes, because going places strictly to be seen there is exhausting.

I’ve holidayed numerous times in Ibiza, dancing barefoot in beach bars at sunset, but, like most holidays spent in your early 20s, I have very few memories and the most glamorous meals we ate were Ruffles washed down with Fanta Lemon.

In Rhodes I once kissed a fireman who was actually from Catford, but let’s ignore that. We stayed out all night snogging on sand dunes and he fireman’s lifted me back to my shared girly holiday apartment. This was one of the most romantic things that has ever happened to me, even if when I developed the photos at Boots a fortnight later, it turned out he resembled a smaller, squashed Phil Mitchell. Ouzo is a hell of a drink.

I’ve beach-holidayed in Miami, Eilat and Bulgaria but nothing is as dear to me as the final trips me, my mother and our family took to Cornwall, just before the pandemic. On her last legs with cancer, but still fighting, we bundled Mam into a people carrier, filled with teens blaring TikTok from phones, farting dogs, Swingball and bulging suitcases. The drive was long from the North but we got there, to a beach house with glorious, unspoilt views and a cliffside path down to a little bay with a bar that sold cones of chips and doughnuts. The beach was mainly algae, rocks and grey sand, but the dogs loved it, so we were happy. I will always remember linking her arm as we took one of our afternoon perambulations, laughing and gossiping, the wind blowing us sideways and making us sand-blind. ‘I’d love to buy a house here,’ she said, as she always did, although this time, it felt much more poignant.

Since she has gone, I find myself combing the pages of Rightmove, in search of a perfect fantasy seaside house– for me and for her, if I’m honest. I look for a beach place in which to spend long summer days with our family. It’s just a dream, but the dream is compelling. A place where we can throw the patio doors open and wander down as a gang, laughing, splashing and carrying windbreakers and sweating-egg sandwiches. A place to make the teens in the family irate there’s no 4G or shops, but they’ll make memories that live for ever. I’ve not found it yet, nor could I probably afford it, but the search for Mam’s house feels like sunshine.

Grace presents Best of Britain By The Sea. Watch it on More4 at 9pm on Mondays or for the complete series go to All 4.