This weekend, Geri Horner – née Halliwell – celebrated Max Verstappen’s win in the dramatic finale of Formula 1’s season in Abu Dhabi. Married to the Principal of the Red Bull Racing Formula One team, Christian Horner, she was interviewed by Sky Sports on Sunday wearing a WASP-ish ivory cardigan over a white roll-neck paired with pearls.

The former Spice Girl’s style evolution has seen the singer adopt an all-white wardrobe in recent years, despite spending her days running two country homes, parenting, looking after animals and supporting Christian’s team on the race track, and Sunday was no exception. As a busy mother, author, brand ambassador and philanthropist, Geri made the smart decision to simplify her wardrobe by reducing it down to various shades of ivory, cream and white, mixing and matching elegant pieces and honing her very own consistent, classy style.

But she’s not forgotten her roots, and subtle nods to her time as British pop princess Ginger Spice illustrate a playful approach to getting dressed. She might have moved on from the iconic Union Jack minidress she wore to the BRITs in 1997, which she recently revealed was in fact a ‘£5 tea towel on a Gucci dress’, but these days she’s often spotted wearing an ivory wool bomber jacket with navy and red striped detailing by – you guessed it – Gucci.

Other favourites include a Goat tunic dress with scallop detailing, flared sleeves and a boat neck; a Madeleine Thompson cashmere knit; and a Chanel wool dress inspired by the fashion house’s iconic tweed suits.

While all-white might sound all-wrong for her lifestyle surrounded by grease monkeys, kids, farm animals and cars, there’s something fabulous about her preppy, pristine, yet totally impractical wardrobe: while she has been spotted wearing a waxed jacket and wellies occasionally, more often than not she opts for a bright white puffa jacket and chunky white platform boots (sometimes to the chagrin of her dry-cleaner, no doubt).

Between her tailored white two-pieces and elegant monochrome ensembles, Geri’s go-to pieces are timeless, with traditionally feminine silhouettes and vintage-inspired designs fit for her role as the first lady of motoring. 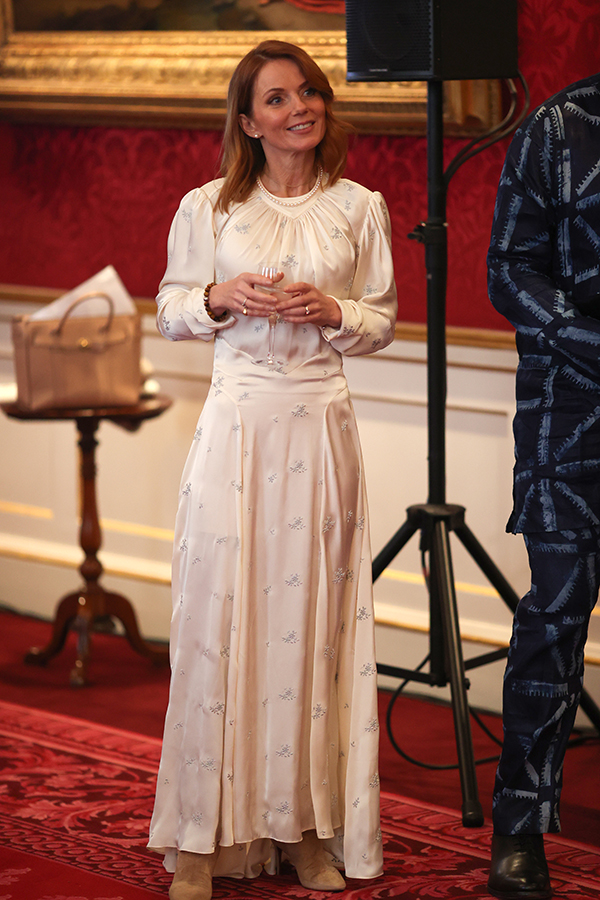 When it comes to dresses, she gracefully sidesteps any bridal connotations with asymmetrical designs, midi-length skirts, short sleeves and unusual necklines. Paired with nude heels, simple jewellery and her signature red hair, she’s come a long way from her punky Nineties performance-wear: now, her authority as a style icon comes from a tried-and-tested uniform that has attitude in its its authenticity. That’s what we call girl power.

I do not care about incredibly rich men driving cars so formula 1 does nothing for me. BUT I am *always* here for how Geri Halliwell became lady of the manor and now is deep in the welly and Barbour aesthetic.

ASOS are winning praise for showing their clothing on models of...

Lorraine Kelly’s £29.99 Zara skirt will see you through summer and...