Challenging times call for… comfort food! And finding a lovingly handwritten book of recipes from the 1960s couldn’t have been more welcome for Georgie Williams.

I love anything secondhand – clothes, furniture, crockery. It just sparks my curiosity. Who owned this before me? Where are they now? There’s beauty in the uniqueness – you know it has a story behind it. I’m always rummaging in charity shops and flea markets. Two years ago I was in an antiques shop in London’s Crystal Palace – a real Aladdin’s cave, with piles of books and chessboards I had to clamber over. Right at the back I spotted a beautiful 1960s wooden cabinet with sliding glass panels: the perfect TV stand for my living room.

When I got it to my flat in East London, I found a leatherbound book tucked inside. I assumed the shop had left it in there by mistake. On the cover it said ‘Official Diary 1968’ and in the top right-hand corner someone had written ‘RECIPES’. 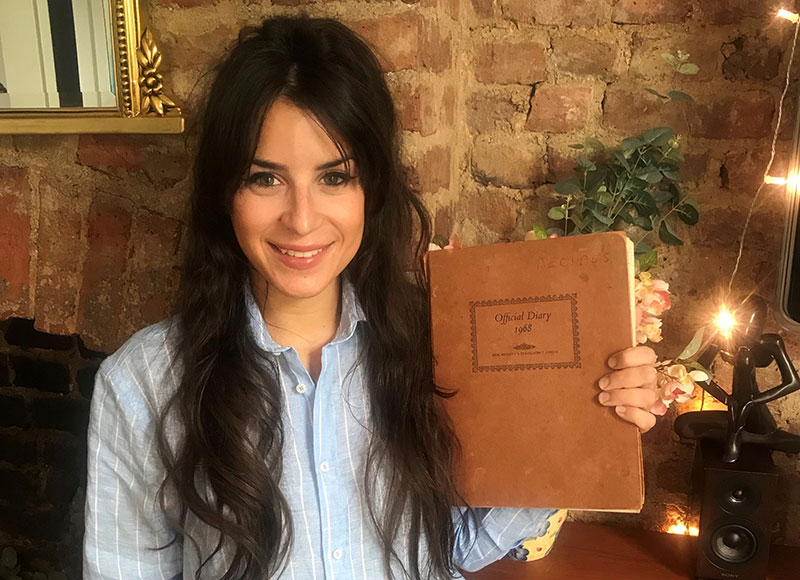 Inside was a year’s worth of handwritten recipes, one for every day of 1968. Stuffed eggs, 15 February… Quiche lorraine, 20 March… Cold salmon mousse, 6 April… I went through every sauce-splattered page, careful not to damage the already cracked spine. It was full of retro classics: cheesy dates wrapped in pastry, melba toast, waldorf salad. I was intrigued: I assumed because it was written in 1968 – a time when women still did most of the cooking – that it was most likely to have been created by a woman, not least because I found the book also contained a magazine clipping on ‘cooking for new brides’. Was she still alive? Could I find her? I tucked it on a shelf to keep it safe.

It sat there until last May, when I wanted a new project to get stuck into and thought, ‘Why not start working my way through it?’ Food has always been a comfort to me. I grew up with five siblings and the dinner table was the centre of our family life. As soon as our mum served dinner, you had to dig in or there wouldn’t be anything left.

I’m not a brilliant cook by any means, but I do enjoy being in the kitchen. I challenged myself to cook each recipe in chronological order, every week or so as my job at a creative agency is very busy. I set up an Instagram account, @forgottendelights, calling myself Sherlock Scones, thinking other people might be interested in the project – even if it was just my mum – and hoping that someone, somewhere, might know the original author.

The first recipe, dated 1 January 1968, was a paradise cake: a sweet shortcrust pastry shell filled with an almondy cherry sponge. It was a good one to start with, easy and tasty, and reminded me of the bakewell tarts my grandma used to bake. The recipe for 2 January was flaky almond biscuits with a hint of cinnamon – delicious. But the recipe for 3 January threw me. Fruit cocktail americaine: melon, grapefruit and orange, with tomato, grated onion – and gherkins! The sauce was a dollop of yogurt. I can’t say I enjoyed eating that one. The cheese meringue pie for 18 January also sounded dodgy but actually tasted quite good.

I soon realised 60s food is much heavier than the meals we’re used to now. There are lots of sauces thickened with cornflour. The plaice fillets served with a cream sauce (27 January) were far too rich for me. There were lots of things in jelly, too. The melon delight involved halving and hollowing out a melon to make two ‘bowls’ and then setting a fruit salad inside with lemon jelly. It’s topped with glacé cherries, of course. You can’t get more retro than that. There’s an aspic – a savoury jelly made with meat stock – coming up later in the book as well. I like all the little kitsch touches: frosted grapes dipped in egg white and sugar, and ‘butterflies’ made from tomato tops.

The recipes aren’t too technical, but the trickiest part is there aren’t the glossy pictures you have in modern cookbooks. I don’t know how things are meant to look, so I’m just guessing and using my imagination.

I haven’t found many clues as to who the original owner is. But I’m pretty sure she must have been at cookery school. There’s a note on one page that says, ‘New course with Mrs Warrelow’. And who makes a bûche de noël (yule log) on 24 January? On some of the pages, she’s jotted down a phone number or name. Whenever I find something, I add it to my spreadsheet of clues; I feel a bit like a detective.

I imagine her serving up her dishes to a new husband, while I share them with my flatmate. Our lives are probably very different: by my age – I’m 30 – she may have had a family to feed. But I can tell she and I share the same passion for cooking. There is a love of food in the pages.

With each recipe, I like to research what was happening on that day in 1968. What films were in the cinema? Who was number one in the charts? I’ve created a Spotify playlist with all the songs from the era that I listen to as I’m cooking: The Beatles’ ‘Hello Goodbye’, The Beach Boys’ ‘Good Vibrations’, The Ronettes’ ‘Be My Baby’.

It’s taken me more than a year to get through a month of recipes. My Instagram following has become a lovely online community. If I can’t decipher the handwriting, I pop it on Instagram and my followers help me figure it out. There was an ingredient – angelica – that I needed to decorate some Viennese biscuits, and I didn’t know what it was. One of my followers explained it’s the candied stem of a plant called Angelica archangelica. It’s hardly ever used in recipes now, but they’d tracked down an online stockist.

When we went into lockdown, the project became even more important to me: it’s been so nice to have that connection to others. I’ve gained a lot more followers since then – people say it’s exactly what they need to take their mind off the pandemic. I really believe that cooking can turn around a difficult day.

I’m still hopeful I can find the owner and reunite her with her book. All I need is one person to see it and recognise it. I like to think if we ever met she’d be impressed with my cooking!

After hearing about Forgotten Delights on the radio, a woman called in to say she’d discovered a similar recipe book from 1969. It belonged to her late mother, and she’s started cooking the recipes to feel closer to her. I hope it encourages more people to dig out old family recipe books and enjoy that connection to the past. Forgotten Delights has brought me so much joy. If I can inspire someone to do something similar, that would be amazing.

Melon with gherkins, anyone?

This recipe from the book has some… er, interesting flavour combinations.

8 surprising foods that count towards your 10 a day