The number of women seeking help for gambling addiction has risen by a shocking 76 per cent in the past year. And new research suggests that for women – unlike men – it’s a method of coping with emotional trauma. Sally Williams investigates.

One evening in 2018, Jessica went for a night out at the dog races. Luck was on her side and she won £5,000 from a £1 bet. But what should have been a dream come true for the cash-strapped mental health nurse– who could now pay off her car loan– was the start of a slide into a gambling addiction. 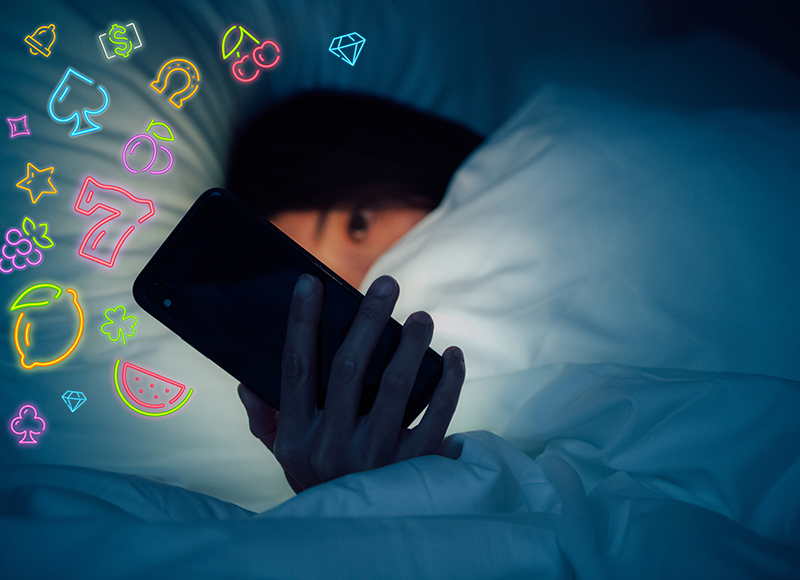 Mary, 46, works in PR and lives in Devon, near her cousin, Naomi, 42, a part-time administrator. About four years ago, Mary noticed a change in her cousin. Whenever she dropped in, Naomi would be in her bedroom and her two children – then eight and 11 – would be fending for themselves downstairs.

Initially, Mary just assumed her cousin was feeling low. She was dealing with the aftermath of a messy divorce – Naomi had discovered her husband was having an affair – as well as grieving for her recently deceased brother. But then she started asking Mary for money. ‘Just small amounts at first, £10 or £20 once a fortnight,’ remembers Mary. ‘It wasn’t a big deal. Then larger sums, like £100.’ Shortly afterwards, Mary confronted her cousin. ‘She admitted she was gambling at night on her phone. Mostly slot machines, but sometimes horses. Over a few months it all came out: she had 11 bank cards and several payday loans and had built up a debt of £70,000 over 18 months. She was depressed and using gambling as an escape.’

Professor Henrietta Bowden-Jones, a consultant psychiatrist and founder and director of the National Problem Gambling Clinic in London, believes that problematic gambling (gambling in a way that is disruptive or damaging both to the gambler and those around them) in women often seems to be linked to trauma. In an in-depth audit of 80 women aged 25-55 referred to her clinic since 2016, Professor Bowden-Jones noticed a significant proportion had experienced a traumatic life event such as an abusive marriage or sudden loss. Of the group studied, most played online casino games (such as roulette, slots, bingo, cards) and some had debts of more than £100,000.

‘A lot of the young men I see have inherited a vulnerability to pathological gambling – they gamble compulsively without having had any trauma. In the women, I don’t see that genetic disposition. You normally hear a very complex story. Attachment, separation issues, mental health issues and trauma are all part of it.’

Bowden-Jones stresses that not enough research has been done to make any firm conclusions on gender-based triggers for problematic gambling. But, based on her observations, female gamblers tend to experience an additional layer of distress from the stigma that comes from being a woman with a gambling problem. ‘I’m not saying there isn’t any shame in men, but there is an enormous amount in women.’

Three years before her lucky night at the dog track Jessica, then 21, began dating Adam –a guy with a murky past. But two years later, he violently attacked her. Jessica believes this event marked the start of her gambling problems. She left Adam but became very withdrawn. ‘I didn’t want to talk to anyone. People would ask, “Are you OK?” but I wanted them to leave me alone.’

She was prescribed Valium, which she hoped would ‘shut off’ her brain, but by 2019 things really started to fall apart. Jessica had found a new route to oblivion: an online slot game where players paid £1 for a spin and a chance to win up to £80. She was using all her monthly salary of £1,200 to gamble and had signed up for three credit cards. She also spent £4,000 of her student loan that was supposed to fund a psychology degree. She did win money– at least £2,000 every other month – but lost more. Gambling had become her entire focus; she’d even gamble on the loo. ‘It was a way of shutting off,’ Jessica explains. ‘I never thought about anything else while I was doing it.’

Assessing the number of women who have gambling problems is difficult. The Health Survey for England 2018 suggested that nearly 86,000 women in England could be classed as problematic gamblers. But in December 2020 the Gordon Moody charity, which helps those most severely affected by gambling, showed a 76 per cent year-on-year rise in the number of women seeking help through their services. This accounted for more than 90,000 women across the UK – the highest figure ever recorded.

Dr Heather Wardle, a social scientist at the University of Glasgow and an expert in women and gambling, believes another issue is that we are assessing addiction using tools aimed at men. One of the key instruments is the Problem Gambling Severity Index, a self-assessment tool with nine questions developed in 2001. Wardle believes it fails to capture women’s experiences. It asks questions such as, Have you ever bet more than you can afford to lose? ‘But,’ says Wardle, ‘it doesn’t cover relationship difficulties and breakdowns or consider that women might experience greater stress and anxiety because of the stigma from being a woman who gambles.’

What is becoming clear is that action is needed. Earlier this year, a cross-party group of MPs examining gambling harm held a forum focused on women. ‘That was massive,’ says Wardle. ‘It’s very hard for a woman to talk about her difficulties when it’s still seen as a male activity.’

Nadine Ashworth, a former gambler who works for charity Gamfam, agrees. ‘They’ve entered a man’s world and look what’s happened,’ is how she puts it. ‘Shame can stop women from getting help.’

Jessica finally left a message for charity GamCare but when they called back, at first she couldn’t answer. ‘A counsellor kept ringing but I just ignored it. I was embarrassed. I was a mental health worker. I should have been fine.’ Eventually Jessica agreed to speak to the counsellor, who drew up a timeline of significant events and made Jessica think about how she reacted to certain scenarios. ‘She gave me tools – for example, drawing up a budget and getting rid of my phone. That was hard, I had to tell everyone that I’d lost it. Mostly, she made me feel I wasn’t a bad person, I was just stuck.’

Jessica hasn’t gambled since March 2020 but still owes £3,000. ‘The gambling sites should do more. If you’re going through any kind of trauma, you are likely to be on your own. Who is going to tell you to stop?’

Mary supported her cousin Naomi in getting help and contacted the debt charity Step Change. ‘She must have been so lonely and scared about losing the house, about her ex-husband getting custody of the children,’ says Mary. ‘Step Change were brilliant. They organised a repayment plan and told us to negotiate the debt with the companies.’

Naomi last gambled three years ago. With financial help from her family, she now has £30,000 left to repay and possesses just one debit card. ‘It’s important that relatives are not judgmental, even though you might feel alarmed at the amount of money lost,’ says Mary. ‘The gambler is in so much pain already. The important thing is to get them help.’

PREOCCUPATION Often thinking about or planning to gamble can be one of the early warning signs that it could be harmful.

WITHDRAWAL Removing yourself from social and professional situations so that you can place a bet is another warning that your gambling might be going too far and that the urge to gamble is potentially harming other areas of your life.

ESCAPE Life can be overwhelming at times and you might feel like you want to escape it for a while. Using gambling as a coping mechanism is a sign of harmful gambling and can lead to losing significant amounts of money.

CHASING LOSSES The main motive of gambling is to win money. During a gambling session, that motive can change to chasing losses – where your aim goes from winning money to winning back the money you have already lost. This can be dangerous and lead to further, significant losses.

LYING If you find yourself hiding how much you are spending, lying about the amount of time you are devoting to gambling or asking for money to cover bills, it could be a sign that gambling is harming your life and possibly risking your relationships with family and friends.

Anyone concerned about their own ora loved one’s gambling can contact the National Gambling Helpline for free on 0808 8020 133. Gamcare.org.uk runs a women’s online group chatroom on Saturdays from 6.30pm-7.30pm

SOME NAMES HAVE BEEN   CHANGED. GETTY   IMAGES. ADDITIONAL INFORMATION PROVIDED BY THE CHARITY GAMCARE, WHICH SUPPORTS ANYONE HARMED BY GAMBLING