Becky Richardson, Ami Bennett and Frankie Wells are breaking the mould in the male-dominated radio industry with the launch of Foundation FM, the first female-led radio station to hit the air waves. 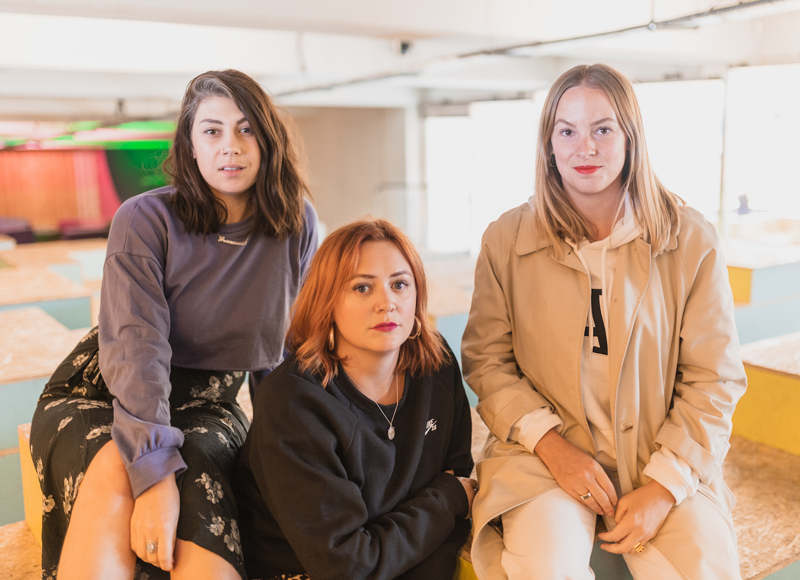 Launching worldwide on 5 November, the new music platform aims to celebrate, nurture and champion young creatives, with women at the forefront of every step. ‘Everything has always been run by men,’ says Bennett, a former BBC Radio 1 and 1Xtra producer. Her partners come with an equally impressive CV: Richardson has built a reputable career as a national radio plugger and Wells was a producer at former community station, Radar Radio.

The three trailblazers met professionally a few years back but sixth months ago, they decided to join forces after noticing a gap in the market for a female-led music platform. ‘With Foundation FM, we’re trying to combat the old school ideologies within the music industry that we’ve all experienced throughout our own careers,’ explains Richardson. ‘It’s always a bit harder for women, it always takes a bit longer for us. Often, we’re not taken seriously. With our radio station we want to make sure that this is never the case from the grassroots up.’

The past year has seen the radio industry come under much-need scrutiny, following the growth of global female-focused initiatives like Me Too and Time’s Up. Presenter Tina Daheley recently spoke publicly about the ‘laddy’ culture she experienced at BBC’s Radio 1 Breakfast, while Capital FM’s Vick Hope has called out sexism in her field of work.

Most controversial of all was the abrupt closure of Radar Radio in April, after the station faced accusations of sexual harassment, homophobia and appropriation. Wells, who was employed there at the time, explains how the events birthed the concept for Foundation FM. ‘I think a lot of people need this,’ she says. ‘When [Radar Radio] closed a lot of people lost faith and many lost their opportunities too. I saw amazing women being pushed out of places and that inspired me to want to change that and say this is not OK.’

While Foundation FM is female-led, it isn’t female only. Instead, it’s a ‘safe space’  for up-and-comers regardless of their gender, race or sexual occupation. ‘This isn’t an anti boys’ club.’ says Bennett. ‘It’s not about saying this isn’t for you, it’s about saying this is for everyone.’

The trio have already secured a solid roster of DJs and presenters, both male and female including artist Lotte Andersen, Kesang and the women behind The Receipts Podcast. Their daily Brunch show, led by producer Kamilla, will replace the traditional concept of a  breakfast show, starting at the later time of 10am to cater to those in creative industries who don’t work a standard 9-5. The Peckham-based station will run online Monday-Friday, allowing listeners to tune in until 10pm. ‘The schedule for the station was filled up very quickly,’ says Richardson, reflecting on the planning process. ‘Then it was just about getting the funding and luckily every investor conversation we had while putting it all together was positive.’

Ultimately, Foundation FM is opening up a seat at the table for all talents. For once, women in the creative industries won’t have to shout louder. ‘Everybody can talk at the same volume and everybody will get heard,’ says Bennett. ‘It’s a safe space for all.’