Journalist Flora Gill was investigating the growing trend of ‘catfishing’ – where couples hoodwink unsuspecting singles to rev up their relationships. Prepare to be surprised by what she discovered.

My friend Leah called me in a panic. She had been on a dating app, swiping through the faces, when a familiar one appeared. It was our friend Olive’s boyfriend Ned (although his name had been changed to the fancier-sounding ‘Nicolai’). Ned and Olive have been together for three years and we’d always thought he was a kind, sweet man – but here he was looking for hook-ups behind her back.

We made the decision to call Olive. It was going to be an uncomfortable conversation, especially as at the time, due to lockdown, Ned would be at Olive’s house. We broke the news as delicately as we could. ‘You’ve met Nicolai,’ she replied joyously. ‘That’s so funny!’

Turns out she and Ned had cooked up the fake dating profile together. Bored on lockdown evenings, they’d cuddle up on the sofa swiping through girls and sending chat-up lines as the enticing Nicolai. ‘But why?’ I asked. ‘It’s fun,’ Olive replied. ‘We get to have flirty banter with strangers plus I enjoy seeing all the girls who want my boyfriend.’ 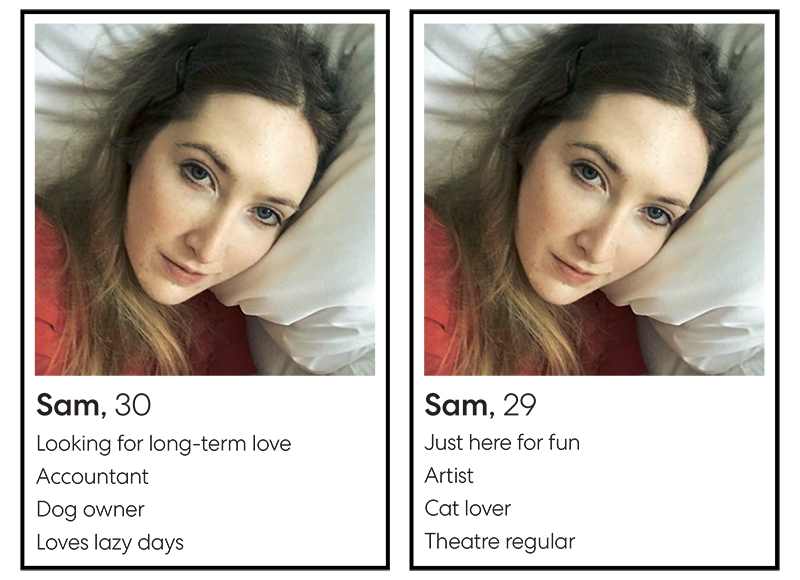 There have always been questions about how genuine people are on dating apps. There are those who embellish their profiles in the same way you might do a CV. But there are also people, known as ‘catfish’, who create entirely fictitious accounts using other people’s images as their own. The exact percentage of fake profiles isn’t available as, unsurprisingly, those doing it aren’t exactly forthcoming. But last year a survey by the trade association UK Finance warned that 33 per cent of men and 20 per cent of women had reported being catfished – with 26 per cent of men and 15 per cent of women being asked for money.

Catfishing couples, however, seem to be searching for sexual thrills rather than financial gain. John – half of one couple who agreed to talk to me about their catfishing – sees it as a form of foreplay. He and his girlfriend created fake profiles and enjoyed seeing who got more interest from strangers. ‘We’d go on the dating app in bed together,’ he tells me. ‘We’d make each other jealous and it would end in amazing sex. Once we even used the names [in sexual role play] of the people we’d seen [on the app].’

Dating apps saw a surge in activity over lockdown. Tinder recorded its highest number of swipes on a single day – three billion worldwide – just as lockdown began in March 2020. It also saw 12 per cent more messages being sent in the UK between mid-February and the end of March.

As a millennial, dating apps have been an integral part of the dating scene for my generation, entirely changing the romantic landscape. When I was 18 it was considered odd to meet a partner online. Now it is odd to have not been on a dating site.

There’s sometimes an assumption from older generations that dating apps are only used for casual hook-ups by a certain type of person, but research by dating platform eHarmony and the Imperial College Business School estimates that by 2035 more than 50 per cent of relationships in the UK will have begun online and that by 2037 the majority of babies will be born to parents who met online. I, however, met my boyfriend when I was 20. We went on our first date at the beginning of 2011 – Tinder wasn’t launched until September 2012. We’ve been together ever since, so I missed something that has become defining to the culture of my age.

This is why I decided to follow in my friend’s footsteps and go couples’ catfishing. At first, I didn’t want to use our real faces or names so I used another app called Facetune to morph a photo of me into a male version. We called him Chris and started swiping through the profiles of women who responded.

I don’t know if it’s a good or a bad thing but it turns out I am not a desirable man – Chris got very few matches. So we went a step further and made profiles with our own photos but fake names.

Creating our faux selves was thrilling at first. We scrolled through our photos, pulling out the best pictures of each other and writing our bios together, embellishing each other’s positive features. It was exactly like role play. I was single girl Sam, a year younger than I really am, who liked cats. I put together my boyfriend’s page, carefully cropping my face out of our photos. I felt rather proud of his profile. ‘I’d date you!’ I said. ‘I should hope so,’ he replied.

We started swiping and getting responses, offering up some truly awful chat-up lines in the process. But it didn’t take long for my feelings of excitement to start morphing into something uncomfortable. I didn’t experience John’s thrill of the competition nor Olive’s joy of watching other people thirst after your partner. Instead I felt nervous. Perhaps it’s because I’ve always felt paralysingly uncomfortable lying, or maybe that’s too generous and, really, I just hated my boyfriend being lusted over by strangers.

Gurpreet Singh, a counsellor at Relate, believes couples who catfish together are indulging in an unkind form of power play. He is concerned by the potential psychological impact on the victim of the deception. ‘Every relationship counsellor these days has worked with someone who’s struggled with dating websites. Now imagine how damaging it could be for someone to find out they were being played.’ He adds that there are issues of consent as well. If a couple wants to indulge in consensual sexual activity online, then there are swingers’ sites and threesome apps that will allow them to do this.

Before writing this, I sent a message confessing to what I had done to all the men and women I’d matched with on the dating site. I told them I had a boyfriend and asked them what they thought of couples pretending to be single. About half of them deleted me immediately, a few said it didn’t bother them but some, quite rightly, were very upset. ‘I feel betrayed and humiliated,’ one told me. ‘It’s like I’ve been toyed with. And doing that during lockdown, when people are already struggling socially, is cruel.’

Thinking about it, couples pretending to be a single person is a bit like someone pretending to be a doctor. It’s fine to role play on your own, but when you start involving other unaware people you risk someone getting seriously hurt.

The new language of love

Charlotte Vossen lists the other additions to the dating dictionary.

Looking to the stars to find love, singles add their zodiac signs to their dating profiles to search for matches with astrological compatibility.

Those who are newly single after breaking up with a long-term partner during the pandemic and may not have experienced online dating before.

Due to lockdowns and Covid-related travel concerns, people are reducing the radius for matches on their dating profiles to as little as one mile.

To speed up the dating process, singles are being more upfront about who they are and what they want from a relationship.