Once one of TV and radio’s hottest names, stardom took a heavy toll on FEARNE COTTON’S mental health. Now a leading wellness champion, she tells Kate Spicer why walking away was easy. PHOTOGRAPHS: MATTHEW EADES

After 20 years as a successful TV presenter and broadcaster, Fearne Cotton couldn’t hide her battle with depression and bulimia any longer. ‘I remember the BBC London DJ Jo Good saying to me, “Oh, I look at you and think, ‘She’s got the world at her feet with the paparazzi all around her’.” I had to say, “Do you think ten men following me with cameras is a good thing?” It was horrendous. I didn’t talk to anyone about how I felt. I just smiled. People would say, “It’s helping raise your profile”, but as an introverted person it was a nightmare and on the days when the depression was severe, I’d just detach from my life and float off. I felt so tired.’

At the same time, the wider media saw her as fair game and were exceptionally cruel. ‘I thought I was doing a good job but they were vicious.’ In what way? ‘On a Guinness World Records Smashed show with Ben Shephard we did a bungee jump and one TV critic said he wished the bungee rope had snapped.’

In the end it was Cotton who snapped. She walked away from one of the biggest jobs in broadcasting and in 2015 all but shut down her TV and radio career. Today her only regular TV gig is partnering with pal Gok Wan on Celebrity Gogglebox. Which is not to say her career is over. In fact, she has had that rarest of things in showbiz – a second act.

Six years on, Cotton has 11.5 million social media followers and is bang on the zeitgeist with her Happy Place wellness brand, which has spawned four days of upcoming festivals in London and Cheshire. A Happy Place app is on the way. There’s a 180-episode-strong Happy Place podcast with guests including Stephen Fry, Hillary Clinton and the big names of wellness, such as Brené Brown and Wim Hof. There are eight self-authored books, plus a publishing imprint. As well as the Happy Place work in the public eye, she partners with companies developing better mental health strategies. She has 15 women working ‘with’ her (not ‘for’ her, she is keen to point out). As second acts go, it’s not bad.

‘So many of my friends have suffered [with their mental health]. One lost her brother and was at zero with no support. I hope Happy Place can help people cope a little better in hard times.’

We talk for well over an hour, almost entirely about mental health: her grandmother’s, husband’s, mother’s, cousins’, the nation’s, and, of course, her own. She doesn’t hold back. The decade of bulimia, the long, debilitating depression followed by crippling anxiety and panic attacks. Yet, as we talk, I keep forgetting this sunny, apparently confident, articulate woman sitting beside me has any issues at all. She’s had a lot of practice at hiding in plain sight.

Cotton, now 40, became famous at just 15 and she talks about this early success like a slow car crash through the lens of her eventual depression. Her friend Russell Brand describes celebrity as a sort of trauma, and I’ve heard other famous people say the same thing. ‘It is,’ she says, ‘but you can’t moan about it, that’s not allowed. For me, fame was a source of trauma long before I became famous. I come from a working-class family. I went to an average state school [Haydon in Pinner, North London], Mum worked four jobs, Dad was a signwriter. So I thought everyone on TV was it. I wanted to do that. I wanted to be in pop culture. I was this kid in bunches, pushing the school uniform rules with my shirt hoiked up so I could look like Denise Van Outen on The Big Breakfast. I’d be sitting in my English class looking out of the window daydreaming. School felt so grey.’

At the age of 12, she started at a dance and drama school. ‘I lived for it and went every hour I could – I was totally focused. I was an excitable, happy, hyper kid.’

She auditioned for a number of TV presenting jobs, finally landing a role on The Disney Club. At first things were great: ‘Young TV presenters are well cared for. I had this amazing producer called Maddy who was like a second parent – I was really nurtured. 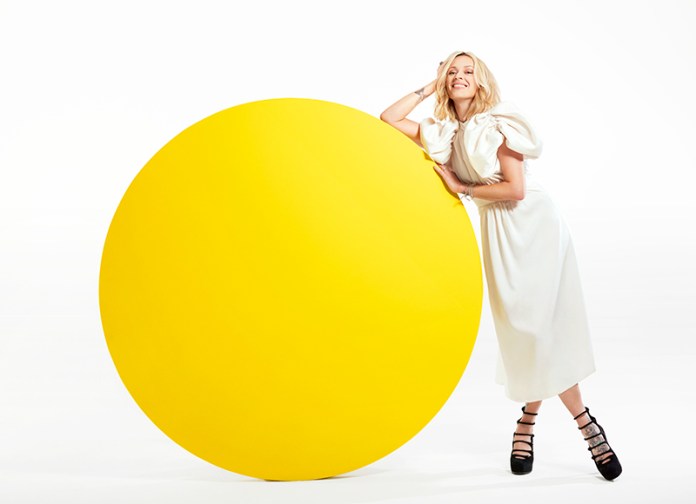 ‘But when you turn 18 it all changes. It was terrifying. My chaperones were gone and I was on my own. As a kid I was just having fun with work, but as an adult, suddenly it was people saying: “You’d better do this lads’ mag so that people see you as a woman.” I’d always been good at my work: I turned up early, I knew my lines, I never messed up. But it was still not enough. This sexy thing, it made me feel out of control. My default was to think I am getting it wrong. I felt a phony – I am not a sexy girl, and I was standing there in this Arena magazine shoot, head to toe in PVC. I just kept thinking: “This is not me.” I still felt like a child. I was very innocent.

‘I think this was the start of things chipping away at me. It kept my self-esteem low, and the TV industry really thrives on that fear that there’s someone better waiting for your job in the wings.

‘By 19 I was bulimic, I think because I was working with loads of really thin pop stars like this,’ she holds up her little finger. ‘Bulimia was my secret and no one could have any sway on it.’ She didn’t binge, just purged constantly. ‘It was all day, every day, whatever I ate for three years. My mum confronted me when she came over to my place after I’d been with her on Christmas Day. She knew, but I lied and said I was fine. I feel so awful for Mum now that I’m a parent.’ The condition was so bad that all these years later she admits: ‘I’ve still got gum damage from it.’ With bulimia, teeth and gums are repeatedly exposed to stomach acid, which will likely give rise to a number of dental issues, including gum disease.

The battles with bulimia and depression ultimately made Cotton feel she had no other option but to quit her jobs at the BBC. She says that decision was triggered by a specific event. It’s something she has alluded to before but has never said exactly what it was. I invite her to tell me but she again refuses. However, for the first time, she explains why: ‘Even going near the subject now, years later, I feel myself starting to feel s**t. Until I’m at a place where I’ve made peace with what happened, even talking about it would be detrimental to my own wellbeing. Maybe one day I will feel absolutely nothing, and I know I do want to speak about it, because it will be helpful. I didn’t talk about bulimia for 15 years because I felt so much shame. I almost scrubbed it from my memory, but now I don’t feel traumatised talking about it. At the moment it’s still something I am going through in therapy.’

Cotton has not relapsed in her bulimia since she was 29. ‘You can absolutely heal and escape that cycle. The body dysmorphia is still there: I’ve always looked in the mirror and felt I was weird looking.’ She is pretty and fine boned, and incredibly likable, so it’s odd to hear her talk about herself this way. When I ask her about this and the juxtaposition with her long struggles with mental illness, she says: ‘Honestly, I think it’s far less about me presenting some professional front and more about my lack of confidence about how I am received by other people. I’ve been in the public eye since I was 15 – sometimes I wonder what a normal reaction should be.’

The Happy Place Festival, which takes place in August and September, features, among the workshops and sessions, a talk on ancestral trauma, which is the idea that we inherit our predecessors’ pain. When I mention this to her she readily admits it may have contributed to her own struggles: ‘All the women in my family have been impacted. We loved our Nan but she had a horrendous wartime experience – as a child she was evacuated to the country and the people beat her, her sister died of TB, she had my mum at 18, and wasn’t capable of parenting. She had regular nervous breakdowns. As a result Mum had no safe grounding of a maternal figure, and my grandad [her father] also suffered anxiety around safety – their bungalow had five bolts on the door. They had lived through unprecedented bad times.’

People start to hover and it is clear our interview is coming to an end. I mither a bit, so she stays to tell me about meeting her husband Jesse Wood. It was in Ibiza in 2011. They talked till eight in the morning and she was desperate to go to the loo but kept putting it off in case she came back and he’d gone. She tells me how Jesse has his own trauma – growing up with little contact with his endlessly touring father Ronnie, guitarist in the Rolling Stones, and losing his mum Krissy to an accidental overdose of depression medication in 2005. Jesse self-medicated to cope, which Cotton admits she ignored in the early stages of their relationship, but says that when she got pregnant: ‘Overnight he gave up alcohol, drugs, cigarettes. He was remarkable. He just stopped. He knew it was time, there was too much to lose.’ She also tells me her father-in-law Ronnie is ‘the most hilarious character I ever met’. In the early days with Jesse (who lived with his dad in Shepherd’s Bush) she’d find him singing opera on the landing outside their bedroom at 3am, completely sober.

As we’re finishing up I realise that, in some strange way, depression made Cotton. It forced her to shut down her life and then come back stronger. When I put this to her, she gives an emphatic ‘no’.

Then adds, ‘But it certainly took me away from a meaningless job that was just about how do I climb the ladder to be like Ant and Dec. I thought, “F*** that, I’m going to create my own thing where I am my own boss and I will listen to the audience and move with them.” That was Happy Place. I don’t have to wait for the phone to ring to tell me whether I am worthy or not any more. I’m still a work in progress. But as soon as I did that, the anxiety I had for years went away.’

The Happy Place Festival is at Chiswick House & Gardens, London, 6 and 7 August and Tatton Park, Cheshire, 3 and 4 September. For tickets, visit happyplaceofficial.co.uk/events. The Happy Place podcast is available via acast