If you’re a millennial, zillennial or even Gen Z, chances are you’ve heard or read something by Dolly Alderton. She had a regular dating column in The Sunday Times Style, in which she now writes an agony aunt-esque column called ‘Dear Dolly’, co-hosted popular podcast The High Low and is the author of The Sunday Times bestsellers Everything I Know About Love and Ghosts.

Her debut memoir was all anyone could talk about when it was published in 2018 and now,  there’s some exciting news for fans of Everything I Know About Love. It’s been made into a TV series!

The best-selling memoir is a personal account of life for Dolly in her 20s. In it, the journalist shares both hilarious and heartbreaking tales on love in all its forms, including friendship and romance.

Dolly Alderton revealed she has been working with production company Working Title for nearly four years on the adaptation, so we can’t wait to see what’s been brewing.

Although the book is a memoir about Dolly’s own life, the TV series will be a semi-fictionalised romantic comedy. It will follow two female friends as they begin their first flat-share in London.

A trailer just dropped on Instagram for the upcoming show and it’s only made us even more excited for it – excitingly, the post also confirmed that the series will be airing on BBC One and iPlayer from 7 June.

The BBC synopsis describes the adaptation as a ‘warm-hearted and uplifting Sex And The City for millennials.’

‘Maggie and Birdy, besties since school, finally land in London to live it large, when the unexpected happens – dependable Birdy gets a steady boyfriend… [it] covers bad dates and squalid flat-shares, heartaches and humiliations, and, most importantly, unbreakable female friendships,’ it continues.

Who stars in the Everything I Know About Love TV series?

The adaptation was written by Dolly Alderton herself. It’s ‘written by me and directed by the phenomenally clever China Moo-Young’, she wrote on Instagram. China Moo-Young was the director behind BBC’s Harlots.

In August, Dolly and the BBC revealed who would be starring in the highly anticipated adaptation. Best friends Maggie and Birdy will be played by The Witcher’s Emma Appleton and The Morning Show‘s Bel Powley, respectively. Jordan Peters, of Gangs of London fame, will star as Neil and Scottish actor Marli Siu will play Nell.

Actors Aliyah Odoffin, Connor Finch and Ryan Brown will be making their TV debuts as Amara, Stree, and Nathan.

On the casting, Dolly said: ‘I am beyond thrilled with every actor we have on board for Everything I Know About Love… Aisha Bywaters has helped us find our dream cast and we are so excited to see them inhabit the world of the show and bring its stories and relationships to life.’

When and where can you watch it?

As the trailer above confirmed, Everything I Know About Love will air on 7 June on BBC One and iPlayer.

Piers Wenger, the controller of commissioning drama at the BBC, added: ‘I’m sure people will compare it to Sex and the City, or to Girls but the truth is Dolly is an author in her own right, and she is uproariously funny and it’s a very personal, and at times dark story, but with massive amounts of humour and emotional truths to it.’

On 10 December, Dolly revealed filming for the adaptation had officially wrapped. Sharing the news on Instagram, she wrote: ‘It took ten months of writing and rewriting, four months of shooting and countless hours of lockdown zoom meetings in which @chinamooyoung ended up being able to gauge my EXACT emotional response to notes by my exact facial expressions.

‘Anyone who knows me knows I am an obsessive – the obsessions are frequent and fervoured – but nothing has ever gripped me as much as making this TV show… It has been all-encompassing and hilarious and heartbreaking and technicolour and trippy as f**k. Can’t wait for everyone to see what we made together.’

With the series landing so soon, if you prefer to read the book before watching the TV show, you better be quick! 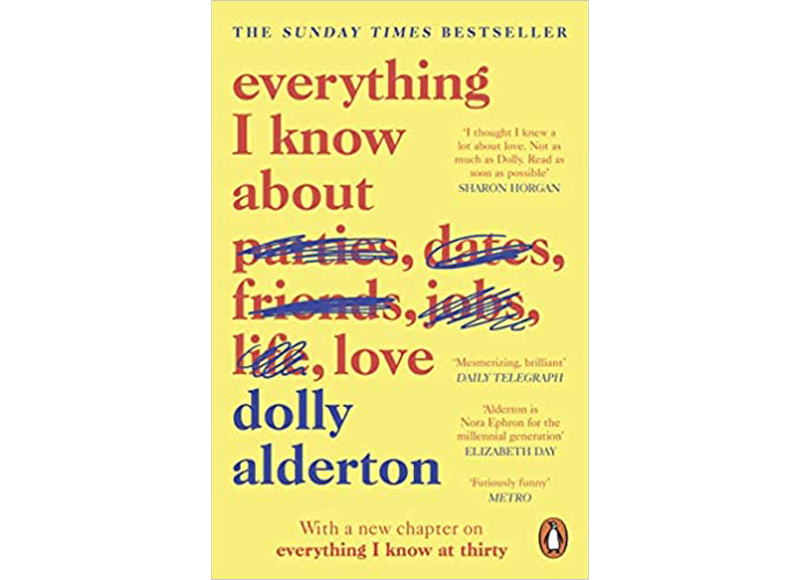 Everything I Know About Love by Dolly Alderton, £8.36, Bookshop.org