… and enjoy the heatwave au naturel, says Esther Rantzen, who loves to sunbathe in her garden wearing nothing more than SPF.

Our climate has created our national temperament. The British weather is so unpredictable that to protect ourselves from a sudden shower, even in August we are buttoned up, literally and emotionally. But given recent heatwaves galore, it’s time to throw away our traditional vests and socks and revel naked in the sunshine. Once we are freed from our inhibitions, who knows how many other boundaries we could leap over? (Carefully, so as not to catch any dangly bits on the barbed wire.) And as a practised nude sunbather, I am happy to lead the way.

I am not the only member of my generation who happily bares all, while younger people are far more self-conscious and are inclined to blush and cover up. Why? Maybe it’s because when we were young, in the swinging 60s and 70s, liberation meant not only releasing ourselves from censorship and convention, but also from our underwear. Think of the 60s hit musical Hair, where the cast cavorted nude. Maybe it’s because we don’t expect to attract the opposite sex as once we did, so we flaunt our lumps and creases with pride. Whatever the reason, I am not the only little old lady who rushes naked into my garden. whenever the sun shines, and lets it burnish every inch.

I know the risks. Too much sunshine can be dangerous, so it’s important to slap on the SPF, especially on the parts that don’t normally see the sun. Above all, don’t get too comfortable and fall asleep – I was lying on my stomach naked in the grass when that happened to me, and I couldn’t sit down for ages afterwards. For similar reasons I have learnt to avoid thistles, stinging nettles and barbecues.

“If your neighbours complain, suggest that they avert their gaze”

If you are a parent it’s best to choose moments when your children are not around – I find that kids are easily embarrassed. And their partners are even more easily outraged. I lost one of my boyfriends in my early 20s when he called round and saw my mother, stark naked, walking upstairs with her bath towel clutched to her front and totally uncovered at the back. At least she was wearing her plastic bath hat. Heredity is an odd thing – now I realise that nakedness must be in my DNA. As the sign in my kitchen says, ‘Mirror, mirror on the wall, I am my mother after all.’

Neighbours can cause problems. Recently the police were called by someone outraged by people next door sunbathing nude. The CPS took the complaint seriously. They said that the wider public has to be protected from ‘harassment, alarm and distress’. All that about a few extra inches of flesh. Have they seen Strictly Come Dancing?

I’ve never had any trouble with my neighbours. When, on my 50th birthday (a glorious June day with roses in bloom and sunlight dappling the lawn), I put on a necklace and a hat (chiffon, slightly more becoming than my mother’s bath hat) and romped around starkers, the neighbours called round with their two little girls. My late husband Desmond was more inhibited than me and started to tell me off, but when he saw the children giggling with joy he got his camera out. I once showed the pictures to my psychiatrist cousin who looked appalled. Whether he was more distressed by my exhibitionism or my shape I don’t know, but from then on I put the photos away somewhere.

“The freedom of no spandex, no waistband, no belts or straps”

Now I have spoken openly about my love of naked sunbathing, a blackmailer might send a drone over my garden and take a few snaps, but there are ways of dealing with blackmail. A BBC producer friend went to Russia at the height of the Cold War to make a documentary, and when he returned, officials from the KGB met him and showed him the incriminating pictures they had taken of him with a honeytrap blonde who had arrived in his room one night. He inspected the photographs and said, ‘I’ll have three copies of that one, two of that one – what a pity that’s slightly blurred.’ The answer to blackmail is to have no shame. 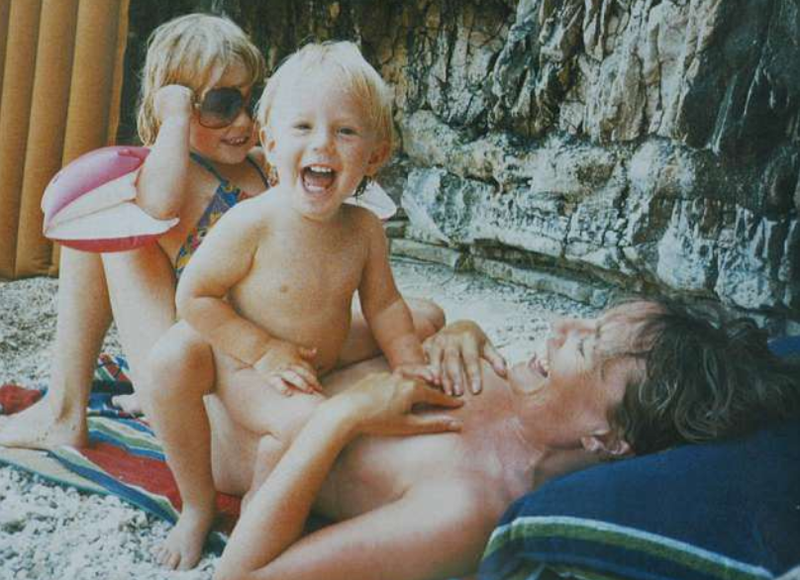 Jeremy Vine interviewed me recently and was horrified when I asked him to unbutton his shirt. I pointed out that he had unbuttoned happily when he appeared on Strictly. He was very uncomfortable sitting opposite me with his nipples showing. So I let him button up. But I am sorry, Jeremy, because you are missing so much. The feeling of a light breeze on every cell and follicle. The freedom of no spandex, no elastic, no waistband, no belts or straps. I skinny-dipped in a secluded swimming pool last weekend without any of the slithery grasp of a bathing costume to impede the soft, warm water.

I learned the joy of swimming naked when I went on holiday with Desmond to Sanibel in Florida in the 80s. When we arrived at our motel on the beach Desi had developed a raging toothache, which we medicated with Kahlua, a coffee liqueur. By the time the bottle was half empty he was numb. Through the picture window, we could see the dark swell of the sea. We went out, ran down the beach, flinging our clothes off as we went, and plunged naked into the waves. When we’d had enough we turned to go back to our motel, and only then saw that on every balcony there was a couple drinking by candlelight, watching. We sheepishly picked up our garments and clutched them to our fronts as we returned
to our cabin.

So I limit my nude sunbathing now to my garden. Why not follow my example? And if your neighbours complain, lighten up CPS, just suggest that they avert their gaze. In 2010, when I was canvassing around Luton in my short political career as an independent candidate, several times the front door was opened by gentlemen wearing only their tattoos. It’s time you secret nudists came out of your closet, if only in your garden. When the sun shines, take off your clothes and live.