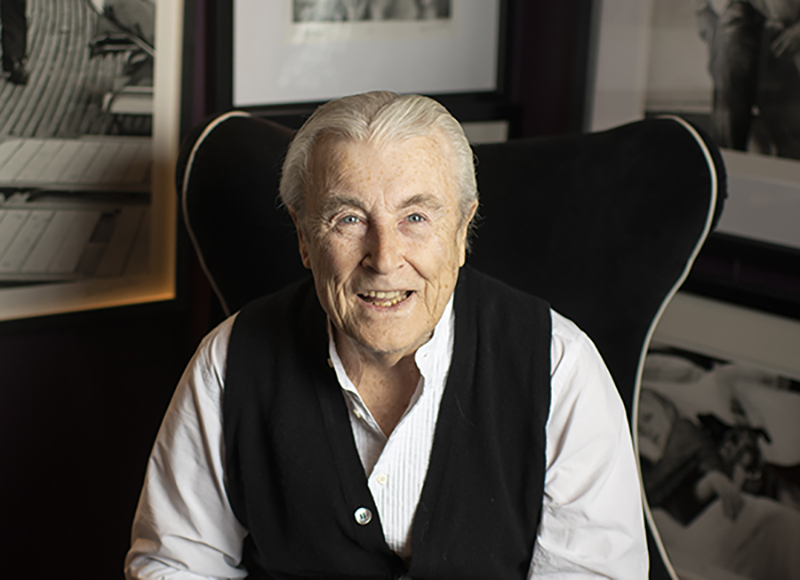 From his very famous friends to a camera lost and found, photographer Terry O’Neill reveals his life beyond the lens.

I trained as a jazz drummer, so music has always been a big part of my life. I have more than 5,000 CDs – I find online music services such as Spotify way too complicated – and I always have one playing. Eric Clapton is a friend and would have to be my favourite; I’ve shot him many times.

This camera was presented to me by Leica; it has my signature on it. I’ve always loved their cameras – I shot Audrey Hepburn with one. I left it in a taxi a few months ago and whoever found it tried to sell it. Luckily, someone alerted me and I got it back!

Acqua di Parma Colonia aftershave is my favourite. I wear it most of the time. I discovered it when it was relaunched 25 years ago and was instantly taken with its fresh scent. I really love the bottle, too.

My family used to go to Cork every summer, because my father was from there – I loved it. I’m about six or seven in this photo, with my parents and my late sister, Angela, my father’s sister, his brother and Father Slattery, the local priest who was a great family friend.

I met Frank Sinatra in 1968 after Ava Gardner wrote a letter of introduction; I walked on to his film set and handed it to him. For the next 30 years, I was one of his main photographers. I shot him more times than I could count and he became a friend.

This was the first $100 I ever earned, for shooting Fred Astaire for Life. I moved to LA in the 1960s and met all these movie stars. I spent more than 30 years living in LA and New York – many of my best career moments happened over there.

I collect offbeat watches, and have about 50 or so. One is from Concorde (left), which I used to fly on every week. The middle one is from Ferrari – I don’t drive, so I’ll never have the car, but at least I have the watch. I liked the colour of the Sekonda.

This T-shirt has my own image of David Bowie on it. I have another one with Muhammad Ali. I feel so proud to walk around wearing them. Sometimes people stop to ask me about them. Thankfully, they believe me when I say I took the photo.