The UK went dog-mad during the pandemic, with estimates suggesting dog ownership increased by ten per cent to around 12 million. Did we have a clear idea of what we were going to do with all these four-legged friends once the lockdowns ended? Not really – we just knew we wanted their company to ease the pain of being stuck at home.

Then the kids went back to school, some of us went back to work, but what about the lockdown pups (now demanding teenagers)? Of course, we felt terrible about leaving them. So, to assuage the guilt, we bought them stuff. A whole load of stuff.

The global dog clothing and accessories market hit around £7.1 billion in 2020 and is estimated to reach £12.24 billion by 2028, according to market research firm Million Insights. 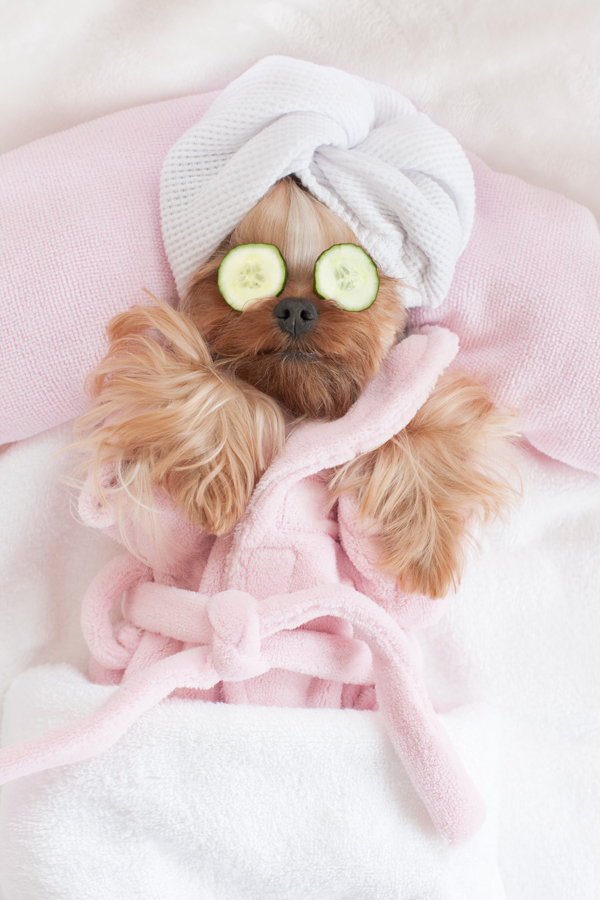 In the UK, Pets at Home has experienced a huge demand for its pet spa treatments. ‘We’re seeing many trends from the human market emerging for dogs now,’ says Claire Gavin, director of creative development and innovation. ‘In 2020 we had 77,000 dogs visiting our spas in the run-up to Christmas, and we exceeded that in 2021. I had to book in my cockapoo Amber weeks in advance!’ (Amber got a berry burst scented shampoo, a hydrating butter moisturising treatment, a blueberry facial and a teeth clean followed by a fresh-breath foam, before a special balm was applied to her paws and nose. She left sporting a bow tie.)

Victoria Keating, director of the Animal Magic Family Pet Retreat in Oakworth, West Yorkshire (offering crèche and pampering services), confirms that the pandemic has pushed up the amount that owners are prepared to fork out. ‘Pre-Covid my average customer spend was £200 per month. Now it’s £600.’

It’s not surprising companies are chasing the ‘hound pound’ given this ballooning market and the fact that, according to Mintel, 51 per cent of pet-care buyers would rather cut spending on themselves than on their pets.

And a fair bit of scrimping would need to be done for anyone wanting to enter the world of the designer dog. You can drop £12,000 on a Christopher Howe dog settee or £640 on a silver-plated bowl set from Selfridges. Then there’s the Alessi dog waste bag holder (£34) and Aesop Animal Wash (£27).

‘Our builders have never done one before, and my dad thinks it’s the maddest thing he ever heard,’ says Nicky. ‘Now, after muddy walks, we can pop her straight into her own warm shower area. No need for her to shake herself dry all over the house!’

Nicky is also making a list of must-haves for India’s wardrobe. ‘She hates the cold so a Barbour jacket is the first priority, followed by a Ralph Lauren jumper. We spent £100 on a turquoise leather collar from Selfridges that looks like jewellery. India is our baby, but we believe in discipline, exercise and love in that order to raise a well-rounded dog. We just want to spoil her in the process.’

And like many of us, the lockdown dog needs a curated social life, too. Belle Boonroong, a data consultant based in London, has three pomeranians who are a hit on the canine party circuit. ‘In 2019 it seemed like we had a [dog] birthday every month,’ she admits. ‘We also threw a joint dog birthday party with a Hawaiian theme for Cedric and a couple of his friends at Neverland beach huts in Fulham – it cost about £900 between us. We had 27 dog guests, gift bags for them all, birthday cake and treats.

‘Last July, after Covid restrictions had lifted, we did a birthday for Cedric and Bilbo in Regent’s Park for around 15 dogs and their humans. I spent about £200 on gift bags, drinks and food, and got a bespoke cake from Dandie Dog Cafe.’

Billy, a four-year-old parson russell terrier, is a big fan of his birthday get-togethers, says owner Collette Cooper, a musician and actor. ‘He has loads of mates so they have a proper rave,’ she laughs. ‘I make goody bags for his friends which consist of Earth Animal chews, Fresco dog treats and Sniffe & Likkit grooming products.’

So if your New Year resolution was to budget better, we have one piece of advice… do NOT buy a puppy.

READ MORE: Has our dog-loving obsession gone too far?