Having looked after his mother, who has Alzheimer’s, Mike Barnes offers hard-won wisdom to those embarking on the often gruelling – but also joyful – task of caring for a loved one.

I’m sending you the news I needed to hear myself. Needed and still need often, ransacking confusions to find a clear way forward. I have moved my mother Mary four times in seven years. These moves, I see now, map out the progressive stages of Alzheimer’s. But the stages are never neat, they are taking place in a person, with all her quirks and qualities, and different parts of the brain will be affected to different degrees. Plus, someone with Alzheimer’s is as subject to moods, health, the weather and the events of the day as the rest of us.

The first few weeks and months as a carer will be remembered as the time of decisions you’re not yet used to making for another person. This will be easier and you’ll beat yourself up less if you remember that, at every stage, being with the person you’re caring for is the best way of caring for them. Arranging medical attention, monitoring nutrition, hiring extra help, managing legal and financial affairs, shopping and washing – all these matter. But being with them matters more.

We have nothing better to give our loved ones than our presence and our time. Being with that person is the only way of caring most likely to be right and least likely to be regretted. All other decisions and actions can be delegated to others. 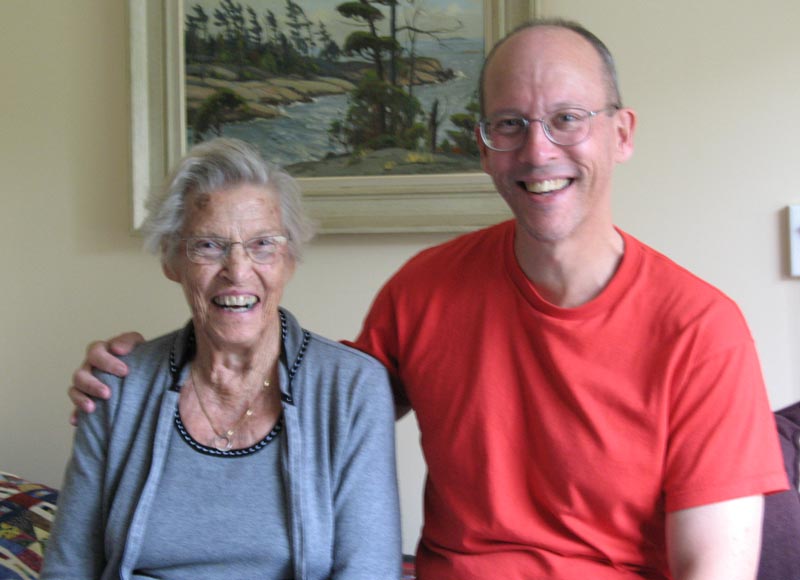 The truth is there is no graceful way to take control of someone’s life. Their driver’s licence, their banking, their choice of where to live. The lifetime habit of asking, ‘What would you like?’ is a hard one to break. So caregivers, even of those in comas, go on asking. Errors creep in from wanting to let the dying keep what’s theirs. So how do you make peace with getting things wrong when you so badly want to get them right?

I don’t know, and still wrestle with that every day. But I think now that mistakes made from love should never be regretted. Wouldn’t you feel blessed if the only mistakes people made with you from now on were born from love and an ardent wish for your wellbeing? You’re only human. Forgive yourself.

I tried to fit caring for my mother on top of everything else – working, executing my father’s estate after his death, managing my own bipolar condition. But caregiving is too big. If you’re determined to do it well you’ve got to offload elsewhere. I could have hired an executor. I could have hired myself – as executor and caregiver – and reduced my working hours. I could have hired, as I did later, helpers. In short I could have treated myself with half the consideration I would treat a stranger collapsing under multiple loads.

I got things right, too – lots of them. And you will. But you will increase that number by making an accurate inventory of your resources. How much money? Buy as much time, space and equipment as you can. Throw money at the problem, but obviously don’t throw more than you have. And how much room have you in your own heart? You can’t avoid the intimacy of such a question because caregiving is going to be demanding. The more honest you are about this the less likely you are to give more than you can. Caregiving places gruelling demands on health, jobs, relationships. Often it dissolves or wrecks them. Anything felt to be expendable – friends and hobbies – usually disappears early on.

In the months I was struggling to learn to be her caregiver, Mary was journeying deeper into dementia. The phone and TV were a nightmare. I taped HOW TO USE signs to each one. Yet often she couldn’t turn the TV on or the shrieking volume down. The phone sometimes connected her to me, but often to misdialled strangers, some of whom contacted me to claim the money she’d promised them.

The shower was another minefield. She’d always taken baths. Now she had to contend with a dial with coloured markings and a safety chair. The forcefulness of the jetting water frightened her, as did the three-sided alcove, a tiled cage with the curtain closed. I showed her, several times, how it worked. Later, towards the end of her time in that home, community care workers tried to help her. Sometimes she let them, sometimes not. In the year or so between, I’m ashamed to say I can’t be sure she had more than a handful of showers, or how she might have been keeping herself clean.

The story of my mother’s life was simplifying on its way to breaking down. As caregivers our job is to try to hear the story of that life, what it was and what it is becoming. With dementia there was often a panic in her face as she struggled to wake up, wild glaring eyes, even tears as she felt trapped between dreams and waking, unable to get fully clear.

That was when we argued. Why did I think she’d lost the money? Why wouldn’t I give her more? Why couldn’t she go home? These rows only ended when I left the room, came back 20 minutes later and began the visit again. Then she would beam a smile of welcome.

Sometimes I was heartened by our new ability to let off steam and ease the pressure cooker we were in together. Her readiness to fight seemed part of a new emotional openness. For it wasn’t just anger. An undemonstrative person all her life, she now gave voice unequivocally to love, gratitude, need and loneliness. To all the ways she felt. She hugged more naturally than ever before. No stiffening if it went on too long. She grabbed and held.

During the first autumn I started getting calls at any hour. I jumped at the sound at night, my heart thudding. Her hollow voice was at the other end. Where am I? Where is everybody? There was no hiding from such primal questions, when the very essence of existence seemed to be dissolving for her. I either talked her down or promised to drive over. The sound of hitting bottom couldn’t be clearer and I didn’t have a clue what to do about it. Was there anything to be done? Except – be with her more. My only regret, a deep one, is leaving her alone far too much.

Before I end I want to say something important. Look at the person you are caring for. See them with honest, open eyes. See them for the warrior they are, meeting terrors you can’t imagine. The bravest, most persevering person you’ll meet is a person with dementia, trying to dress herself or tackling the dilemma of a meal.

They show depths of resilience rising to heroism as they fight hard against dementia’s encroachments, and a capacity for joy that is missing from public discussions about their condition. Dementia is spoken of as a terrible end to the real life that came before. It strips a person, piece by piece, returning nothing of value. But that is only true in part. For I have found some unexpected riches in the cave of dementia and it is my mother who has brought them out to glitter in the sun.

I once took her to a restaurant where you could sit outside and listen to music. The air was mild and as the man behind me started singing, accompanying himself on a keyboard, Mary moved to the sounds with a jerk of her head. Instantly she forgot the other people, her food, me sitting opposite. Gazing wide-eyed, with a rapturous smile, she started moving her whole body, unselfconsciously drawn into the music.

I watched her close to tears, glad she’d reached this point, feeling that she must be somewhere near the end (never guessing how deep into dementia she would go six years later, how much of yourself you can lose and not only not die but remain substantially yourself). I rallied then and saw what was in front of me: this breath-stopping, dazzling seizing of pure joy. I felt strong, proud and happy because of what she gave me in that moment. This is the best of it, and it is no small best.