I came across an old photo of myself recently. It was a picture from the pre-digital age, a time that now seems almost as far removed as the Mesozoic Era, albeit with fewer dinosaurs and nicer clothes. There I was, aged ten or 11, smiling guilelessly at the lens, cheeks squidgy with puppy fat, my face overexposed and slightly sweaty. It wasn’t a
flattering image. It looked so different from my carefully angled selfies. Yet that earlier photo had an unvarnished realness that felt… well, nostalgic.

I’ve been thinking a lot about how I look in photos. Not because I’m a monstrous narcissist (at least I don’t think I am; but maybe that’s what a monstrous narcissist would say) but because I feel that, for women, there’s a mounting pressure to look good on-screen rather than in real life. When someone takes a photo today, there’s a high chance it will end up on any number of social media feeds. The result for me is that, when someone wants to snap a happy moment, I panic that I’m going to look ugly, spotty or too big and legions of people will pass judgment on this frozen moment in time, including exes whom I imagine are now dating Victoria’s Secret models.

In the grip of this collective anxiety, our make-up is becoming ever more extreme. We’re told we need to ‘contour’ our faces, slashing dramatic lines of brown below our cheekbones so that we end up looking less like Kim Kardashian and more like GI Jane. We’re advised to microblade our eyebrows, which basically means entrusting a stranger to tattoo your face. We’re encouraged to wax, stick hair extensions to our scalp and affix gel to our nails in order to look good on Instagram.

It’s the Love Island effect. I enjoyed ITV’s hit reality television series that followed millennial singletons pursuing romance (and a £50,000 prize) in a Mallorcan villa. But even I had to admit that the women on that programme had a heightened visual aesthetic that infected the mainstream like a virus. They had perky bodies, spray tans and fake lashes. And yet they were not A-list movie stars with stylists on speed-dial. They were ordinary people – air hostesses and solicitors – who just so happened to look noticeably out-of-the-ordinary.

The result is that the line between normality and celebrity has become blurred to such an extent that the average woman feels she’s got to try harder to keep up. I am no exception. This is how I explain the fact that, a few weeks ago, I got lash extensions. I liked the idea of not having to wear mascara every day, so when a beauty therapist offered to do it for me in advance of an event I was attending, I agreed. Nervously, I asked for barely there extensions. The therapist nodded and I spent a pleasant 45 minutes with my eyes closed. When I opened them I was horrified. My eyelids were fringed with thick black spider’s legs. I looked like a drag queen Maria Callas. Maybe, I told myself, it was the lighting in the shopping centre that was making them look so intense. So, with typically
buttoned-up English politeness, I said thank you and handed over £70. The next day, I still hated the lashes. I felt so removed from my real self I could barely look anyone in the eye, which was ironic.

‘I got lash extensions and they’re hideous,’ I texted my friend Emma. ‘Show me,’ she replied. I sent her a photo. And here’s the thing: in the photo, the lashes looked amazing and my eyes looked brighter and more defined. If I had wanted to become an Instagram influencer or apply to Love Island, I’d probably have kept the lashes. That’s when it struck me: this is how we’re encouraged to think of beauty. Not as something that exists for the everyday, but as an on-screen filter we apply for an alternate reality. I realised then: this is not how I want to live. I just want to look normal on the tube.

My lashes lasted less than 24 hours before I paid another small fortune for someone else to take them off. Even if I look worse in photos, it turns out I’d really rather be me.

the flowers from The Odd Flower, a subscription service for beautiful, seasonal blooms delivered to your doorstep. 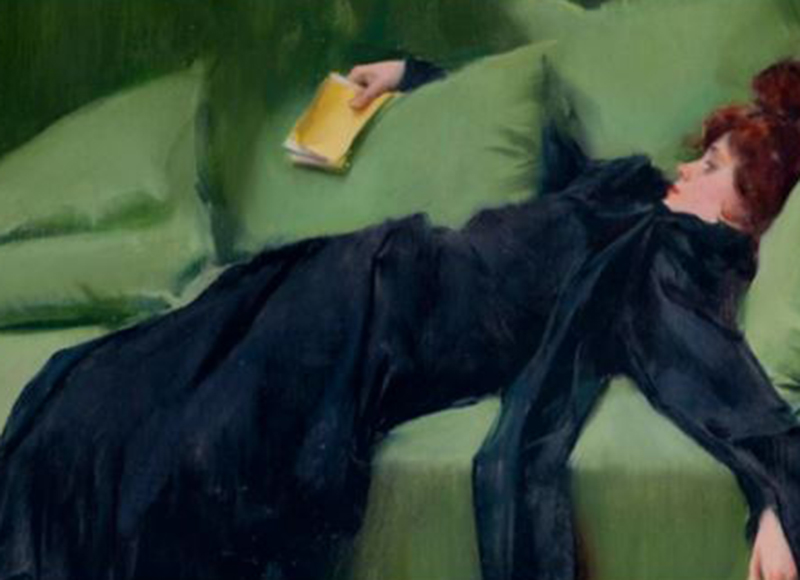 Ariana Grande’s ‘Thank U, Next’. My favourite song of the year, which perfectly encapsulates how I feel about all my exes.

Childline says social media could be the cause of a rise...

Rare Birds: The subscription book club with a difference

The best days to shop at Aldi have been revealed

Why we Brits have never got our stiff upper lips round...

Dr Clare Bailey: How to feed a good mood

Uses for vinegar: From killing weeds to soothing sunburn