Struggling in the heat the UK has been basking in this week? Christine Lampard has got the perfect solution – a gorgeous linen dress that will have you breezing through the rest of summer in style.

The presenter, who is covering for Lorraine Kelly as host of her eponymous ITV show while she’s on holiday, appeared on screen on Tuesday morning in a chic beige linen midi belted with a contrasting tortoiseshell buckle, accessorised with simple gold jewellery.

The cool, casual combination, which she finished off with nude pointed court shoes, was a hit with eagle-eyed fans, who were keen to find the piece and add it to their own wardrobes. Luckily, it’s a high street find, and even better, it’s currently on sale.

Warehouse’s Linen Buckle Midi Dress originally retailed for £56, but thanks to a seasonal discount, you can snap it up for just £42 – a saving of 25 per cent. We love Christine’s tonal stone colour palette, but if you prefer something slightly less neutral, you can also find the outfit in khaki, for the same reduced price.

Not only is the dress perfect for the remaining days of hot weather, come autumn it could easily be layered up with tights and a cosy cardigan, or worn as a pinafore with the addition of a long-sleeved top underneath. 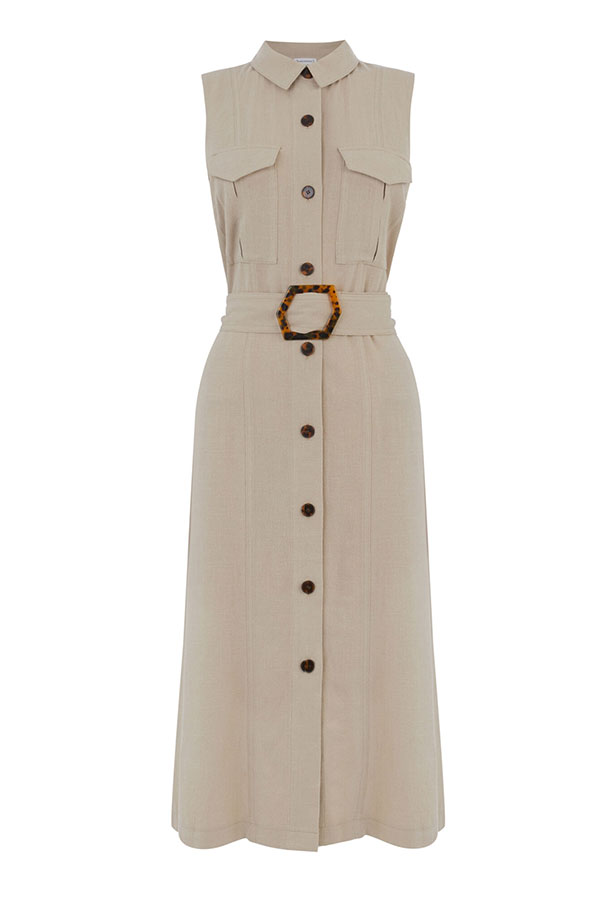 Customers who’ve already placed their order have given the dress five star reviews, and the only downside? As with any linen item, you’ll have to commit to some pretty regular ironing.

‘It fits perfectly, hangs beautifully, as the fabric is nice and weighty, and is bang on, lengthwise,’ reports one happy shopper. ‘I would just say that if you like your fabrics to look just ironed and pristine, this won’t be for you: it’s linen…or rather has a linen content…so it does crease. When it arrived, I did think, oh my! But everything else about it won me over: linen is as linen does!’