Welcome to Chef Crush, our foodie series where some of the industry’s finest share their expert tips with us. In this instalment, founder of Freak Scene, Scott Hallsworth shares his must-have ingredients, and how to make perfectly crispy sweetcorn tempura…

The story: Previously Head Chef at Nobu and founder of Kurobuta, Scott opened Freak Scene in March 2018 following its success as a pop up in Clerkenwell last year. Freak Scene takes inspiration from bustling Singaporean hawker centres with a South East Asian-inspired menu.

The philosophy: ‘Mixing up the London food scene with ‘Curious Asian Plates’, and of course, sake-bombs!’

The plan: ‘I’m keen to bring something similar from Frith St to the festival scene.’

The can’t-live-without ingredient: ‘I couldn’t live without Japanese soy sauce. It’s such a versatile seasoning and adds umami [savoury flavour] to anything. It can be used in a marinade or in a stir fry… It has so many purposes, that’s why it’s an essential.’

Easy way to impress: ‘A good cheat ingredient is kombu, a giant kelp that grows in ocean, in the north of Japan. It’s packed with umami and has been around for centuries; Japanese chemist, Professor Ikeda, first isolated the properties that it contains to provide its umami taste in 1907. It gives everything a quick boost, whether it’s in a marinade or a soup. It’s really easy to get hold of on the internet.’

How to perk up a lunchbox: ‘Nori, the Japanese seaweed, is a great substitute for wraps. You can fill a couple of sheets of nori with anything – sticky rice, avocado, or vegetables – and it makes a savoury, crispy wrap that’s ideal for an alternative lunch on the go.’

Why we love Scott: He makes food fun – and photogenic – as well as delicious. Freak Scene has a really upbeat vibe (with super-friendly staff – seats are at the counter by the open kitchen so you can watch the chefs work their magic.) We loved the fresh mix of flavours in the colourful and eye-catching dishes – favourites include the miso frilled black cod tacos and the perfectly cooked scallops. A brilliant addition to the buzzy Soho restaurant scene. 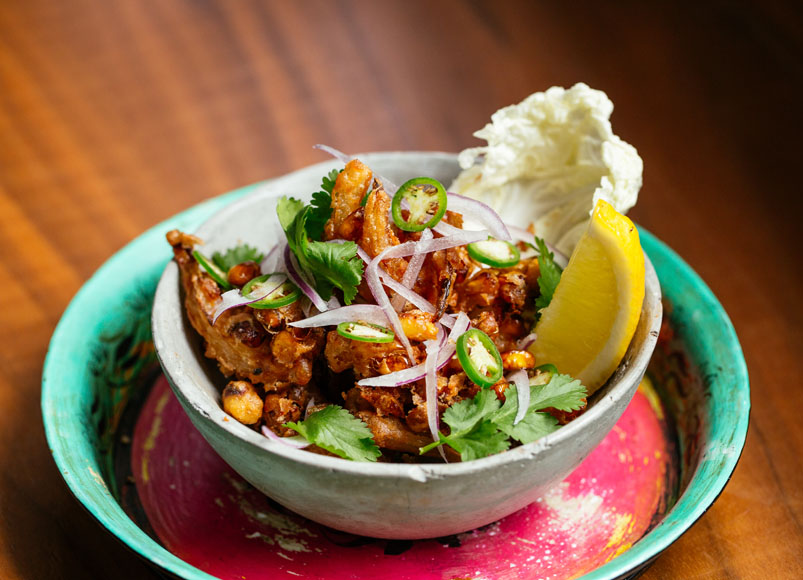 FOR THE BATTER
150g tempura flour
25g potato starch (corn starch would do)
260ml ice cold water
1 egg yolk
You will need a small deep fryer or pan of oil that safely holds about 1-1.5 litres of oil, such as rapeseed.

FOR THE CORN FRITTER MIX
4 heads of sweetcorn, husk removed
150g white onion, cut into 2mm thick half moons
4 lengths of spring onion, cut on a diagonal, about 4-5cm in length
Tempura flour to dust the above

Freak Scene can be found at 54 Frith Street in Soho; freakscene.london