Charlotte Tilbury’s eponymous make-up line is one of the most popular in the country, loved by A-listers and consumers alike. But what many don’t realise is that the bestselling product from the brand is actually its skincare – and now Charlotte’s expanded into that arena even further with the launch of her first ever serum.

Inspired by ‘holistic wellbeing and the healing frequency of light and energy’,  the crystal complex combines moonstone, ruby, rose quartz, crystal quartz and amethyst for a serum that improves moisture levels, texture and radiance with every application.

‘While developing my supercharged serum with scientists, I wanted to ensure that my formula captured not only the latest innovations in technology and the best of modern biocosmetic science, but also the spiritual and mythical power of crystals,’ Charlotte says of the launch.

‘I was inspired by the myths and legends that suggest crystals have powerful properties. For centuries, people have carried them with them and kept them in their homes, due to their belief that they radiate a positive, pure and glowing energy.’

It’s recommended that you use the serum in tandem with Charlotte’s existing and rather legendary Magic Cream, which sells one every two minutes and is considered something of a secret weapon amongst supermodels and make-up artists who swear by its glow-inducing abilities. 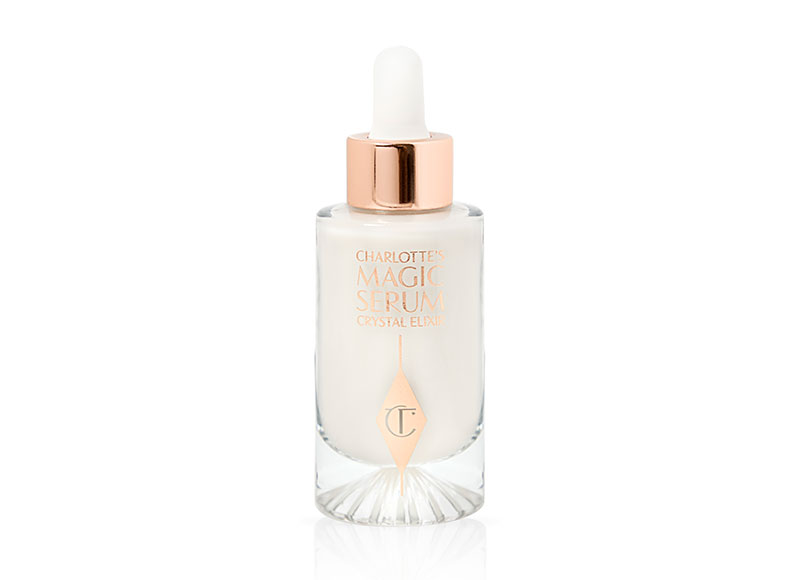 As you might expect, with such a luxe line-up of components, the new Charlotte Tilbury serum doesn’t come cheap, retailing at £60 for 30ml. However, that hasn’t deterred fans, 8,000 of whom joined the waiting list to be among the first to get their hands on the 16 April launch.

You only need to apply a few drops each morning and evening, so a little should end up going a long way. There will also be a travel-size 8ml version available for £25 if you want to trial the product before you commit to the full spend.

Plus, those who’ve already given it a try say it’s worth the investment – 93 per cent of testers said their skin looked younger, and 91 per cent said their pores were tightened and fine lines and wrinkles appeared reduced after four weeks of use. Tempted? It’s available to shop now, but move quickly – we predict that this one will fly off the virtual shelves fast.