How was your day? Mine was brain-curdlingly, Rumpelstiltskin-stampingly, hair-shreddingly frustrating, due to gross computer befuddlements – until I spent a joyous couple of hours on the phone to various call centres. I’m not being ironic. I love ringing call centres – or at least I have come to, since I changed my attitude and my approach to the experience.

I confess that when this new way to do customer service came into our lives in a big way – when was it, 15 years ago? – I was furious about the whole thing. It seemed to represent the very worst kind of business motivation, based entirely on minimum cost to the company, maximum effort for the consumer, with ruthlessly exploited workers in between.

Also, taking jobs away from the UK and imposing impossible demands on people in other cultures, who might speak excellent textbook English but could hardly be expected to understand twerps like me, who find it hard to express ourselves in our own first language when it comes to technical issues. 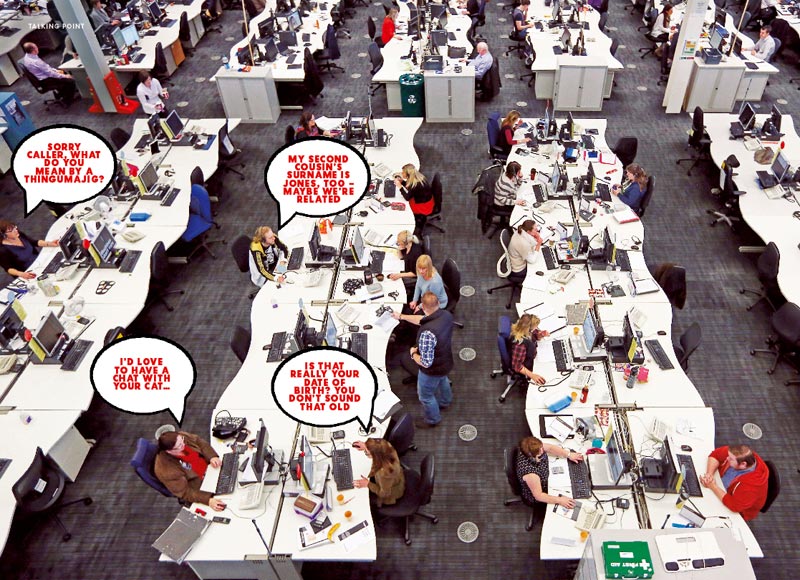 I remember one of my exchanges with a far-flung call centre, over problems with a very early modem. Except I couldn’t remember the word modem, so I kept calling it ‘the gizmo’. The poor young man didn’t have a clue what I was going on about and – as an important deadline flew past and off into the distance and my email still didn’t work – I was getting more and more desperate, eventually shouting: ‘The blue thing! The blue thing on my desk!’

Then I did something I still regret. I shouted, ‘Oh, forget it!’ into the phone and slammed it down. I immediately felt terrible, thinking about that young man somewhere very far away, doing his best in broiling heat in a battery-chicken office building, trying to earn a crust. Just as I was, with my now disastrously late article. He didn’t deserve to be shouted at – and I had no way of ringing back to apologise. It had taken me half an hour to get through to the b***** call centre in the first place.

After that, I assiduously avoided them and found a local freelance geek to sort out everything tech-related for me – at a price. Then Twitter came along. The early glory days of Twitter, before the ghastly trolls, corporations and bores got in on it, when it was a like an infinite cocktail party of funny, lovely people, ready to chat and banter. Some of them world famous (getting a reply from the American drag queen RuPaul was one of the happiest moments of my life), some of them just other ordinary people, keen on constant distraction and time-wasting, who happened to be incredibly funny.

One of the most hilarious ones I struck up a banter-ship with was a young man from the north of England who, it turned out, worked in a call centre. I asked him how someone with his brilliant wit and originality coped with having to work from a script, and he told me that, most days, he would get at least one person who was really nice. Someone who would use his name and connect with him as a human being and they’d have a laugh. Sometimes, he said – he was an aspiring stand-up comedian* – he got great material from his chats with them.

From that moment I decided to change my call-centre tactics, and far from avoiding those 0800 numbers, I was positively eager for an opportunity to try them out. It was a revelation. First of all, I listened when the person who answered told me their name – and I checked it back with them: ‘The thing is, Helen – you did say your name was Helen, is that right? Well, Helen, you see, you won’t believe what I’ve done, I’m such a numpty…’ And then I set off, attempting to tell her my issue with clarity and warmth, doing what my mum has always told me to: putting a real smile on my face as I talk on the phone – she swears people can hear the smile and I think she’s right.

It worked. Helen and I got on famously, she sorted out my problem, and when I eventually hung up I was smiling for real. It was more than just a better experience than shouting and slamming the phone down – it was a pleasant, even life-enhancing interaction, and that’s how I approach all call-centre exchanges now.

I always ask the person on the line where they are and tell them where I’m calling from. I ask them what the weather is like at their end and – hopefully without being patronising – I try to turn my travails with whatever it is into a bit of a madcap comedic narrative. I usually get them chuckling and – as any stand-up comedian will tell you – it’s incredibly satisfying to make someone laugh. Possibly even more so when you know the person giggling is doing a job that involves a lot of strangers shouting abuse at them and slamming the phone down.

It doesn’t always work. I do get grumpheads and stiffs who don’t respond, but the vast majority do… and I think I get better service than I did as a cross shouty lady. So today, at the outset of my great computer kerfuffle, I chatted with Zakk, who is from Lithuania and now lives in Cork. I told him I’d visited Vilnius 20 years ago and loved it. He said I wouldn’t recognise it now. After ten years in Ireland, he’s mostly lost his accent and pronounces ‘three’ as ‘tree’, which was very endearing.

Then I spoke to a lovely young woman from the Czech Republic, but I didn’t have a chance to do the full interview with her and find out the names of all her cousins, although she was very nice and we did have a laugh.

And then I got Tito, on the line from Manila with a big old smile in his voice. It was a long call with a lot of waiting for things to download and upload and generally do the gizmo hokey cokey, so I told him I’d been to his city and liked it very much, apart from the traffic. He agreed. He had remote access to my computer to make the necessary changes, and while we were going through the boring bits, he drew funny pictures on my screen and we chatted. Tito is 57 and has two sons, aged 18 and 19, who still live with him and are good to him. He likes music and was interested to know what track I’d last listened to. I played him James Arthur’s ‘Impossible’, holding my mobile phone to the landline receiver, and he liked it.

He told me he wasn’t named after Tito, Michael Jackson’s brother, but Marshal Tito the former leader of Yugoslavia, so I introduced him to my Serbian husband, whose father used to work for that Tito. He told Tito that we have a daughter of marriageable age if he would like to introduce his sons. Much laughter. Then Tito chatted to my daughter Peggy and finally I introduced him to the cat.

Tito brightened up all our days and I gave him a glowing five-star rating when the company in question sent me a feedback questionnaire afterwards.

So I’ve discovered, approaching the call-centre exchange the positive way I learned from my Twitter friend has benefits for both sides. Tito got the credit he deserved – I hope he got a pay rise, too – and I got my computer fixed. But more satisfying was the feelgood factor of making what felt like a meaningful connection with a total stranger, with a good sense of humour, who lives on the other side of the world. I’m almost looking forward to my next computer meltdown.

*The last I heard of my Twitter pal, he had moved to London and was writing material for big comedy shows.