Since its launch more than 100 years ago, Cadbury Dairy Milk has been one of the country’s favourite treats.

Since that day, we’ve seen the introduction of plenty of additional Dairy Milk varieties, such as fruit and nut, caramel, and more – and now, there’s another bar being added to the core range that’s even more significant than most.

Cadbury has announced the launch of Cadbury Dairy Milk 30% Less Sugar, a product which took a team of over 20 scientists three years to master. The chocolate contains 30 per cent less sugar than a standard bar, with no artificial sweeteners, colours or preservatives.

Katrina Davison, Brand Manager explained of the new launch: ‘We’ve recognised that there is an increasing trend for people wanting to manage their sugar intake and that’s why we have worked tirelessly to create a Cadbury Dairy Milk bar with 30% less sugar, which stills tastes great.

‘We are committed to responding to relevant consumer trends, and are always striving to offer chocolate lovers greater choice through exciting innovations and portion control offerings.’ 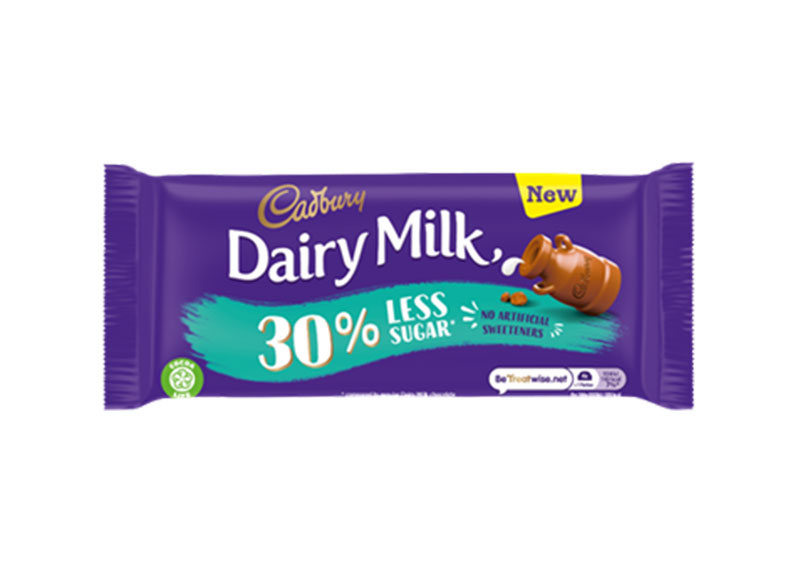 Cadbury Dairy Milk 30% Less Sugar will be available in stores nationwide from July, and will sit alongside the original Dairy Milk and its various other flavours. According to The Telegraph, the sugar content has been reduced from 56g per 100g to 39g per 100g, but calorie counts between the two bars remain similar.

To retain the melt-in-the-mouth quality of each square, the development team have ‘replaced the physical functionality of sugar with fibre, preserving the structure of the chocolate and the unique texture.’

Cadbury says that creating the lower-sugar alternative ‘marks the most significant innovation in the brand’s history’, but is a case of offering chocolate lovers more options within its range, rather than replaced the much-loved existing offering.

Mondelēz International, Inc, the company which owns Cadbury, is said to be working on more lower-sugar version of its most popular snacks and sweets, including the Oreo Cadbury bar and Jelly Babies.

The common BBQ mistakes we all make

Asma Khan: ‘In India, the lynch mob would have turned up...