Most wannabe authors would give up the will to write after 98 refusals, but not BONNIE GARMUS. The first-time novelist tells Lynn Barber about the female rage that led her to write Lessons in Chemistry and the rescue dog that became one of the book’s best loved characters. PHOTOGRAPHS: ANNIE BUNDFUSS

These days it’s pretty amazing for a 64-year-old woman to get her first novel published at all, let alone in 35 countries. Especially if the woman is a privileged white American with no tragic back story to tell. But then Bonnie Garmus’s Lessons in Chemistry is a pretty amazing book. It’s sold over 75,000 copies in the UK since coming out eight weeks ago and shot to number two in The Sunday Times bestseller list. I can’t remember being so excited by any first novel since Donna Tartt’s The Secret History almost 30 years ago. Which, incidentally, Garmus says is one of her favourite books, too.

But, given that she is obviously a natural-born writer, I wondered how she could bear to wait so long. So I went to meet her in a photographer’s studio in West London where she was examining racks of clothes for her shoot. She is tall, slim, athletic-looking, in jeans and trainers.

She is also friendly, which comes as a big surprise. Elizabeth Zott, the protagonist of her novel, is never friendly: she’s difficult, spiky and suspicious of strangers, especially journalists. Of course, she is fictional and Zott, I soon realise, is not a self-portrait.

She is a chemist who, short of money, is forced to present a daytime television cookery programme. However, she presents her cookery as a chemistry lesson– ‘combine one tablespoon acetic acid with a pinch of sodium chloride’– and, rather amazingly, her audience laps it up. But her real message is about female empowerment.

The novel is set in 1961 ‘when women wore shirtwaist dresses and joined garden clubs and drove legions of children around in seatbeltless cars without giving it a second thought’ and when, above all, they were meant to be full-time housewives, cooking, cleaning and looking after their darling children while hubby went off to his important job.

Garmus set her novel then because that was when her mother was a full-time housewife in California looking after her four daughters (Bonnie is the youngest) and she realised how frustrated her mother must have felt. She had been a nurse before marriage and would go back to nursing later, but while Garmus was growing up she was stuck in housewife mode.

Setting the book then made it far more difficult for Garmus to get the chemistry right– there was no use googling it because that would include developments not known in 1961. So she did her research by reading 1950s chemistry textbooks then getting two scientist friends to check it. She knows a bit about the subject, having worked for a scientific publisher after university, then being a copywriter specialising in technology, medicine and education. But her original degree was in English literature, so why did it take her so long to write her first novel?

Actually, she says Lessons in Chemistry wasn’t her first; she wrote another novel several years ago and sent it to 98 agents who all rejected it. ‘The problem was it was very long, and one agent said you have no business writing 700 pages as a debut author.’

So, rejected, dejected, she carried on with her day job as a freelance copywriter in Zürich, writing speeches, campaigns, video scripts and presentations for her mainly male clients. One day, while in a meeting with a bunch of men, she put forward her ideas and, ‘Everyone ignored me. Then a man repeated the ideas and everyone said, “Wow!” And that had happened a few times before, and this was just one time too many, so I thought, “Damn it” and came home and wrote the first chapter of Lessons.’ So she started from a position of feminist rage? ‘Exactly.’

She was about two thirds of the way through Lessons when she developed terrible writer’s block. She and her husband had moved from Seattle in Washington State (where they still have a house) to Switzerland then on to London, and, ‘I was sort of depressed because we’d moved again, and I didn’t know anyone in London. Then one of my daughters [she has two] sent me a link to [literary agency] Curtis Brown, which has writing courses, and said, “You should do one of its courses and finish your goddam novel, Mom.” And it was very helpful and got me out of the rut. Then I did an evening course, which was great because I wanted to meet other writers. We’ve all become friends and keep in touch. When Felicity Blunt [Curtis Brown agent married to actor Stanley Tucci] saw my work, she signed me.’

Blunt sent the book out to publishers and it ended up as a 16-way auction. ‘No one was more surprised than me –I was the rejection queen. Two nights before the auction, Felicity said: “You know I love your book but I’ve no idea how it’s going to do, so don’t get your hopes up.” Then she called me after the auction, saying: “OK, scratch that, all these editors are signed up now.”’

Apple TV also signed up to make a TV dramatisation, starring Brie Larson as Zott, which will come out next year. Garmus hasn’t seen the scripts yet but tells me, ‘They’ve said repeatedly that they want to stay true to the book, so I’m just trusting it will turn out well.’

Her only contribution was to send them photos of lurchers to help with casting one of the leads, Six-Thirty, a dog and the only character in the book, Garmus says, drawn from life. ‘She was based on a rescue dog called Friday who we got in Seattle and was really smart, always listening. It was obvious that she picked up words. When we went to Switzerland she did an obedience test and got 100 per cent even though it was in German!’

Friday died in Zürich a few years later at the age of 17, and when the couple moved to London in 2017 for her husband’s work, they adopted a retired greyhound named 99 (below). 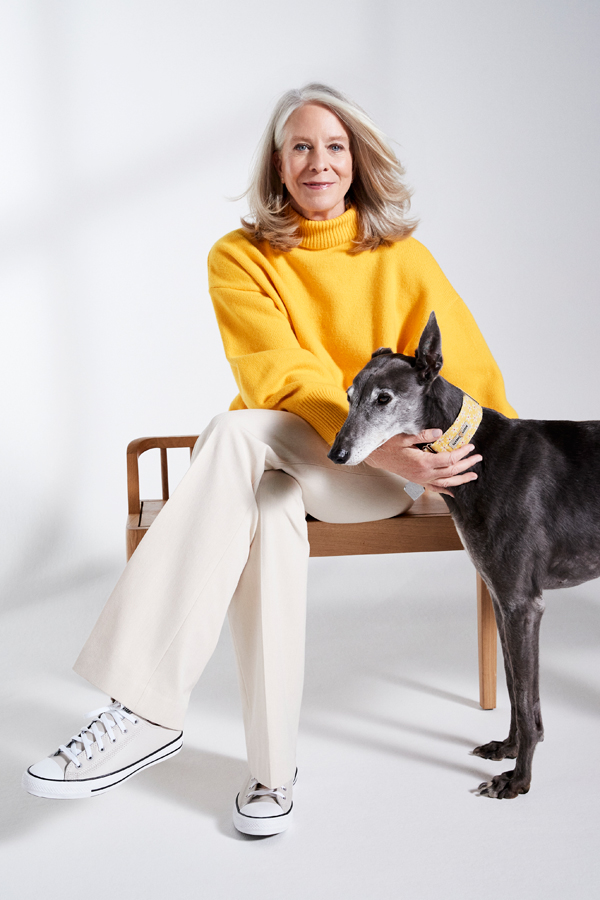 Despite all her years living abroad, Garmus still thinks of Seattle as home. ‘We’ve really loved it here but we like to go back.’ She’s waiting to get her new British visa under the ‘exceptional promise’ category, which is pretty good for the now 65-year-old (her birthday came just days after her novel was published).

All these publishing deals means she’s bound to make a ton of money, but it won’t be life-changing because, ‘My husband and I believe that if you have money, you should be giving back, so we tend to donate a lot – I think we’ve overdone it sometimes!’

Her husband used to work for Google but now runs his own company and the couple mainly donate to climate-change research. Garmus also gives money to homeless people and has worked in a soup kitchen in London’s Tottenham Court Road. ‘I’ve always really enjoyed working with homeless people because there’s a lot of stigma around it but sometimes the reasons for being homeless are really tiny.’

One thing Garmus shares with Zott is a passion for rowing. She was about to join a rowing club when lockdown struck but hopes to do so when her book tour is over. She still uses an erg (ergometer, a rowing machine) five days a week. ‘I kind of hate erging – most rowers do – but I guess I’m addicted to it.’

She’s also keen on year-round swimming, which she does at Hampstead ponds in North London. ‘The first time I went I took my wetsuit but they said, “We don’t wear wetsuits here.” And I said, “But it’s cold!” But then I really enjoyed it. When we lived in Switzerland I swam across Lake Zürich every morning, but that was in a wetsuit.’

Zott is vehemently anti-religion. Is she? ‘I’m a humanist. I’m a big fan of Richard Dawkins. I was raised in the church, my parents were very active members, but when I was aged  eight I started questioning it. I was a huge reader and I didn’t think the Bible stories were very good compared to the Greek, Norse or Native American myths. We lived near a Navaho reservation and I loved some of their culture. I remember thinking the Bible stories were very anti-female.’

She is keen to encourage girls to go into science, technology, engineering and medicine because, ‘These are the best paid jobs in the world and they have the most impact on our lives, but they’re still only 30 per cent women.’ But her own daughters, now in their 20s, took a different route: one is a designer/illustrator, the other works for a University of Michigan think-tank called Poverty Solutions.

So she didn’t push them into science? ‘No. I’m not a scientist. My husband was, he was an astrophysicist, my dad was, he was an entomologist – and my mom was what I consider a scientist, which is a nurse. She went right back to nursing after the kids were grown up and I was really proud of her because it was when Aids was becoming huge and no one in the hospital would work with Aids patients but my mum volunteered for it. And one day I went to pick her up and found her holding the hand of a young man in bed, and he was blind and covered in sores. There were other young men on the ward and I sort of stood in the doorway and said, “Oh, I’m sorry to interrupt but I’ve come to pick you up, Mom.” And I’ll always remember what he said – “I know she’s your Mom but now she’s all of our Moms, too” – because most of their families had dumped them. It brought tears to my eyes.’ Mine too.

Garmus is already writing her next novel, though currently interrupted by doing publicity for this one – she is going to Germany next, then the Hay Festival. She is now what she has always longed to be–a full-time author. It took her a long time to get there but, as with her rowing, as with her swimming, she believes in perseverance.

The UK or the US? I’m fond of both. I love the English countryside and your NHS

Cake or cheese? Both! I’m a good eater

Radio 2 or Radio 4? I like Woman’s Hour but I was just on Radio 2 so I love them both

Netflix or night out? Night out –I love the theatre

Lessons in Chemistry by Bonnie Garmus is published by Doubleday, £14.99*