As the BBC’s guest fashion insider at Meghan and Harry’s wedding, YOU’s editor Jo Elvin reveals all about style coups, Kleenex supplies – and why she hates hats. 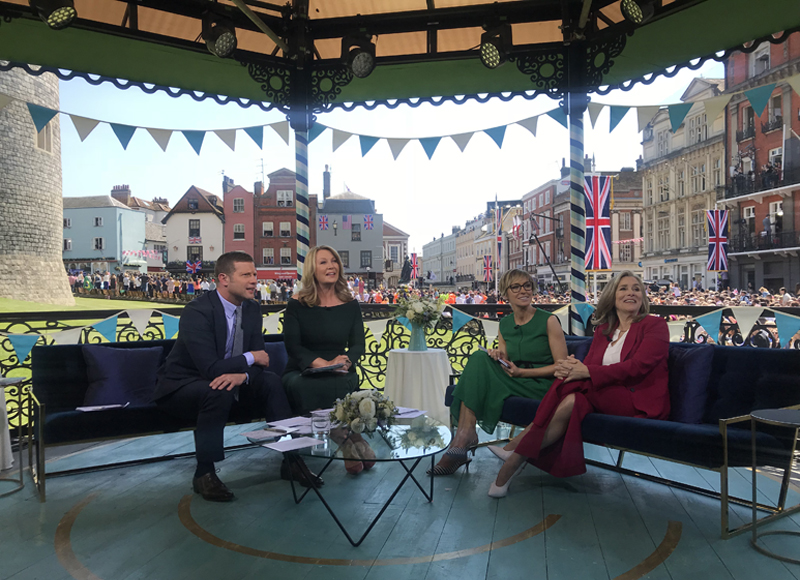 I can’t help it. I’m still thinking about that incredible day. Positively buzzing. I’m in danger of banging on about Harry and Meghan’s wedding long after even they are bored talking about it.

I wasn’t invited, obviously. But I was thrilled – and frankly astonished – to be asked to join the commentary team for BBC One. My remit was to bring expert fashion chat to hosts Dermot O’Leary and Kirsty Young on what the assembled guests were wearing and, of course, analysis of The Dress, live from Windsor.

Racked with terror, I said yes. Who could say no to a ringside seat to watch history being made? My first Royal Wedding was Charles and Diana’s, which I watched from my sofa at home in Sydney, Australia, at the tender age of 11. I could never have dreamed that one day I’d be involved in one.

The actual event was 24 of the most simultaneously nerve-racking and exhilarating hours of my life, but the preparation and fear began weeks before 19 May. My main task was to be able to talk knowledgeably and (hopefully) entertainingly about the styling details of Meghan’s dress and, crucially, know a lot about the chosen designer. As we know, these details are always shrouded in secrecy until the very second a royal bride plants a silken slipper on that aisle. And when none of the possible contenders will even confirm if it isn’t them…well, it’s tricky.

‘Racked with terror, I said yes. Who could say no to a ringside seat to watch history being made?’

Then there are the guests. Not only who might they be wearing, but, um, who might they be? As a working-class Aussie, my knowledge of peripheral royals is…patchy. And I needed to watch at least one episode of Suits.

The day of reckoning arrived and, as instructed, I arrived in Windsor on Friday at lunchtime to prep for our first live show at 7pm that night. Walking the few feet from my car to the BBC meeting point took a good ten minutes thanks to the hundreds of people already milling, waving and wearing Union flags and jostling for a prime vantage point. The chaos of the green room quickly whipped up my excitement. Even watching Alex Jones and Anita Rani share a packet of crisps (there was little time for actual dinner) felt impossibly glamorous. Nothing – not even the windowless room we were all piled into for make-up – could dampen the joy of being involved in something like this.

My Friday night on-air chat with Dermot and Kirsty – a run-through of the possible dress designers – was over in seconds, and then it took nearly two hours to travel the two miles out of Windsor to our hotel. After a virtually sleepless night – terrified I’d snooze through one of my multiple alarms, and regretting the pizza and chips I had with Alex and Ore Oduba for dinner at 10pm – I was out of bed at 4.30am and in the minibus with the presenters and crew at 5am sharp. Excitement was already trumping exhaustion and, as such, I don’t think there’s ever been a cheerier dawn ride.

From 6-9am I studied, rehearsed, had my make-up and hair sorted and changed into my green Cefinn dress – chosen because bright colours are good for TV, but mostly because it was so comfortable. At 10am I was being ushered on to set and all eyes were on me to name the designer. After weeks of everyone being convinced Meghan had chosen Ralph & Russo, my internet combing had thrown up a curveball rumour, seconds before I went on air. With the pressure on to bring new information to the table, I blurted out: ‘A fresh name in the frame this morning is Clare Waight Keller of Givenchy.’ When Dermot asked, ‘Where are you getting this stuff?’ I could feel my face go red as I said, ‘Um…just chat on Twitter.’ I felt foolish. If there was any truth in it, it would have surfaced before now, right?

My task was to come on every 20 minutes or so and discuss either The Dress or arriving guests with Dermot and Kirsty. Any time I wasn’t on air, I was just to the side of the set, sweating over my phone for more info, any info. I texted a friend who knows Amal Clooney and begged her to find out, ahead of her arrival, who she was wearing. I promised fashion PRs they could have my kidneys if ever needed in exchange for intel on which designers Pippa Middleton and Serena Williams had chosen. My helpful husband emailed me multiple media alerts purporting to be ‘facts’ about the dress that I couldn’t think straight. My head was swimming with so much information that I just prayed silently that it would come out of my mouth with at least some coherence.

For me the most stressful parts were in recognising famous faces. (I really should have watched a few more episodes of Suits.) All those hats! I’ve been looking at Oprah Winfrey all my life, but my TV nerves plus her huge hat meant it took me a few seconds to recognise her. So when I thought it was Lady Sarah Chatto under that glorious Dior-inspired straw creation, I didn’t dare say in case it wasn’t. (It was. And now I think I could ID her while wearing a blindfold and just touching her face.) Then Kirsty asked me to identify the main trends coming through in the guests’ outfits. I blanked; in my head all I could think was, ‘Er, they’re all wearing clothes…’ Thankfully I managed to stammer something about darker, jewel colours being big for spring and, as if sent by angels, Victoria Beckham and Chelsy Davy appeared sporting sombre navy.

For all the pressure I put on myself, it became clear very quickly what a small role I was playing. I watched in awe as the production team ushered in guest after varied guest, spinning hundreds of plates at once in several different locations. Here’s the official royal photographer Alexi Lubomirski chatting with Kirsty, and now Alex is interviewing stableyard staff about the horses pulling the carriage. Dermot is interviewing Baroness Doreen Lawrence, and then it’s Ore artfully coaxing cute answers out of toddler-aged spectators.

By 11.45, all I cared about in the world was seeing That Dress. I’d had my fill of guessing and obsessing, and when Meghan stepped out of the car, I drank in every detail. To my relief, it was incredibly easy to talk about it because there was so much detail. The neckline was radical, by royal standards. The style was at once regal but still quintessentially Meghan. That tiara was knockout. The choice of designer (which I got right! What a fluke! That’s going on my LinkedIn!) was a very Markle-esque feminist statement in itself.

Watching the service was a brief chance to exhale in the studio – but only brief. Relax, sure, but also soak up every possible aspect for discussion and dissection back on air. I was mortified to find myself welling up: here was that little boy we saw walking behind his mother’s coffin, now having one of the most beautiful, happiest days of his life – I couldn’t help it. I was trying to hide my face from the two TV pros next to me, so I could have hugged her when Kirsty said, ‘Oh here I go, weddings always set me off.’ Tissues were rushed to set for both of us. I turned to her: ‘They are just so…optimistic aren’t they?’ ‘It is exactly that,’ she nodded. ‘It’s the most optimistic, hopeful thing you can do.’

‘Here was that little boy we saw walking behind his mother’s coffin, now having the one of the happiest days of his life’

And then I had a shock. Suddenly on the TV screen I could see my hairdresser, George Northwood, sitting in the church. I shrieked and pointed, and everyone swivelled to stare at me. He’d cut my hair two days earlier and let me drone on and on about ‘my part’ in the wedding. He nodded and enthused about how exciting it sounded – all the while keeping the gigantic secret that he was doing Meghan’s hair for her wedding reception! I texted him: ‘YOU SNEAKY GIT!’ (It’s OK, we’ve known each other for ten years.) ‘I couldn’t breathe a word, sorry!’ came the reply.

And, like that, it was all over. My 15 minutes of fame consigned to history. I was exhausted but on such a high. The first glass of wine that evening was probably the best I’ve ever had in my life. I want to thank producer Catherine Stirk for including me and the wonderful duo of Dermot and Kirsty. Despite all the pressure, they were so welcoming and put everyone at ease, there were times when you could forget it was being beamed to more than 13 million viewers.

I have never experienced anything so thrilling, and likely won’t again. Even the old hands seemed blown away. As Kirsty said to me, usually the ‘big’ news events are tragic, so to be involved in one so joyous is rare and special. I think the only people who could have possibly had a better time than me on 19 May would be the Duke and Duchess of Sussex.

Comedian Miranda Hart on her biggest challenge yet

Fearne Cotton: ‘I realised how far from human I felt: stressed,...

What to see at the cinema this March

Renee Zellweger is starring in this new Netflix original thriller

Stacey Solomon: ‘I’m myself, with all the flaws’