Struggling with the terrible twos or rebellious teens? Then why not look to the heavens, says astrologer Carolyne Faulkner. She reveals how the stars really can help with those tricky life stages ILLUSTRATIONS: EVE LLOYD KNIGHT

When it comes to parenting, astrology can be an invaluable tool – helping us understand why our children (or our grandchildren, nephews and nieces, for that matter) behave the way they do.

You don’t have to know your child’s full natal chart (a snapshot of stars and zodiac signs at play at the moment of their birth) for the following tips to be useful, but if you do want to then you can plot it using an online tool such as the one I created at dynamicastrology.com.

As a mother, grandmother, auntie and godmother, I know that astrology has helped me navigate the challenges of life with children, from birth through to the teenage years. I hope it helps you, too.

Your child’s star sign can provide some insight into their infant behaviour under the impact of the moon, which is all about nurture. 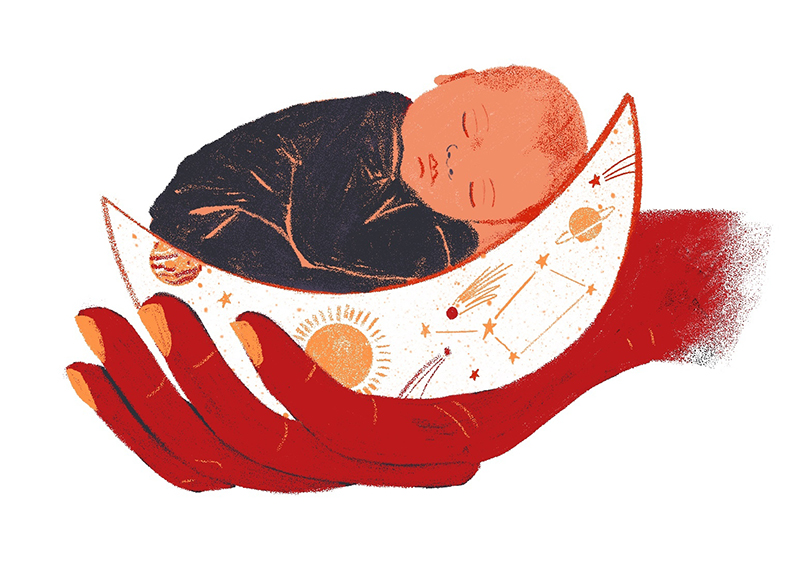 Fire sign babies (Aries/Leo/ Sagittarius) are the natural explorers of the zodiac, so sleeping is often fractious as they demand affection, attention and adventure. Earth signs (Taurus/Virgo/Capricorn), meanwhile, enjoy routine, thrive when they know what’s coming and are quick to form habits. The Air signs (Gemini/ Libra/Aquarius) are often unpredictable: they crave stimulation, so are unlikely to settle into a fixed routine readily. Finally, those sensitive water babies (Cancer/Scorpio/Pisces) delight in the dream world, so shouldn’t have many issues with food or sleep, although they are more likely to require parents to be close by.

Approximately every two years, the planet Mars ‘returns’ to the sign it was in on the day of our birth – contributing to the infamous ‘terrible twos’ phase. The planet of war, Mars governs energy and how we learn boundaries, and will set the scene for your child attempting to assert themselves in the world.

The ferocity of the Mars Return will depend on what star sign your child is. While Libran and Gemini babies are generally not prone to angry outbursts, each of the signs has a different angle that they are agitating for. Fire signs are looking for attention and the right to explore, while earth signs want to be respected, seen and heard. Air signs are fighting for independence and freedom, while water signs want their feelings to be considered – and to get their own way.

It can be extremely unnerving for children to take their first steps into the wider world without their safety net.

Some pre-schoolers are fearful of the unknown, which derives from feeling out of control (although most air and fire signs can’t wait to explore a new environment and will happily wave you off). This process stems from the movement of the planet Neptune, which children often begin to feel the effects of from around three to three-and-a-half years old: it can amplify their imaginations, trigger inspiration and creativity– and also magnify anxiety.

Between the ages of three and four, the planet Saturn forms what is known as a ‘semi square’ to their charts. This is a process which helps prepare children to discern reality from their fantasy world, which also coincides with them attending school or nursery and experiencing authority figures from outside their family circle. This may also trigger separation anxiety, meaning children often view parents as their very ‘life support’. It could be wise for a parent to prepare them for this by explaining the new routine and sticking to it as much as possible to help them feel secure. 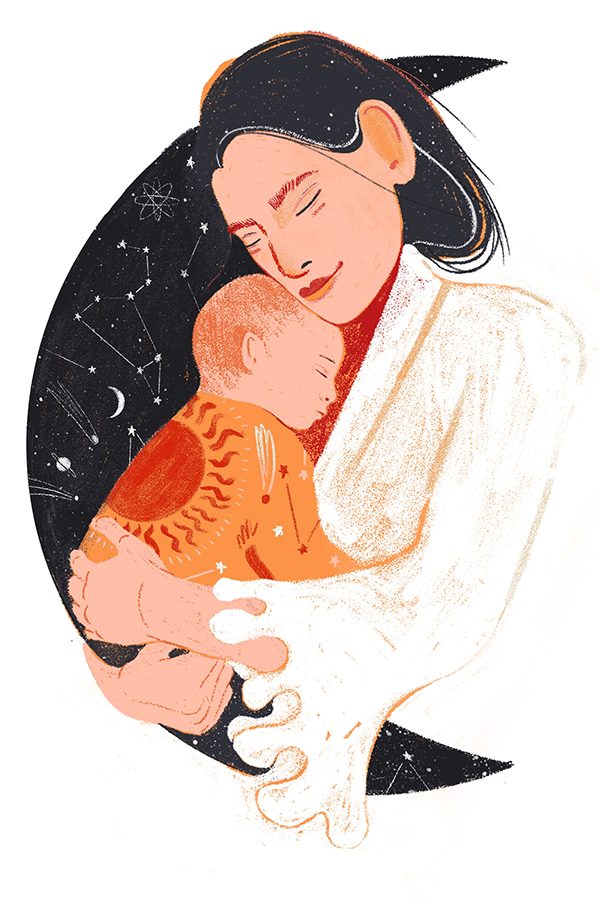 Your child’s first major astrological impact is known as the Saturn Square Transit, when Saturn is at 90 degrees to its original position in your child’s birth chart – this influences the beginning of their path to adulthood.

I often describe a ‘square’ as a time for change, and this impact is usually challenging as children begin to notice mixed messages in their immediate environment. If these are happening at home (for example, punishing them for angry outbursts while simultaneously allowing them to hear us arguing with a partner), it can lead to insecurity, an inability to trust adults– and could set the scene for a full-on rebellion later.

Speaking of rebellion, the planet that governs just that is Uranus, which forms a semi square to their chart now, too, so as parents and guardians we must be very aware of not going to extremes at this stage either.

Saturn in the sky forms a 180-degree angle (which is known as a direct opposition) to where Saturn was positioned on the day of your child’s birth.

Both Saturn and Uranus impact us all every seven years or so – think of the seven-year itch – although this is the first major Saturn opposition that your child will face.

The teen years (especially from around 14 to 16½) area direct effect of how the first transits were handled at around the age of seven. So if they kicked back then against mixed messages from adults, they are likely to do so much harder this time around.

Subconsciously they are seeking authenticity and consistency – and when a teenager encounters any form of authoritarian abuse, their rage can set in.

This Saturn opposition is often a time when resentment builds up and a teen may turn inwards, particularly if they are faced with people they perceive as inauthentic. As a parent (or a significant adult of any kind), it is paramount to keep the lines of communication open.

Meanwhile, Uranus in the sky forms a 60-degree angle (known as a sextile) to its original position on the child’s birth chart. This planet also plays a key role in a teenager’s life, bringing a rebellious and revolutionary spirit. This is often the time when they decide what they want to do or be in life, and it’s important that you don’t laugh at them or over-encourage them – they will either hold themselves to ransom for dreams that no longer suit them, or they may stick at an idea just to rebel against you.

The solution is to tell them to research how they can make it happen – and that you’re there to help if they wish.