With a new series of the mega-hit Sex and the City sequel And Just Like That… already in the pipeline, Joanne Hegarty meets the stylist behind the showstopping clothes, Molly Rogers.

Costume designer Molly Rogers is talking to me wearing a jumper that’s inside out. The stylist who dressed Carrie, Miranda and Charlotte in the hit Sex and the City spinoff And Just Like That… has managed to find the time to put on some lipstick. But she says her own wardrobe is like the cobbler’s children who have no shoes. ‘That’s me when it comes to clothes. All my energy goes on dressing other people. I should make more of an effort, I know!’

This year’s most talked about TV wardrobe is set to make a return after the series ranked in HBO’s top ten across its movie and series debuts and was recommissioned last month.

What’s more, Molly promises there’ll be more standout style moments to come in the next season. In the meantime, she gives an exclusive insight into what it was like to dress Sarah Jessica Parker, Cynthia Nixon, Kristin Davis and the rest of the cast of the show, and opens up about the real-life dramas behind the scenes. 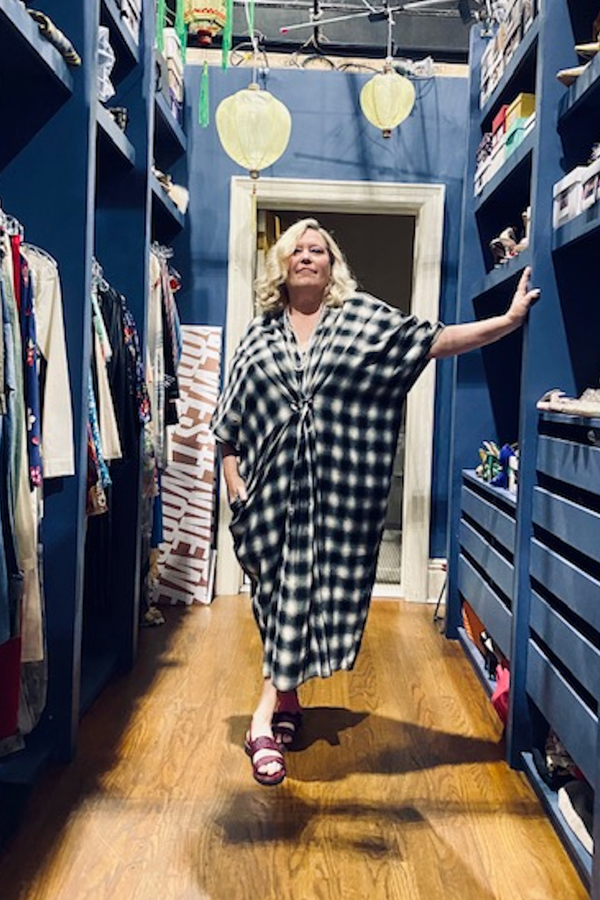 One thing the wardrobe department never had to contend with on the original series of Sex and the City was the glare of social media, which Molly says presented quite a challenge.

As soon as the cameras started rolling on And Just Like That…, hordes of fans began following the cast around New York, posting photos and videos for the world to scrutinise on dedicated Instagram accounts. ‘We felt like we were getting hyper-judged from the first day of production,’ says Molly. ‘It was crazy. The minute the cast came out of their camper vans, they were filmed – and the discourse was all about what they were wearing. On Sex and the City, nobody had seen the clothes, sets or scripts. This time we didn’t have that luxury unless it was filmed indoors.’

THE LOVERS AND HATERS

Some in the fashion community loved the costumes, others did not. ‘Initially, I tried not to read the reviews,’ explains Molly, ‘because I knew it wouldn’t be healthy. But I had a friend who sent me every single negative comment. It was a running joke between us. He said he did it to keep me grounded!’

Molly managed to keep her composure thanks to a thick skin developed while working as Patricia Field’s collaborator on the original Sex and the City, and also because she soon realised a lot of the comments were incorrect. ‘The one report that did get to me – because it was one of the early ones and I felt like it was tainting us and not giving us a fighting chance – was a headline about fast fashion.’

Fans were aghast that Carrie Bradshaw (Sarah Jessica Parker’s character) was wearing a dress by Forever 21, an LA-based fast-fashion retailer, and the costume department was accused of not caring enough about the environment. ‘That was unfair,’ says Molly. ‘There was no label on that dress, so we didn’t know what it was, yet everyone was up in arms about where it was from. That happened straight out of the gate, and I realised people were after blood.’

But there were positive headlines, too, such as when Vogue did an article on what they hailed as Sarah Jessica Parker’s new ‘Carrie dress’, a £185 powder-blue creation by Norma Kamali. 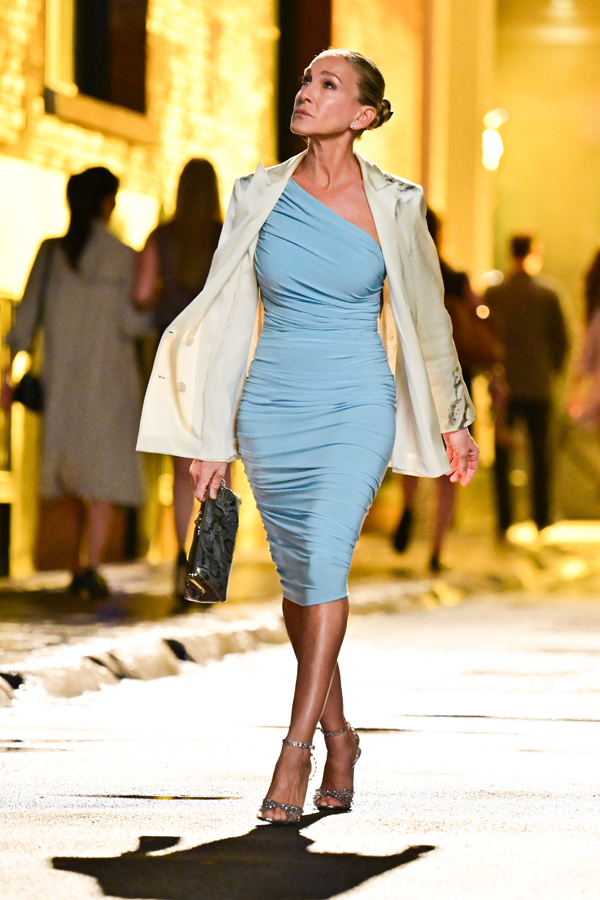 Just after filming began, the news broke that Willie Garson, who played Carrie’s best friend Stanford, had died. His fun-loving character was integral to the show – and his death from pancreatic cancer at 57 came as a blow. ‘Willie had called me before we started,’ says Molly. ‘He told me he was sick, but said his treatment was going well. He had a surgical port on his arm that he wanted me to know about so his sleeves weren’t too short. When he died we had just started episode three [of ten] and everyone felt crushed, but it was especially hard on Sarah.

Chris Noth, who played Carrie’s husband Mr Big, faced a storm of controversy while the spinoff aired, as sexual assault allegations from multiple women emerged. The actor denied these, but, as a result, Noth soon disappeared from the public eye. The show’s creative team also took the decision to erase his final scenes, where Big’s ghost was expected to appear to Carrie when she scattered his ashes in Paris. Molly is outspoken on the subject. ‘There are lots of problems today with erasing people’s lives – it doesn’t sit well with me,’ she says. ‘I don’t think things should be resolved in the court of public opinion. That is frightening; that is like a witch-hunt to me. Have your day in court.’

Molly worked very closely with Sarah and the other two leading actresses – Cynthia Nixon (Miranda) and Kristin Davis (Charlotte) – when it came to picking outfits. ‘All the girls were collaborative and we built a beautiful fitting room ‒ it was just great to be in there.’

Molly, her costume designer partner Danny Santiago and Sarah shared a passion for sourcing vintage gems – and one odd item of footwear struck a chord with real-life shoe addict SJP, as Sarah is known. Molly says: ‘There was one pair that Danny bought from a thrift store that cost next to nothing. They were old and dirty but SJP and Danny fell in love with them.’ The white and black saddle shoe – laced up the front and open at the back – caused much debate. Molly hated them but SJP was determined to get them on screen.

‘I didn’t want them on anyone’s feet, let alone appearing in the show, but SJP had a name for them – Phyllis. She would say things like: “This outfit would look perfect with Phyllis!”’ Phyllis eventually made it on screen when Carrie was in her physiotherapy session.

Not surprisingly, Sarah, Cynthia and Kristin all went through their clothing racks with a fine-tooth comb. ‘We used to call it the kiss and kill process,’ says Molly. ‘We didn’t edit before they came in, we let them do that with us because these ladies are very knowledgeable when it comes to fashion.’

Once each outfit had been signed off and the right alterations came back, the wardrobe department took a photo of the outfit as part of a fun on-set ritual. ‘We had a hotel bell that we rang after each outfit was approved,’ says Molly.

Sarah’s love of vintage was apparent throughout the show, and the platter hat she wore at Mr Big’s funeral was the result of one of many vintage sourcing trips Molly and Danny made to Florida. ‘We did a lot of shopping in Palm Beach because many New Yorkers live there now so the shops are full of evening gowns and all kinds of things they don’t wear in Florida. Their story and everything about them is so interesting… You can’t find that on a rack in a modern store.’ 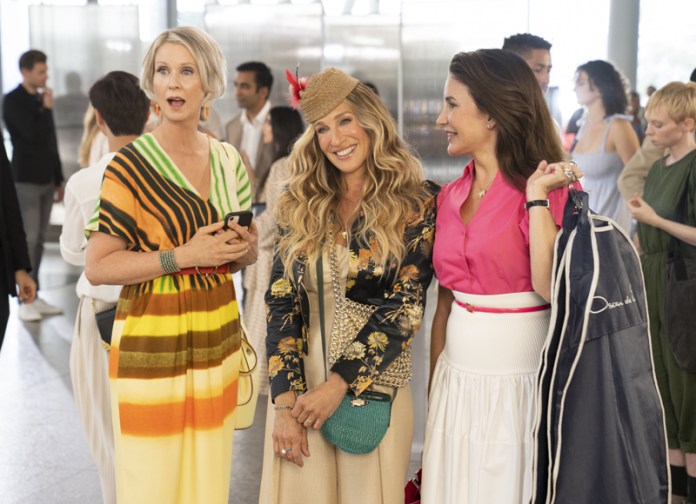 The costume department had a running joke with the male cast members that they were just accessories: ‘It’s fun to treat men like accessories, as women often get treated like that on other shows. For me their fittings are just as important but we would tease them and say, “Nobody is looking at what you’re wearing. You’re just arm candy.”’

According to Molly, Willie Garson’s fittings got the most attention. ‘His wardrobe would be packed full of everything because he was such a flamboyant character.’

Molly is delighted that the characters will return for a second series: ‘I love that they can age and keep telling their stories. At the end of the first series, Carrie kisses someone new in an elevator – life goes on and life changes. The show is about growth. And it was certainly the most fun I ever had at work.’