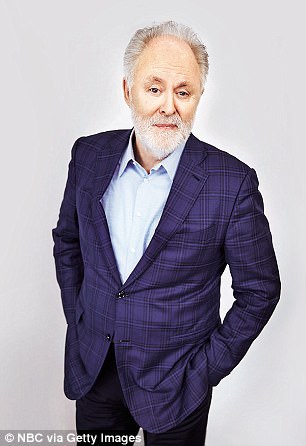 Guilty pleasure? Watching myself act on television. I particularly love reruns of 3rd Rock from the Sun. It’s the only thing I’ve done that I can watch with complete abandon and laugh myself silly.

Where is home? I live in Los Angeles, but my heart is in New York City because so many of my friends live there and I return regularly to do theatre. I always feel at home in London, too.

As a child you wanted to be…? A painter. Even when I was seven years old, I had that talent. I don’t know where it came from.

Career plan B? I was determined to become a painter well into my teens. I grew up in a theatre family – my mother was an actress, my father a theatrical producer – and I did not want to go into the family business. But then I went off to Harvard and fell in with the theatre gang, and when you hear applause and laughter at a young age, you just want more. That was it. I still paint, but just as a hobby and not nearly as often as I’d like.

Who would play you in a movie of your life? I’m probably be the best casting for the more recent years, but I wouldn’t mind Ryan Gosling as my younger self – he’s just not quite tall enough. I’m 6ft 4in. [Gosling is just 6ft.]

Biggest bugbear? Hypocrisy – there’s a lot of that around these days, mainly political.

Earliest memory? Standing on the front doorstep of our new house in Yellow Springs, Ohio when I was about two and a half. We lived in about 10 different places when I was a kid because of my father’s career – we were always moving.

Secret to a happy relationship? A shared sense of humour.

Your best quality? My optimism. But I am quickly disappointed.

And your worst? My subsequent pessimism.

Most romantic thing you’ve ever done? I was in London for eight months last year filming the Netflix drama The Crown, where I played Sir Winston Churchill. I only had to work about half the time. My wife [Mary Yeager, a history professor at UCLA] and I took frequent trips to European cities – St Petersburg, Stockholm, Amsterdam and Paris. Our goal was to make them as romantic as possible.

Who would you invite to your dream dinner party? Everyone I met at LAMDA when I studied there 50 years ago – and all the alumni I’ve met since. Top of the list would be Dame Harriet Walter, Jim Broadbent, David Oyelowo and David Suchet.

Advice to your teenage self? Start writing now. It’s a source of creativity that doesn’t depend on other people hiring you. I’ve written 11 books for children.

Cat or dog? Dog. Particularly an Australian shepherd dog named Blue, who used to be a big part of my life.

The most memorable Brit Award moments of all time

EMOTIONAL TIES: Fenella Woolgar on the little things that mean the...