From orgasms to politics to parenting, Loose Women has been tackling the topics viewers really want to talk about for 20 years. TV critic Michael Hogan reveals how it’s kept us all hooked.

Here come the girls. When Loose Women sashayed on to our screens on 6 September 1999, its debut panel comprised Nadia Sawalha, Jane Moore, Kaye Adams and Karren Brady (long before she became a baroness).

They discussed issues of the day such as the hunt for Jill Dando’s killer, Midland Bank changing its name to HSBC and Ally McBeal winning big at the Emmys. Not even the most optimistic ITV exec would have guessed the show would still be going strong 20 years and an astonishing 3,300 episodes later. So what makes it so successful?

Well, watching Loose Women feels like being a member of a club that’s always welcoming and invariably entertaining. As four straight-talking women debate the day’s headlines and discuss their lives, it’s like a catch-up coffee with friends, enjoyed from the comfort of your sofa. Nobody minds if you’re wearing trackie bottoms or covered in crisp crumbs, which can be a bad look in Starbucks.

It’s a feminist force for good, as Carol McGiffin once pointed out: ‘We’re the only show on TV where women are allowed to have an opinion without a man anchoring us or controlling what we say.’

Loose Women is a televisual version of social media: the sort of topical chat that you might get on Twitter – but crucially, without the trolls or typo pedants. For those without a smartphone permanently welded to their paw, the show is a virtual water cooler, a safe space to gather and gossip.

Most of all, Loose Women never fails to make you laugh. And who doesn’t need that these days?

‘It was the best therapy I’ve ever had!’

History books offer various theories as to when humans first started talking to each other. Estimates range from around 50,000 to 200,000 years ago. But regardless of the timeline, it’s highly likely it was a woman who got the conversation started and, ever since, the female of the species has always found a way to talk. Which may explain why, in the throwaway landscape of television, Loose Women has remained a much-loved fixture on our screens for 20 years.

The lifeblood of the show has always been its ability to showcase female conversation – casting a panel of women from all backgrounds and life stages to get tongues wagging about the issues of the day.

By the time I joined Loose Women a decade ago, the team had spent ten years working up probably the warmest, most familiar relationship with an audience of any show I’ve worked on.

As TV institutions go, it was up there with joining the cast of Coronation Street or EastEnders. Stepping into a show I’d spent years watching, with women I felt as though I knew and yet had never met, I was terrified!

My imposter syndrome hit new heights. Would they like me? Would the audience find me as irritating as I find myself? Would I be able to hold my own among the sassy, razor sharp women who were the linchpins of the show?

But I needn’t have worried. In true Loose Women style, I was broken in with a girls’ night out where the booze and conversation flowed. By the time I started on air the following week, the hangover had passed (just!) and what followed were some of my happiest times professionally.

The show was at its peak, going on to win its first National Television Award that year. This was a vote of confidence to keep doing what it was doing, and to hell with the critics who dismissed it as ‘man bashing’ and ‘sexist’.

But for all its simplicity – four women talking – the show is not an easy one to make. By the time it airs at 12.30pm, the news agenda has already been through exhaustive cycles on Good Morning Britain, BBC Breakfast, Lorraine and This Morning. So the task for Loose Women is always to lean into the day’s events, while re-energising them through a female lens.

The production team arrive in the early hours of the morning to assemble the most relevant stories of the day, which are then put to the on-screen panel in the daily 8.30am meeting to ascertain which topics make it to air four hours later.

The turnaround is fast and furious and the meeting is awash with coffee, toast and lively debate. Bleary-eyed, animated exchanges that drilled into our many different life experiences were shared with the love, challenge and support women do so well. At times they were up there with the best therapy sessions I’ve ever had.

If a topic was something we all agreed on, it didn’t work. Loose Women is a debate show and without differing viewpoints it’s just four people agreeing on something. For that reason, working on the show was so enriching in terms of building friendships with women I may never have otherwise come into contact with, yet who added so much value and perspective to my way of thinking.

We were cast to be professional mates – and wonderful, unlikely friendships grew from that pool of women. We shared so much of our lives in those morning meetings and on screen that intimacy and trust built quickly.

When I joined the show I was a relatively new mum, sleep-deprived and full of love and the promise of my new life as a soon-to-be wife. But across my time as a Loose Woman I separated from the father of my son Ben and became a single mother.

As a result, I would often find myself swallowing tears as we delved into topics that crossed over into my troubled home life. And every time I felt my professional poise slip and my voice cracked or a lone tear streaked down my cheek, I was almost rugby-tackled with a wall of support from the women I sat alongside who offered up care, advice and, often, a much-needed hug.

For many, be it Lynda Bellingham or Coleen Nolan, they’d been there and come through the other side as single parents. And their shared experiences and pearls of wisdom were more helpful than they’ll ever know.

Sometimes I needed to hear the battle cry of Carol McGiffin to restore my sense of fight. Or the hours of listening, caring conversation offered by the likes of Denise Welch, Jane McDonald or Lisa Maxwell, who’d call me at home to ‘just see how you are’.

For me, that’s a large part of why Loose Women is still thriving – because it celebrates women’s women. The kind of women who mirror the audience’s own friendship groups.

Jane McDonald was one of the ‘Loose Legends’. Her years working crowds in clubs and then on cruise ships had given her a shorthand with the Loose Women audience. She was funny, passionate, kind and whip-smart, with a bank of cracking one-liners.

I remember being with Jane in the Groucho Club – a media hangout a million miles from her native Wakefield. The staff had stars in their eyes, falling over themselves to please her.

‘Is everything to your liking?’ asked one wide-eyed waiter.

‘Oh yes, love,’ she said. ‘I feel right at home… we don’t decorate much either.’

Loose Women was my first taste of daytime television, having spent years on the shiny floors of Saturday-night shows such as Don’t Try This at Home!, Pop Idol and The X Factor. The relationship with the audience couldn’t have been more different. Before, people would whisper, point or try to take pictures from across the aisle in the supermarket. But once I started on Loose Women they’d pull up their trollies next to mine and stop for a chat. ‘How’s your Ben?’ they’d ask. ‘Is Jane’s mum on the mend?’

You can start to feel like a friend, and that was the same for the stars who appeared on the show. Even some of the biggest names in the business would get giddy about being on it. And none more so than my lifelong idol George Michael.

I almost fell off my stool during an ad break when the executive producer spoke in my earpiece in hushed tones.

‘Don’t freak out,’ he said, knowing I was a superfan, ‘but I’ve got George Michael on the line. He’s at home watching and wanted to call in. He’ll be live with you off the back of this break. Don’t tell the other women – it’s a surprise.’

My poker face was tested to the max in that moment as the director counted me back in off the break and I introduced George. He was as excitable as we were and, in conversations that transpired later, turned out to be a big fan of the show. When I came off air the producer told me George had left his number to pass to me.

‘But what if I do? I can’t trust myself. Can you give him my number and tell him he’s welcome to call me any time?’

‘So you want me to call him back and tell him you don’t trust yourself not to get drunk and call him?’

Weeks later I had been guest hosting This Morning with Peter Andre and as I drove home from the studio I got a call from a number I didn’t recognise.

‘Hi. It’s me. The singing Greek,’ said the caller.

Singer? Greek? I put two and two together and came up with Peter Andre. ‘Hi. You OK?’

‘Yeah, I’m in the bath and was just ringing for a chat.’

‘You’re in the bath? At This Morning?’

‘George Michael? You’re in the bath. Calling me. Are you naked?’

‘Err. Yes, that’s how people bath,’ he laughed. ‘Oh my God. I might actually crash!’ And that was the beginning of a treasured friendship.

But I digress. There’s a reason why celebrities and the people in the supermarket love Loose Women. It’s an honest reflection of how women communicate. We can be insightful, glib, childish, impassioned, informed, challenging, sarcastic and temperamental. Female conversations travel in so many lanes and the show encourages and celebrates that.

I hope Loose Women continues the conversation for another 20 years to come. Happy birthday, ladies.

Bust-ups, pups and a live ‘whoops’

Coleen Nolan and Kim Woodburn’s feud first ignited in the Celebrity Big Brother house. When both were on Loose Women the following year, a big row climaxed with Kim storming off set.

The star sparked a heated debate after revealing that her daughter Molly, then three, helped her with the housework. Sherrie Hewson suggested that she was setting a sexist example.

Unaware the show was going out live, the late comedian was unceremoniously ushered off set during the next ad break for calling actor Russell Crowe a ‘piece of f***ing s***’.

Robbie Williams stormed on – to excited screams from the audience – after his wife Ayda Field admitted that she’d faked orgasms. ‘Not with you, baby,’ she reassured him. 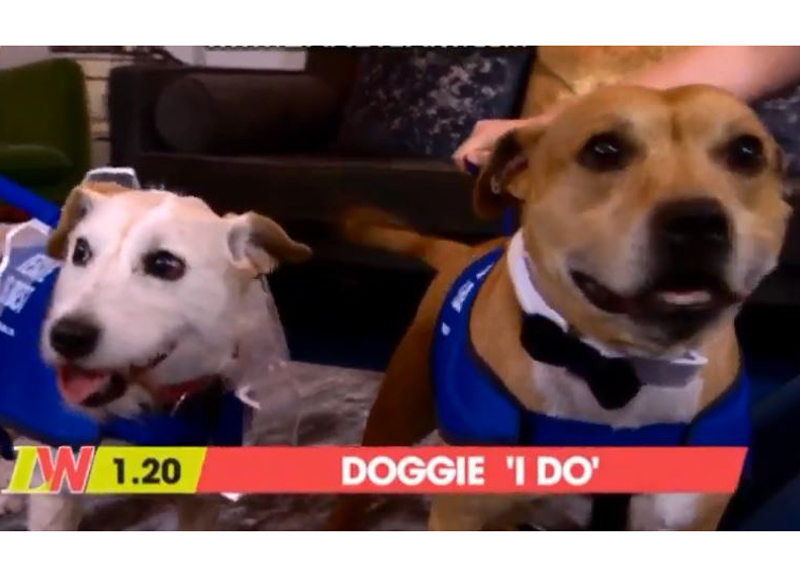 During last May’s barking mad royal fever, Kaye Adams officiated at the canine ‘puptials’ of ‘Prince Hairy’ and ‘Meghan Barkle’. You may now lick the bride…